Contractors are increasingly finding it difficult to install rooftop heating/AC units on some of the larger shopping malls, warehouses and manufacturing facilities. Acres of roof and multiple levels put many installations out of the reach of a crane, while crane setup space is disappearing as parking lots go underground.

The next expansion at Yorkdale Mall in Toronto, for example, will see above ground parking all but disappear. “They’ve got nine hundred HVAC units on the roof and probably about a million feet of gas pipe. How do you deal with a unit (when it needs to be replaced)? You can’t crane on underground parking,” remarked Ian Bergeron, vice president, safety and legal affairs for Sprint Mechanical Inc. in Toronto.

The company’s president, Albert Salvatore, and his management team decided there was really only one solution. They needed a helicopter.

or that had the insurance, the Transport Canada approvals, a base of operations, the mechanical staff and the piloting staff,” said Bergeron.
By happy coincidence, Toronto-based Four Seasons Aviation Ltd. was looking to expand from its seasonal work with movies and sporting events to something that they could do year round, like replacing rooftop units.

Established by owner-pilot and president Dave Tommasini in 1987, today it operates from Toronto Downsview Airport and will soon move to a new larger hanger at Brampton Airport.

Bergeron met Tommasini on a job site in 1992 when he started exploring the use of helicopters for lifting HVAC equipment. He joined Sprint in 2012 as helicopters were becoming the lift method of choice for the company. The two companies have worked together on many projects. 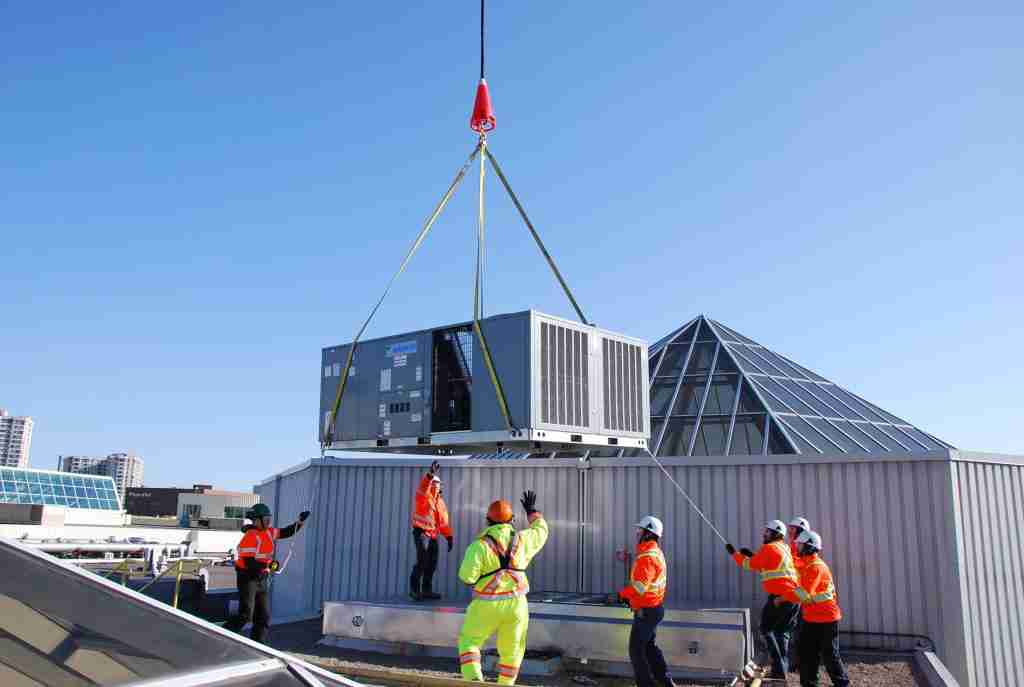 The crew on the roof guides the new unit into place.

It wasn’t easy for Sprint and Four Seasons to find a helicopter that would meet their needs. It had to lift the biggest rooftop units and it had to be certified to fly over busy city areas while doing so.

Sprint spent two years researching and testing helicopters. “We hired and used just about every heavy lift machine you could imagine,” remarked Bergeron. Many were ruled out for being too small, too big, too expensive or too expensive to repair.

They finally settled on a 1956 Sikorsky S58T – a machine with quite a history. Identical to the one that served in the Mercury space mission and pulled Allen Shepherd’s space capsule from the ocean in 1961, it served with the French military for many years and was used in Vietnam.

Prior to being acquired by Sprint in September, it was completely rebuilt by Texas-based California Helicopters, which owns the manufacturing rights. The long and painstaking renovation began in 2008. Sprint purchased it the week it did its first test flight last July and picked it up in September.

Today it is much better than new. Every piece, inside and out, was refurbished or replaced. Originally it would have a single piston engine; in 1976 it was converted to twin engines and today it has twin Pratt & Whitney PT-6 turbines, allowing it to fly at altitudes up to 12,000 feet, using about 120 gallons of fuel per hour.

The upgrades resulted in a Category A certification, the highest certification for helicopters and a must if it is to operate over busy city areas. The certification requires that the airplane can take off and land on one engine if the other engine fails.

“That means if we have a load suspended and we lose one engine, the load doesn’t come down like a rock. You can actually land it,” noted Bergeron.
In addition to the ability to lift 4,500 lbs., a spacious interior cargo space – 18 feet long and 6’2” high – can carry up to 17 people or 4,000 lbs. of cargo. Four skids can be loaded with a forklift through the side door and swing open tail section.

As well as their own lifts, Sprint has done a number for other mechanical contractors, structural steel contractors, auto plants, etc. They have a published price list for GTA area malls. Lifts are typically done in the early morning, often Sunday, before the mall opens. Start to finish, removing an old rooftop and lifting the new one in place usually takes less than an hour.
One project involved 146 lifts, all done in less than a day. Another large warehouse project required 88 lifts in 2-1/2 hours. The advantage of using a helicopter is that lifting can be done very quickly – if everything fits.

If curbs have to be modified because they don’t fit or the rooftop doesn’t fit the curb – delays that require the helicopter to be shut down while adjustments are made – the cost can increase. However, one advantage of using a helicopter owned by a mechanical contractor is that they know what’s involved and might be a little more forgiving. 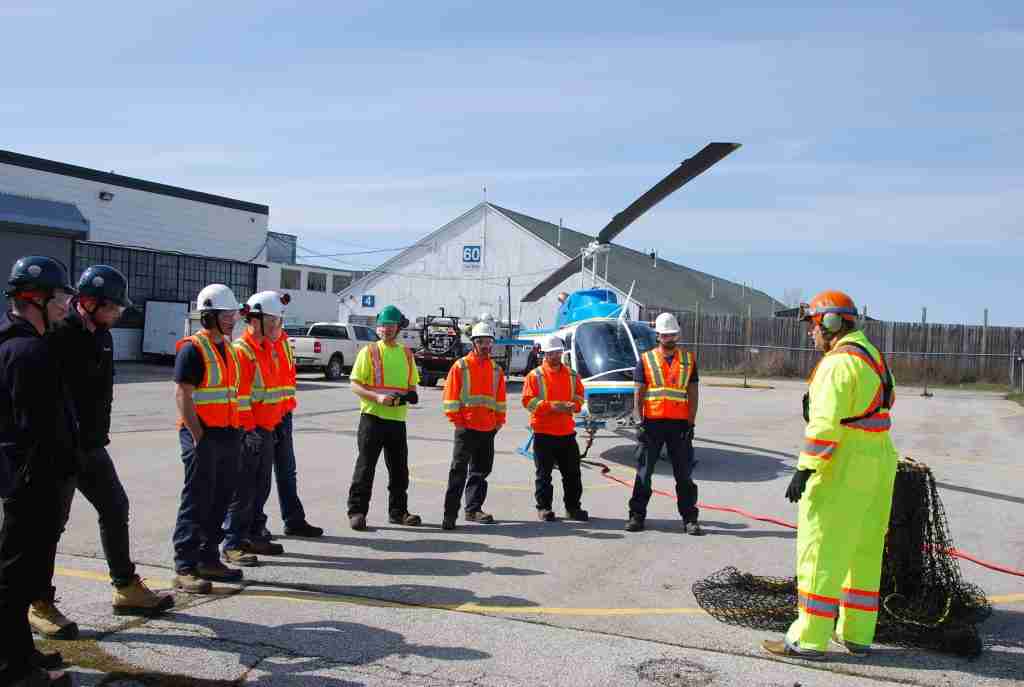 Everyone involved in the lift participated in a training session the day before.

A “Helicopter Lifting Plan and Hazard Assessment” has to be filed for every job.

“We write the plan, we go through the plan, we train the plan, we do the plan, we fly the plan. In construction, most of the losses occur when people don’t have a plan,” remarked Bergeron.
For an April 14 lift at the Bramalea City Centre Mall in Brampton, Ont., the plan was 44 pages, and this was only to lift one rooftop unit. Every detail is covered – the flight path, the lift procedure, there are detailed diagrams and photographs of the job site and the equipment, emergency procedures, communications, etc.

Everyone involved undergoes three hours of training prior to the lift – two hours in the classroom and one hour working with the helicopter. “We don’t use anybody without training; there’s just too many liabilities today.”

Bergeron emphasized that the job was being done for a fixed price to, among other things, reduce time pressure on the crew and minimize mistakes. “The job it to do it safely and do it properly.”

One thing that is unique about lifting with a helicopter is the downwash from the rotor blades. It has to be factored in when calculating the weight of the load and workers have to be dressed for it. Along with the usual safety equipment, hardhats with chinstraps are a must, as is hearing protection and goggles to protect eyes from flying debris.

The lift itself took place under sunny skies, with the helicopter flying from its base at Toronto Buttonville Municipal Airport at 7 a.m. and arriving at the job site 10 minutes later. Tommasini’s experience showed with the ability to move the helicopter in tiny increments as required by the crew on the roof.

Purchasing the helicopter has proven a significant advantage for Sprint Mechanical in the very competitive bid and spec commercial market and it is drawing considerable interest from other contractors, noted Bergeron.