Packaged multi-zone systems thrived primarily between 1960 and 1980. These large heating and cooling beasts typically consisted of rooftops in cool and temperate regions of North America. Many can still be found in place today. However, present-day counterparts consume far less energy.

Usually, packaged multi-zone air handlers are installed at institutional facilities or commercial buildings, selected based on their ability to provide simultaneous heating and cooling to different zones within the structure.

These hot deck/cold deck air handlers use a large supply fan (and often a return fan as well) to force air through a chilled water or refrigerant coil and a hot water coil. On the supply side of the stacked coils, zone dampers on each takeoff control and mix air for each zone. 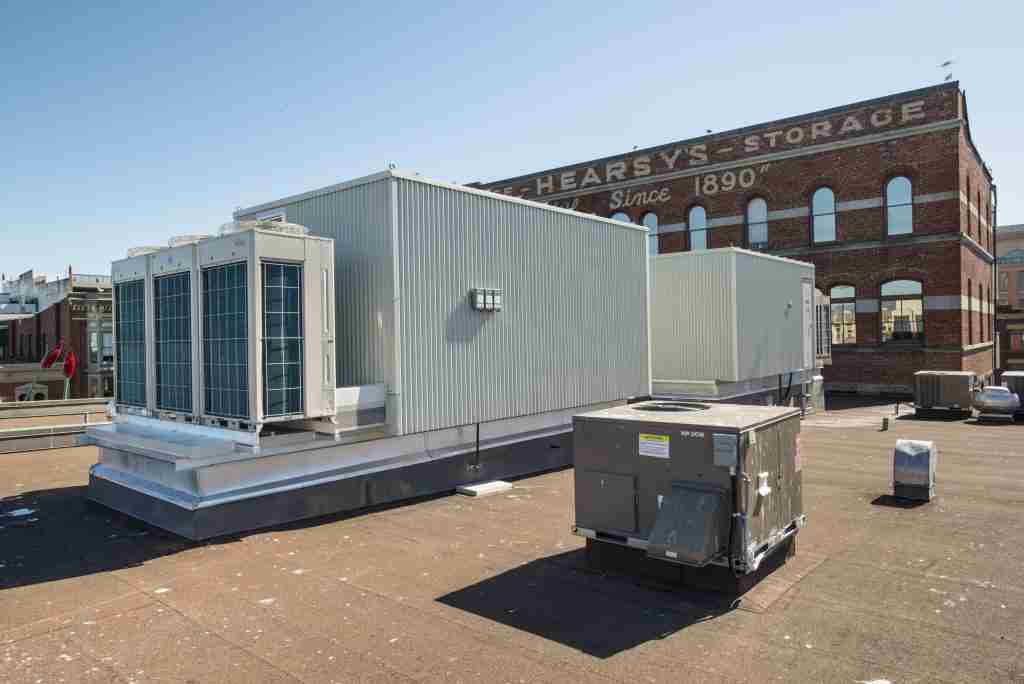 From left, the team behind the Rithet Building HVAC project – Jay Bull, Tom Pederson, Tim Sykes, Tyler Little and Steve Chamut – gathered for a photo in front of the building.

Victoria, B.C. has a climate well suited to multi-zone, rooftop air handlers. The area is known for temperate winters and mostly tolerable heat and humidity during the summer months. Long shoulder seasons also mean that heating and cooling requirements between the north and south side of a building can vary substantially: perfect for a system that can serve dissimilar zones.

One of the oldest structures in Victoria, the Rithet Building, was constructed in the late 1860s. It has, at the very least, two claims to fame. The prominent external cast iron columns make it one of British Columbia’s finest examples of West Coast Iron Front architecture. In the lobby, the focal point is a brick well that served as early Fort Victoria’s only fresh water source.

In the mid-1970s, ductwork was added to the 25,000 sq. ft. brick building and three Lennox multi-zone packaged units, each roughly 30-feet long, were installed on the roof. One of these multi-zone units served only the upper floor and was recently replaced with multiple packaged RTUs.

The other two packaged units remained in service, each serving seven zones. A boiler downstairs provided ample hot water for the big heating coils. Each unit had an integral DX (evaporator) coil served by a multi-stage compressor.

“The Rithet Building now contains offices with some retail space below and it needed to remain fully occupied for the duration of any HVAC retrofit,” reported Tom Pedersen, engineering technologist at Avalon. “The fact that it’s a Landmark Heritage Building further reduced our options when it came time to select a new system.”

Instead of overhauling the existing multi-zone rooftop units or replacing them with new versions of the same technology, Avalon designed a multi-zone air handler that employed air-to-air heat pumps.

“After looking at a few different options, we determined that new, custom-built air handlers would be best,” said Pedersen. “Unlike the originals though – which had only two coils – the seven fan coils inside the new units are served by VRF (variable refrigerant flow) condensers with a heat recovery feature for load sharing. The cost increase over a new factory multi-zone unit was marginal, but the difference in energy consumption was impressive.” 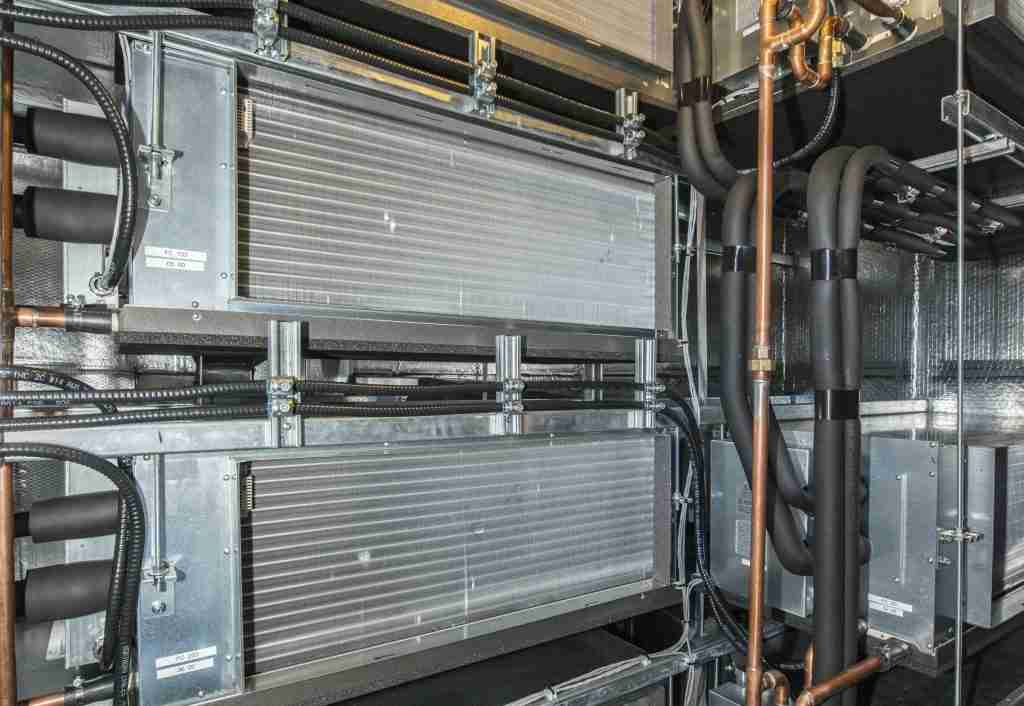 Once settled on VRF equipment, Pedersen’s biggest design hurdle was static pressure; could the fans on the evaporator coils provide the air movement needed? Much of the existing ductwork was concealed and the mechanical “as-built” drawings were outdated and unreliable. After calculating the pressure loss based on these old drawings, Avalon took the extra precaution of hiring an air balancing company to determine the true pressure drop. Both the calculated pressure drops and the measured pressure drops fell within the manufacturer’s published capabilities for their high-pressure fan coils of 0.4” to 1.0” wg. for each duct run.

Of the six or seven VRF manufacturers that Avalon was considering, the field was narrowed to three; the only locally available VRF systems that could meet the static pressure requirements in the fan coil sizes required.

Ultimately, the coil dimensions reduced the choice to a single manufacturer. Pedersen selected a Fujitsu Airstage system. The evaporator coils, which range from two-and-a-half to five-tons, were narrower and higher than those offered by the other manufacturers. This profile better suited the existing, roof-level duct takeoffs that Pedersen needed to transition into.

“I was glad that the Fujitsu systems fit,” said Pedersen. “We’ve been pleased with them on previous ductless applications. Using the high-static fan coils on this job was a first, though.”

“I’m not aware of any other retrofits quite like this one, said Pedersen. “We issued a conceptual design bid, knowing that the fabricator would need to improvise on many of the details.” Capital City Refrigeration, Victoria, won the bid. They worked closely with JB Sheet Metal during the ground-up build of both new units.

“This was a bid-spec job, but it progressed like a design-build,” said Tim Sykes, who founded Capital City Refrigeration with Tyler Little. Work on the new air handlers began in March at JB Sheet Metal. The timeline was tight in order to have both units ready to install during the spring shoulder season.

Owner Jay Bull and other fabricators at JB Sheet Metal built the frame, cabinet and duct takeoffs, while Capital City technicians filled the boxes. With the return fan and filters on one side and ductwork on the other, coils, power components, controls and refrigerant lines made for a tight fit in the middle.

Despite the adequate static pressure capability of the Fujitsu units, Avalon wanted an insurance measure that would eliminate the risk of inadequate flow. A small box was installed just above each duct elbow leading down through the roof. Here, a knockout could facilitate the addition of a booster fan in the future. “Now we know it was an unnecessary precaution, but it was cheap insurance,” said Pedersen. “With the systems up and running, there’s even better flow than before the retrofit.”

Sykes would periodically check with Tim Young, sales engineer at Fujitsu, on certain aspects of the build, especially in the beginning when they were figuring out how to fit everything into the unit. Support came from the distributor, too. “Steve Chamut, at Refrigerative Supply was a big asset, as he always is,” said Sykes. “On this job we leaned on him a little harder than usual, considering the nature of it.”

The units were tested and commissioned off site with a generator before being delivered and lifted by crane onto the Rithet building; the first one in April and the second a month later. 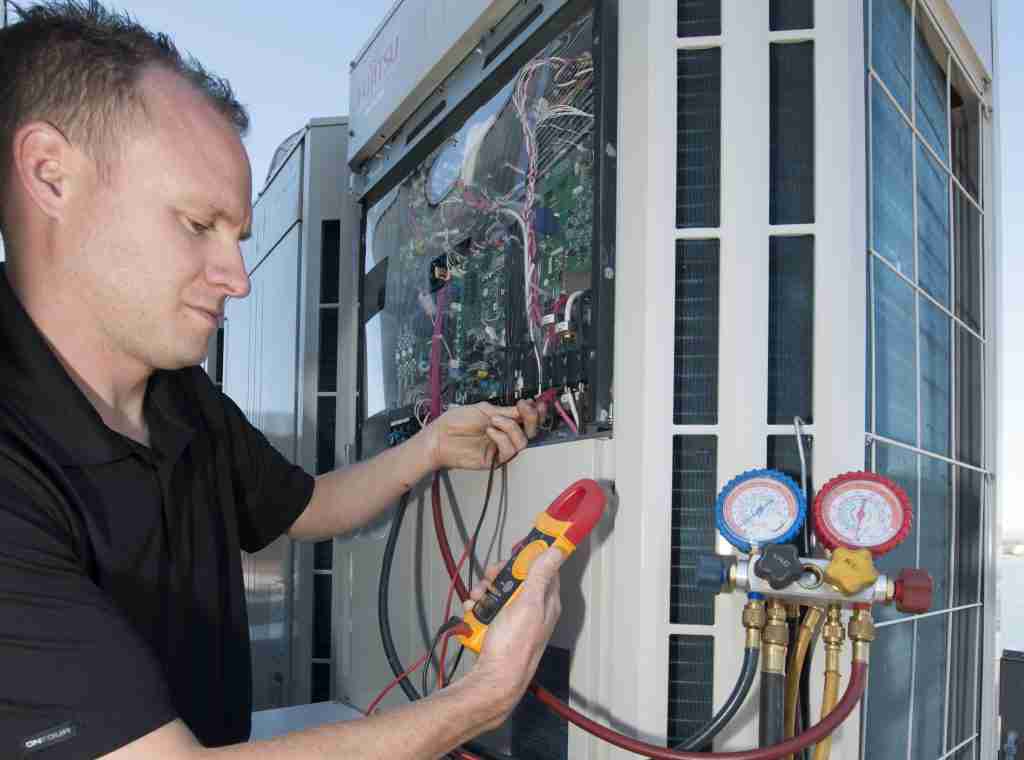 Before delivery, Kerr Controls Inc. completed building control rough-ins while Houle Electric did the power rough-ins. Once on the roof, it took about a day-and-a-half for Capital City Refrigeration to put the units into service. “We made a few set-point adjustments after the install and that was about it,” said Sykes.

“This was not a cheap alternative,” said Sykes. “But given that the building couldn’t be disturbed and that the exterior had to meet Heritage guidelines, I think it was the very best alternative, especially considering lifecycle costs.”

Rachel Ruhl, based in Manheim, Pennsylvania, is a writer whose work focuses on the plumbing/mechanical and HVAC trades. She can be reached through this magazine.