It’s different now. Ten years ago in 2006 the Canadian Mortgage & Housing Corporation (CMHC) created the Equilibrium initiative for homebuilders, asking them to build the most energy efficient sustainable homes they could.

It provided cash to 12 successful bidders who each built a house or two with green features. They all tried different things. The CMHC measured energy savings and so on. The builders learned about green buildings, but they weren’t very close to net-zero, or to commercializing better production homes. Canadians were hit with the global financial crisis a couple years later. We weren’t buying anything we didn’t have to buy.

It has held several stakeholder meetings, bringing together experts in sustainable homebuilding: architects, consultants, engineers from across Canada and the U.S. and from the five builders involved. They have collectively defined the ideal net-zero production home and leading technologies.

They have acquired a key sponsor: Owens Corning, the developer of new building envelope technologies, including some of the thermal bridge prevention concepts and passive house principles. The builders have started building net-zero production houses. This year they opened them to the public. Plumbing & HVAC visited the Guelph and Ottawa projects.

The definition of a net-zero house is that it generates as much energy as it uses. The most sensible priority is to minimize energy use first, then add appropriate mechanical equipment and energy-generating technology.

The net-zero detached homes in Ottawa (2400 sq. ft.) and Guelph (2000 sq. ft.) are very similar in design. They have triple pane windows, LED lighting and a very effective insulation system; which results in about 1.0 air change per hour. One key insulation difference is that two inches of rigid board is added to the exterior walls and beneath the slab to ensure that any thermal bridges are now enclosed within the envelope.

The builders still install the usual insulation bats between the studs; plus extra rigid insulation inside the basement. Total insulating values in the Guelph homes are about R60 for the attic, R38 for the main floor and second floor, and R33 for the basement.

They also use Van EE heat recovery ventilators and Rheem hybrid heat pump water heaters that collect heat energy in the mechanical room and use it to pre-warm domestic hot water.

“With 1.0 air change per hour we only need 22,000 Btu’s to heat the space. A key issue is to right-size the mechanicals,” said consultant Andy Oding, a senior building science associate for Building Knowledge Canada Inc. of Cambridge, Ontario.

Mitsubishi air-to-air heat pumps are used for primary heating and cooling (20-21 SEER); but in Guelph they added a 30,000 Btu/h gas furnace as a backup in four of the five they built. This provided a feeling of security for potential buyers and helped Reid sell all four pretty quickly.

Heat is distributed through a low/mid velocity air distribution system using 2.5” round flex duct. The small heat pumps run continuously and there is little or no modulating needed. “There is also very little very little moisture in these tight houses,” remarked Oding. “So you never really get to dehumidification mode.”

The gas furnace kicks in at -15ºC and yet does not compromise the net-zero performance of the house because it’s rarely needed with a highly efficient envelope.

Fig. 1: A net-zero home uses about one third the energy of a modern home built in accordance with the National Building Code. (Source: NRCan)

Oding produces a chart (Fig. 1) that shows how a home constructed according to National Building Code (NBC) requirements uses about 100 Gigajoules (GJ) of energy each year, while these net-zero-ready homes use less than 35 GJ. The reduced electricity load is generated by 32 solar panels (8.5 kw) on the roof, bringing the home’s energy use to zero or less.

Not only is the total energy use decreased by two-thirds, but heating, cooling and hot water, as a share of the home’s total, drop to about a third of the energy used. They represent about 75 percent in an NBC home.

Instead, electrical outlet load jumps from 25 percent to 67.5 of energy used. Today Canadians use more computers, devices, televisions, appliances and so on. A family living in a net-zero house could carefully manage its energy behavior and save significantly.

Just by buying a net-zero house in Guelph, the new owners are saving more than $3,200 each year on utilities compared to an EnergyStar home, reported Jennifer Weatherston, Reid director of estimating and innovation. She said the extra cost of the net-zero features is about $55,000, making the mortgage interest on the upgrade about half this amount. So homeowners are ahead on cash flow from day one.

In addition, there is every reason to believe the resale price of the net-zero home will be higher than other homes. Numerous U.S., British, Canadian and Australian studies confirm higher resale values, higher rental rates, higher occupancy rates, lower operating costs and lower capitalization rates for green homes and buildings. 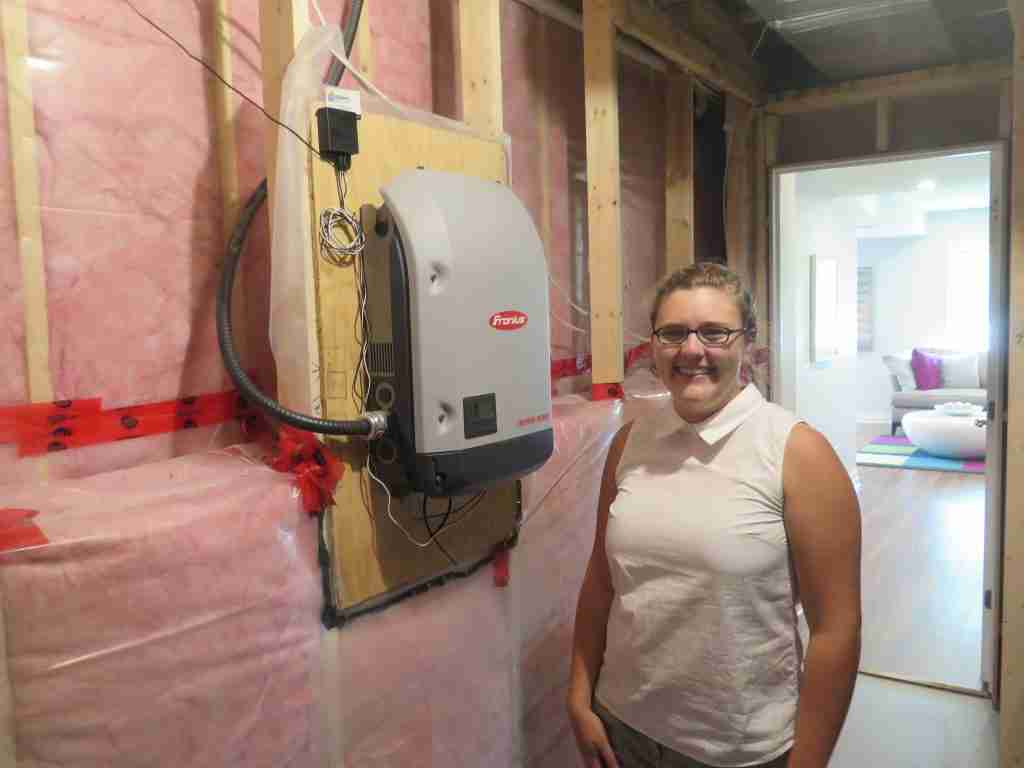 It all sounds wonderful but there have been, of course, lessons learned. “The biggest challenge is getting the air tightness to where it needs to be,” said Rebecca Hagen, a mechanical engineer and project manager with Minto Homes in Ottawa. She explains that one of Minto’s net-zero homes has four sets of patio doors, which has caused concern, but early actual energy numbers are matching the engineer’s modeling.

Four of the net-zero homes in Ottawa are townhome size. When planning for solar you need to convince the local power company that you need a 200-amp service. “This is easier for a detached house than the townhomes, but we eventually succeeded.”

Making a home solar ready can be complicated. “You need trusses that are sized for the weight of panels and snow that collects on them. To minimize solar gain we changed the rooflines from gables with four sides to two sides,” said Hagen. The mechanical room has to be designed to accommodate an inverter and the possibility of a future home battery. A conduit has to run from the mechanical room to the attic for the panels.

“These may sound like small things, but in the production house environment you have to consider how they affect costs and building schedules.”

Looking to the future

It sounds like production builders are getting serious. And they need to be. Building codes are changing dramatically.

“This house generates less than two tons of emissions compared to a typical house at 10 or 15 tons,” said Oding. He and a handful of colleagues were green builders years ago and have become building consultants with a passion for saving energy. “We’re almost giddy knowing what’s coming in the building codes,” he added.

Governments everywhere have been talking about net-zero for all new construction by 2030. That’s only 13 or 14 years away.

It’s different now. The technologies, priorities and costs are well known. Computer modeling is highly reliable. The HVAC system can be right-sized, and it’s going to be smaller. Are you ready?