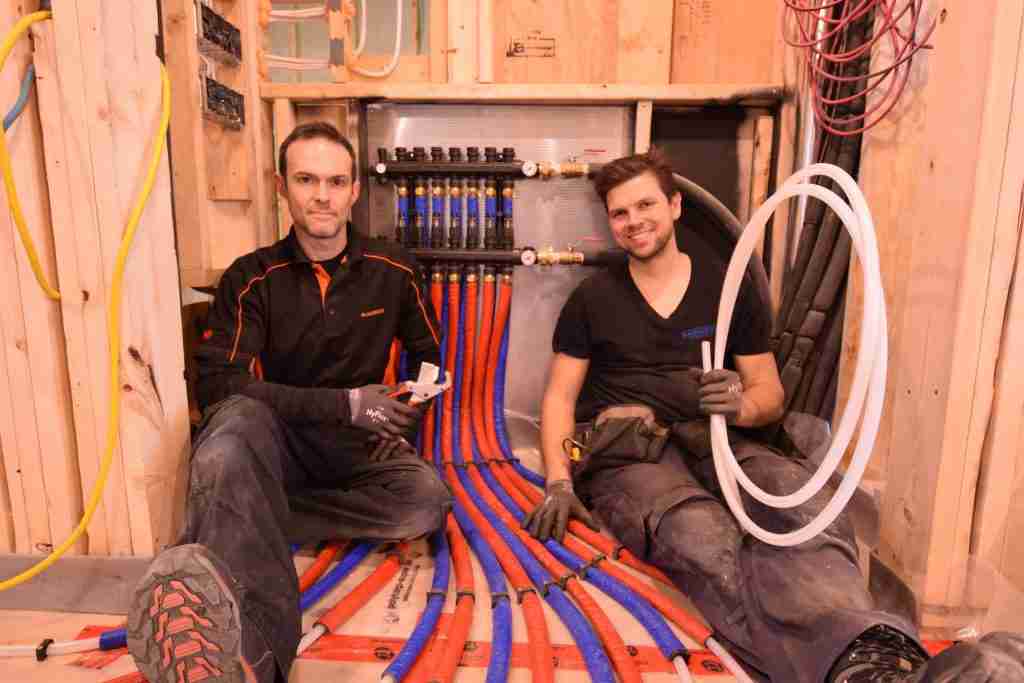 Among hydronic/plumbing and mechanical professionals, there are a few trade pros who make their craft into an art form. Tradesman and mechanical artist Orest Omeliukh draws inspiration from the European approach to mechanical system design, though with his own flair.

Across the big pond, hydronics are prolific, and mechanical components often see more human interaction than in North America. Components are sleek and clean looking, and installed within the occupied space instead of being relegated to mechanical rooms.

Omeliukh, who founded Blackrock HVAC Ltd. in 2014, was born in Ukraine, immigrating to Canada at the age of three. His father came to Canada to work on massive district energy systems.

“My dad has designed underground steam mains up to 16 feet in diameter,” said Omeliukh. “He came here, to Mississauga, Ont., with 20 other mechanics, engineers and pipefitters. Half of those men stayed and raised families.”

Complex and yet simple 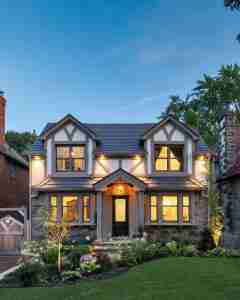 The older home was stripped to the studs and completely refurbished.

Recent trips back to Ukraine, Switzerland, Germany, and various other European countries left an indelible mark on Omeliukh’s style of work.

“The systems are complex in regard to what they accomplish, but they’re very simple for the service contractor and the homeowner. I only take on two custom home projects per year, and each is unique and aesthetically pleasing. But form follows function.”

In late 2017, Blackrock was approached by a custom builder, Gonell Homes, Etobicoke, Ont. (Toronto) for a full gut remodel of a home in one of Toronto’s older neighbourhoods. Omeliukh had done work for the general contractor before. The company’s owner, Will Gonell, hired Blackrock to design and install the comfort systems for his own home.

Gonell’s two-story, 3,000 square-foot home was stripped to the studs. The second floor was expanded to include a new master suite. Spray foam insulation and new windows were added throughout, and a domestic hot water recirculation line was insulated. Greatly reduced heat loss – check!

The concept that evolved between Gonell and Omeliukh was to use six zones of radiant in-floor for primary heat, and a seventh zone served by a hydronic air handler, which shares high-velocity ductwork with a heat pump. Domestic hot water is also provided by a sidearm tank. Snowmelt in the driveway also draws from the condensing boiler in the basement, meaning that Blackrock had to provide four different water temperatures.
“This job was unique in that it was an old home,” said Omeliukh. “I wanted to show off the mechanical equipment within the mechanical space and yet eliminate it from view elsewhere.” 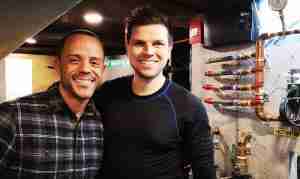 The two main players in this tale – Will Gonell, left with Omeliukh in Gonell’s mechanical room.

This air handler, along with the home’s Lifebreath HRV and an AprilAire 800 steam humidifier, is installed in a smaller mechanical space in the attic.

“The basement mechanical room is the showpiece here,” Omeliukh. “Everything was selected carefully for function, then assembled in a manner that catches the eye, and provides ample room and lighting for service work.”

Blackrock started with plywood walls covered in a very convincing poured concrete mural, giving the impression that each penetration was neatly core-drilled. In the past, he’s used murals portraying graffiti, art by Picasso, and a map of the Canadian Shield.

The 160 MBH IBC condensing boiler is piped primary-secondary. Omeliukh has calculated that the home’s heating load will only require 40 percent of the boiler’s capacity. When DHW or snowmelt calls, the boiler will fire at 100 percent for rapid recovery. The rest of the time, it coasts along at low-load, condensing as intended.
The primary loop is circulated by a Taco Comfort Solutions 0018e circulator with Bluetooth. An identical pump is used for the 80-gallon indirect tank. 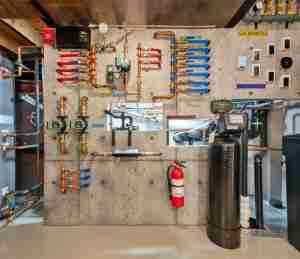 The secondary loop consists of the eight heating zones: six radiant, one for the hydronic coil and one for the master bathroom towel rack. These zones are pumped by a pair of Taco VT2218 circulators and use Zone Sentry valves for control.

From the radiant manifolds in the downstairs mechanical room and two remote manifolds hidden neatly in the house, half-inch PEX was installed on nine-inch centers. A thin overpour of Agilia lightweight concrete provides optimal thermal performance and floor rigidity.

The system was designed with a -21C (-6F) outdoor design temp and the boiler responds to actual conditions via outdoor reset for any heat call except DHW.

Omeliukh took steps to ensure that the homeowner or a service tech will find the system easy to operate and service.

Every zone features a label, 3D printed in the Blackrock studio, and each loop has a pair of isolation valves. One wall of the mechanical room features a black box, wrapped in carbon fibre and illuminated with LEDs. This was for aesthetic purposes – simply to hide wires and piping that would otherwise clutter the installation. The box also contains piping and wiring diagrams.

“I want the homeowner to be able to tweak the system or make adjustments in the event of an emergency,” explained Omeliukh. “And if a technician other than myself is going to work on it, I want to make their experience a good one.” 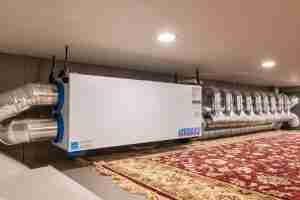 A second small mechanical room in the attic houses the HRV and steam humidifier.

When Omeliukh finishes a job, he goes home knowing that he’s done everything possible to deliver premium value. This means taking some unconventional steps.

Gonell wanted discrete HVAC: highly visible only in the mechanical area, and invisible elsewhere. So, no wall thermostats; instead, Blackrock installed flush mount tekmar 084 sensors throughout the home. The tiny sensors are installed in a small indent in the drywall, then mudded and painted over.

Wired to the tekmar 562 thermostats in the mechanical room, this approach allows occupants to manipulate temperature in any zone via an app, whether they’re sitting in the kitchen or at a tiki bar in Fiji.

The need for comfort paralleled Gonell’s desire for aesthetics. After installing radiant systems for years, Omeliukh’s recent visit to Germany reshaped the manner in which his company installs radiant tubing.

“If you look at an in-floor system through a thermal camera, you’ll find that loop ends are significantly cooler than the supply side. Most radiant installers use the “serpentine” method of laying tubing. Lately, we’ve been using the ‘counter-flow’ layout, which is common in Europe.”

This takes more planning and a little longer to install, but it alternates the warmest portions of a loop with the coolest across the floor, providing even heat distribution.

A tight building envelope, the latest condensing boiler technology and a full suite of ECM-powered circulators were just the starting point for efficiency.

The HRV is a whole-house system, connected to each of the home’s five-bathroom fans. This is required by the Ontario Building Code, but Blackrock took energy recovery an extra step. The unit is just an HRV chassis. During the summer, an ERV core is installed in the unit. Come heating season, the ERV core is swapped with an HRV core. This provides optimal energy transfer regardless of outdoor conditions.

The HRV, Unico air handler and the steam humidifier share an impressive, insulated mechanical space in the attic, technically making that room an occupied space. So, it needed to be conditioned during the winter.

“Boiler rooms are inherently warm,” said Omeliukh. “Too warm, for most of the winter. So we installed a central bathroom exhaust fan in the boiler room to move “free” warm air into the attic mechanical room. It’s energized by a thermostat when the temperature in the boiler room reaches 78°F and maintains a conditioned atmosphere in the attic.

Finally, Blackrock took several steps to ensure that domestic hot water is provided efficiently. DHW lines are insulated, and the Taco 006e3 circulator used for recirculation is plugged into a SmartPlug control.
Using a sensor that mounts to the hot water supply pipe, the SmartPlug “learns” the daily hot water usage pattern in a home and adjusts the circulator run time to deliver hot water when needed. When usage patterns change, the SmartPlug adjusts run times automatically.

Blackrock also installed a ThermoDrain DHW preheat system – a three-foot section of copper drain with an integral copper coil installed on the main plumbing stack. Supply to the water heater passes through the ThermoDrain, collecting waste heat from the stack as an occupant shower.

It’s pretty common to receive HVAC permit drawings that don’t reflect the structure or meet mechanical space requirements – especially on renovation projects,” said Omeliukh. “Because of that, communication between the designer, all the trades, and the equipment manufacturers was crucial on this project.”

“Gonell and I both wanted to use the best of the best components on this system. He gave me free rein to push my limits and incorporate everything I wanted to. From there, we just let all the elements fall into place.”