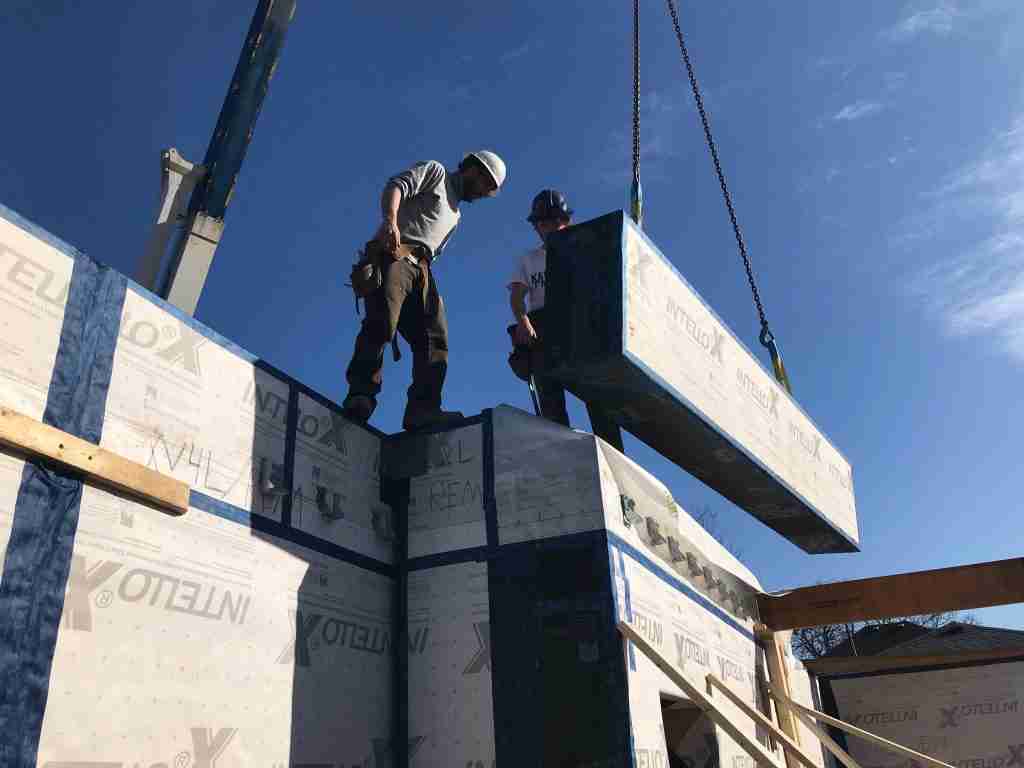 Quantum Passivhaus pre-fabricated the wall panels for this two-storey Saar home at its plant in Minden, Ont.

Another winter is upon us, bringing another hockey season and a chance for me to register a new low in my hockey pool point total. I should have changed my strategy this year. But change is hard. Our beloved Don Cherry just couldn’t change, and it led to his early retirement from Hockey Night in Canada.

Retirement, empty nests, cashing in; these are some of the reasons people are moving out of large valuable city properties and downsizing into smaller country houses. Joshua Fields Millburn, one of the authors of The Minimalist, a bestselling book on downsizing, says, “The easiest way to organize your stuff is to get rid of most of it.”

People in Ontario and Quebec seem to be opting for homes in the 1,000 – 2,000 square foot range. And this choice works well with simple, clean heating and cooling systems. 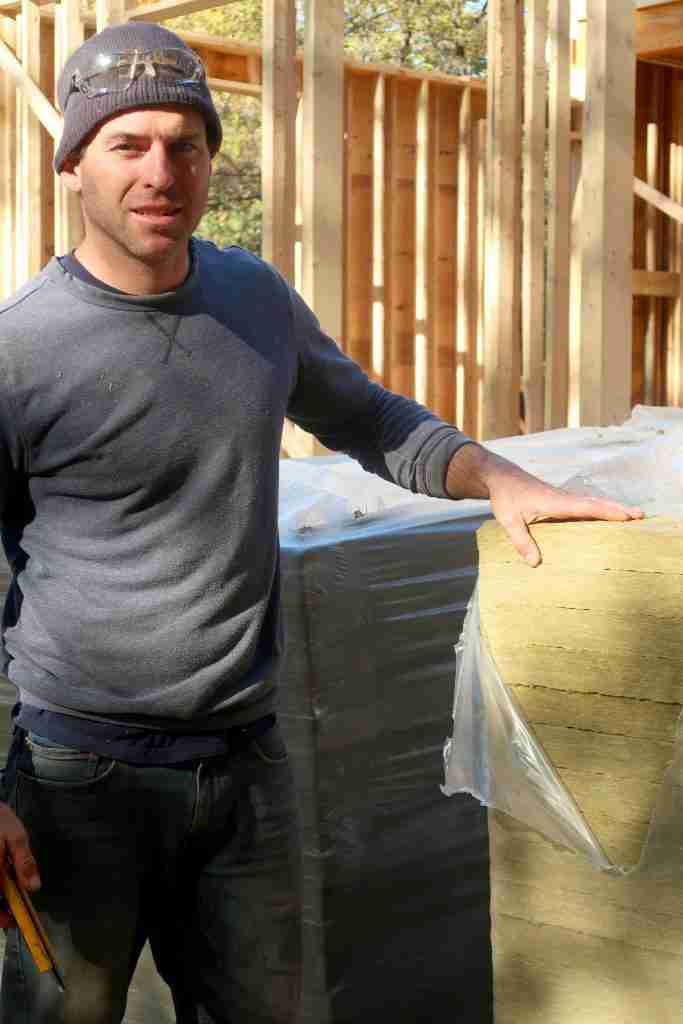 In Hudson, Que., Richard Price did a post-fire home rebuild with a modern building envelope and small mechanical equipment.

“Our neighbours were very impressed because 23 wall panels, (each about 16 inches thick) arrived in January and went up in two days,” said Koko, whose three sons have grown up, making their 4,500 square foot home in Mississauga, Ont. unnecessary. “We considered moving into a high-rise condo,” added Rob. “But I don’t like elevators and noise from neighbours. We wanted a bit of a back yard and I wanted the big garage.”  Their new garage is insulated but not conditioned.

“I like the Chiltrix unit because it comes with its own controls and also a small electric inline boiler for backup in extreme cold situations,” said Stuart Evans, mechanical engineer with Zon Engineering in Cambridge, Ont., which designed the system.

“Normally Chiltrix will supply the fan coil units directly. It does hydronic heating, and cooling without standby losses. It also does domestic hot water so there might be some standby losses in the small DHW tank, but that’s about it. 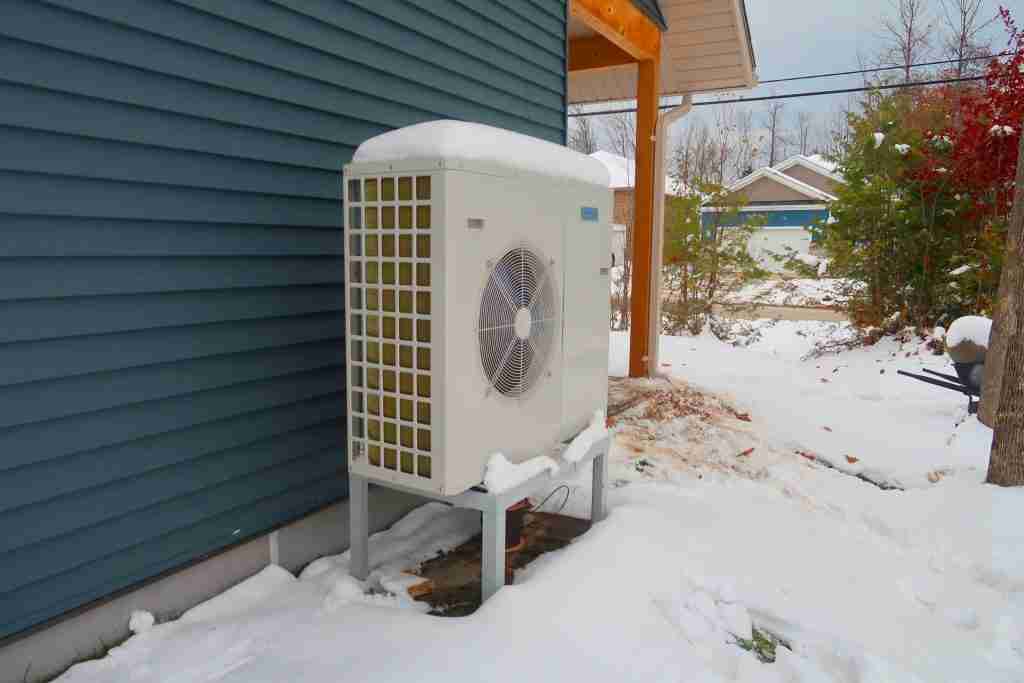 The Chiltrix outdoor unit at the Saar’s home.

“It’s a great system but it might not be for everyone because it’s relatively expensive. I’m not a fan of placing a heat pump in the middle of the house and hoping it will get to all the rooms, but it depends on the project. We have been doing some mini-split projects too and they’re very cost-effective.”

The Saars expect to spend about $150 per year on electricity, heating, cooling and domestic hot water heating. The Zehnder ComfoAir Q recovers about 90 percent of the heat energy from outgoing stale air with a Specific Fan Power (SFP) of 0.28 at 270 m3/h. “In this case, we opted for the pre-heat from Zehnder (HRV) and that makes everything much simpler.”

Simplicity. Facts. Statistics. That might help my hockey pool team. Get rid of some mental baggage, let go of old ideas about past glory.

Richard Price selected the new PentaCare V12 combo unit from Minotair for heating and cooling. It’s described as an air source heat pump that does dehumidification, high-efficiency air filtration through a HEPA MERV 15 filter, and compressor-based heat recovery ventilation that can achieve net-zero performance in some conditions. 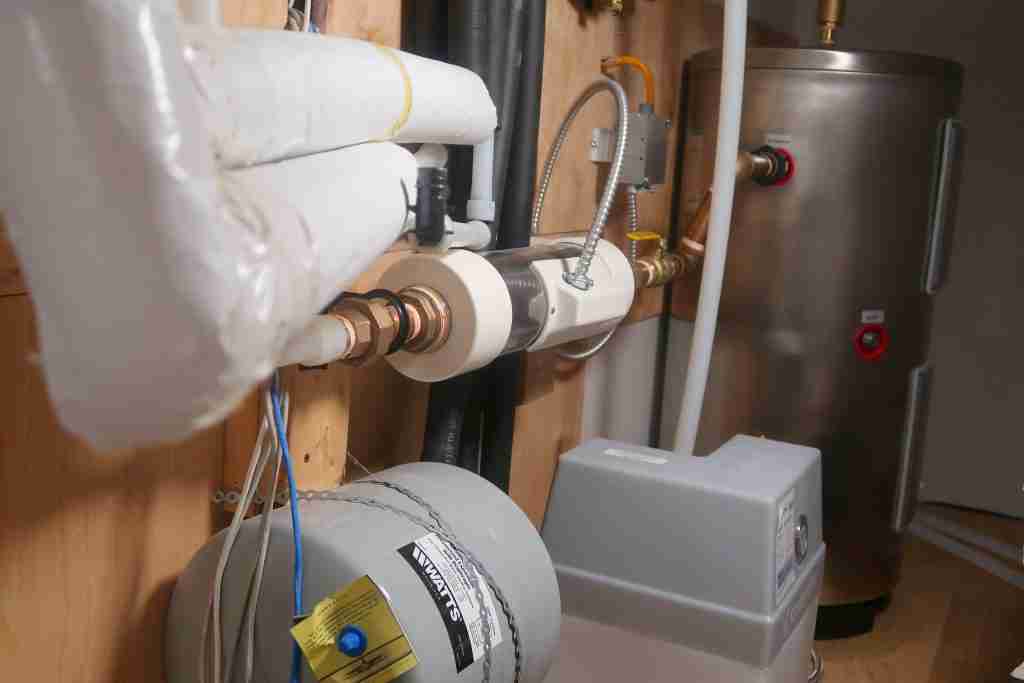 The mechanical room at the Saar’s home includes a small inline electric boiler for backup heat.

Another plus from Price’s point of view is that it connects to standard ductwork rather than requiring the custom Zehnder ductwork. “It’s easier to find a sub-trade who is comfortable doing the ductwork with this unit.”

Price is a building contractor working on a rebuild in Hudson, Quebec. It started as a renovation following a house fire, but the more they dug it out, the more they realized that they were nearly starting from scratch.

“When we took up the floor, we found that the slab was in pretty bad shape too because it was built back in the 50s when a lot of things were done on the cheap.”

“This is the modern way to build and it doesn’t cost any more than the conventional way,” says Richard. “The windows and the ventilation equipment are expensive but doing the insulation and the sealing properly has a strong payback on energy savings.

“It all balances out. The surfaces are plus or minus 10 degrees, there’s no stratification. It’s cozy in the winter and provides a high level of sound-proofing. It’s a very durable system that could last 100 years. We should have been investing this way before now, in my opinion.” 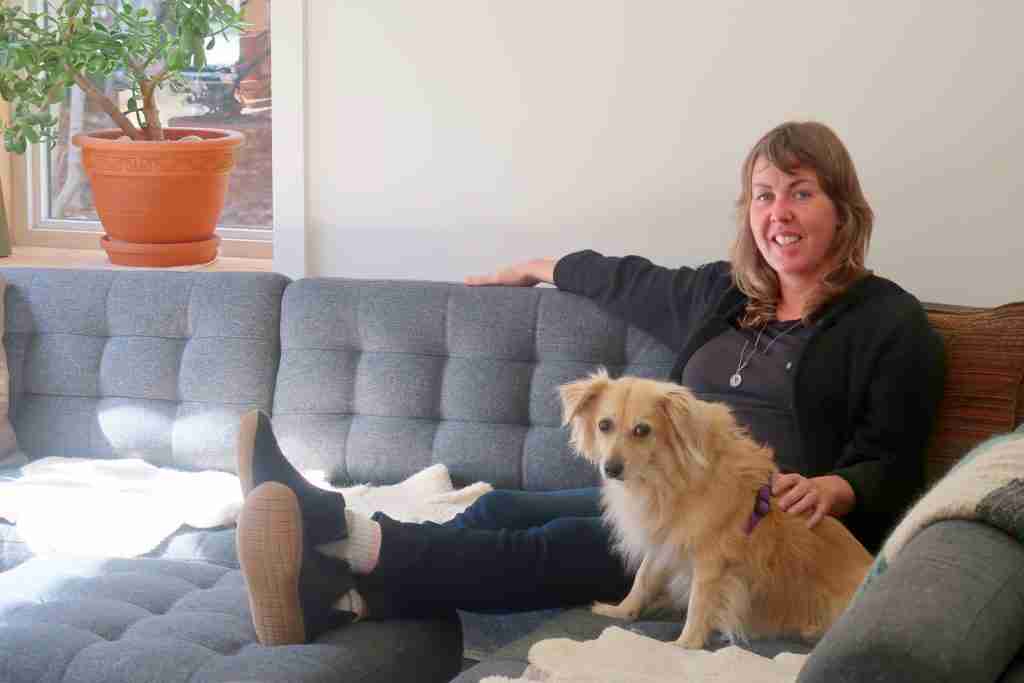 Elly Green’s father bought the vacant forested lot next door to the family’s country home near Eugenia, Ontario, many years ago. He has since passed on, but Elly’s mom still lives on the property. Now an adult who loves the outdoors, Elly decided to build her own home on the extra lot, but she wanted something modest in size. She opted for an open concept kitchen/great room plus one bedroom.

The whole building is about 1000 square feet, with thick, passive-house-style walls. “It’s not (Passivhaus) certified, but it probably could be. I didn’t do it so I could be in the club. I just needed an affordable place to live, where I could take my dog out for a run.”

“It’s a nice small project with a mini-split (LG) and some backup (Stelpro) baseboard heaters,” says contractor Ben Polley of Evolve Builders Group in Guelph, Ontario. “I was looking for off-the-shelf components, so instead of the Zehnder which is an import, we chose the vanEE. We also found triple pane windows from a Nova Scotia company called Kohltech.”

The most important part of small houses like Elly’s is the building envelope. We’ve come up with methods and materials to increase airtightness and eliminate thermal bridges.”

All three of the homes in this article were designed with larger windows on the south sides for more solar gain in the winter, and with window shades for reducing gain in the summer. They have Energy Star appliances and LED lighting.

“I’m the new wave of clients that are coming. We’re younger and we’re going to build in this way,” says Green.

“I have two kids and the climate crisis is a huge concern for me,” added Price “I’m looking for clients like this one and proud of building homes without fossil fuels.”

“If you’re an HVAC provider for single-family homes and you don’t have a keen understanding of the air source market, you’re going to be left out,” remarked Polley. “It’s the thin edge of the wedge right now. It’s a new world.”

Hmm. My old hockey pool strategy a fully-verified failure, carbon price firmly in place, the Don Cherry-era is over, it might be time to change something…