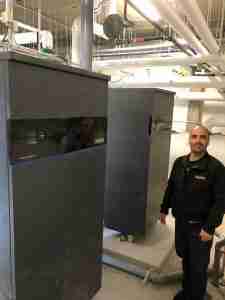 Engineer Dave Muncaster, owner of Nu-Mun Contracting, Calgary, recently completed a high efficiency Weil-McLain boiler retrofit at The Cube, a 52,000 sq. ft. seven-storey office building that has been converted into a multi-unit residential.

Under Amendment 15 to Canada’s Energy Efficiency Regulations, all boilers must be 90 percent efficient – by Jan. 1, 2023 for residential units and Jan. 1, 2025 for commercial boilers.

While there is a wide selection of condensing equipment available, in retrofit applications venting may be a challenge and replacing one boiler in a multi-boiler system may prove difficult.

The boiler industry lobbied Natural Resources Canada (NRCan) hard for an exception for older systems that could not easily be upgraded – a compromise that was made for commercial water heaters. “They said, ‘we don’t care about that.’ They look at the number of units being sold… Seventy-eight percent of the market has already shifted to high efficiency,” remarked John Goshulak, P.Eng., vice-president, sales and marketing, Weil McLain Canada, Burlington, Ont.

“There is 20 percent of the market that is not buying high efficiency,” added Goshulak. “Why? From the surveys we did, it’s because it won’t work – it won’t fit, there’s no benefit, the customer can’t afford it.”

“It’s going to be very challenging,” said Robert Waters, technical director for the Canadian Institute of Plumbing & Heating. “There are going to be existing buildings, like apartment and multi-family buildings – that have non-condensing appliances. They are now going to have to switch to condensing and you could be looking at some pretty extreme re-venting costs.

“Anything is possible if you throw enough money at it,” remarked Tom Gervais, P.Eng. director of specification and product development, Bradford White Canada, Halton Hills, Ont. But, he added: “If you’ve got a tall building, anything over 10 or 12 storeys, and you’re going to be venting the boiler vertically, you are going to be over the 100 equivalent feet and therefore you may have to go to a power vent solution, That equipment exists, it works… the downside is it’s expensive, and potentially very expensive. And it’s a whole other (mechanical system).”

There are other hurdles depending on the jurisdiction. Vancouver, for example, has significant restrictions on sidewall venting. “Sometimes (the contractor) can’t vent here because it’s too close to the property line, but they can’t vent there because the vent run would exceed that allowed by the certification of the equipment,” noted Gervais. 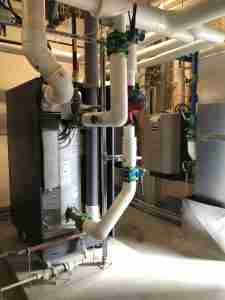 Another view of the mechanical room at The Cube.

“This is one area where they have really jumped ahead of the U.S. In most other products, they have harmonized (standards) with the U.S.,” added Waters.

From the very beginning of the Amendment 15 process, the industry has voiced serious concerns.

On the water heater side, “they made most of the changes we suggested, with a few exceptions,” said Waters. For example, in commercial gas-fired storage tank DHW heaters, CIPH had asked NRCan to change the standby loss requirement to match the Energy Star requirement in the U.S. at 0.84 for new installations, which they did. NRCan also accepted a request to reduce minimum efficiency requirements to 80 percent for retrofits, matching the U.S. Dept. of Energy (DOE) requirements. The proposed date of Jan. 1, 2020 was pushed back to Jan.1, 2023.

The industry sought a similar compromise for boilers, both oil and gas, for many of the same reasons. “They didn’t listen to anything that our industry had objected to,” noted Waters. “We had asked that they do the same thing with boilers that they did with residential gas water heaters – that they have separate categories for new construction and retrofit, but they just went all condensing,” he added.

There were no changes to electric and gas storage tank efficiency regulations in Amendment 15, except that the rating system has changed from energy factor (EF) to uniform energy factor (UEF).

The UEF system was introduced by the U.S. Department of Energy (DOE) to remove inconsistencies in performance ratings and help contractors and homeowners make better “apples to apples” comparisons when looking at energy efficiency.

Waters expects to see higher efficiencies required for residential DHW tanks in the next couple of years in either Amendment 16 or 17, which NRCan is now working on. “(NRCan) wants to get to all condensing for all units, but the residential non-condensing water heater market is huge, so that’s a pretty big step and would put them out of step with the U.S. market.”

And while the major concern with Amendment 15 has been on the commercial retrofit side, it applies to residential too, added Goshulak. “You’re on a pension, you’ve had your boiler for 30 years, and suddenly your service guy tells you that you need a new boiler, so you say, go ahead and change the boiler. And then they tell you that: ‘We can’t just change the boiler: we need to put in a whole new system that you’re not going to benefit from. It’s not going to be more efficient and, at the end of the day, it’s going to cost you 30 to 50 percent more than just putting in a conventional boiler.”

Goshulak believes moving the dates back by two years was “an olive branch” from NRCan but adds the industry would have been ready in 2021 for residential and 2023 for commercial had NRCan allowed replacing like for like where upgrading to condensing technology wasn’t possible. 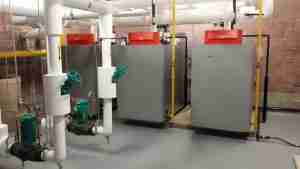 High efficiency all the way in this Viessmann installation. Manufacturers are ready to help with difficult projects.

“I think the other consideration, for those drafting the legislation, is that some building owners will just throw in the towel in and go with electric (heat pumps),” said Gervais. “Depending on the province you’re in and the electricity prices, I don’t think that’s going to be viable all the time, but I can certainly envision that by 2025, it may be more popular.”

In a webinar meeting between manufacturers and NRCan this spring, there was a suggestion that a task force be created to examine extenuating circumstances, when “the venting is just not a possibility.”  That offers some hope, said Goshulak, but he doesn’t believe that NRCan understands how many retrofit installations will be impacted.

If a condensing boiler must be added to a multi-boiler system made up of non-condensing boilers, manufacturers can and will help. Mark Norris, Viessmann Academy instructor, Waterloo, Ont., suggests the following: