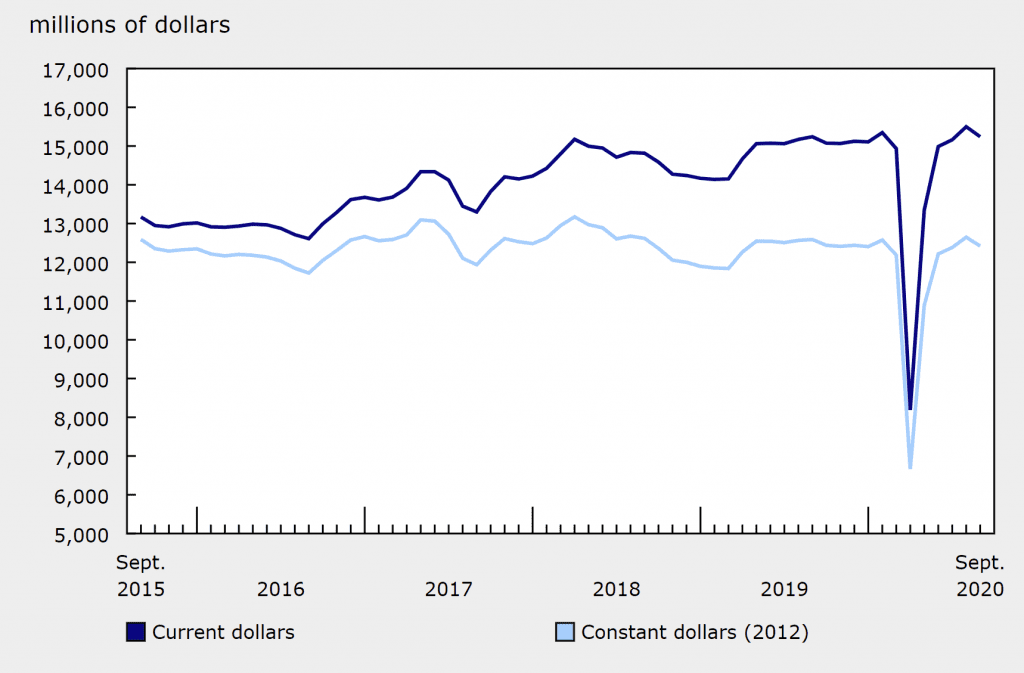 Ottawa, ON—September proved to be a complicated month for the construction industry in Canada. Total investment decreased 1.7 per cent to $15.2 billion after reaching a record high in August. Six provinces reported declines with the largest in Quebec and Ontario, according to Statistics Canada.

The non-residential industry dropped by 8.5 per cent to $4.5 billion, which is the third consecutive monthly decline after peaking in June 2020. The sector peaked back in June 2020. For the commercial, industrial and institutional components of the non-residential building construction industry all fell to the lowest levels seen since April 2020. Ontario and Quebec account for the majority of the provincial declines in all three components.

In commercial building construction investment, Newfoundland and Labrador was the only province to report an increase in September. Overall, the sector was down 11.3 per cent to $2.6 billion.

Investment in industrial building construction fell 5.6 per cent with every province reporting decreases. Quebec reported the largest decline but remained above pre-COVID-19 levels.

Nationally, the institutional component declines 3.7 per cent despite gains in five provinces.

Overall, investment in residential construction was up by 1.6 per cent, led by multi-unit investments. This was the fifth consecutive month that multi-unit construction reported gains. Manitoba and Quebec led the advance with both new construction and renovation projects on apartment buildings. The largest declines were reported in British Columbia—continuing a downward trend following the peak reached in May 2019.

Single-unit investment was largely unchanged in September after four consecutive monthly increases from May through August. Declines reported in five provinces were mostly offset by gains in Newfoundland and Labrador (up 8.5 per cent), New Brunswick (up 5.8 per cent), British Columbia (up 1.8 per cent), and Ontario (up 0.2 per cent).

In the third quarter, investment in building construction saw a strong growth of 25.7 per cent—bouncing back from a substantial decline in the second quarters, impacted by COVID-19 related shutdowns.

All components in the residential and non-residential sectors showed growth compared with the previous quarter. While investment in both single- and multi-unit construction rebounded, multi-unit investment reached a record high on a quarterly basis. It has been surpassing single-unit investment since the first quarter of 2020.

The commercial and industrial components of non-residential investment have not returned to pre-COVID-19 levels on a quarterly basis. However, the institutional component has surpassed pre-COVID-19 levels. Provincially, Ontario and Quebec accounted for more than three-quarters of the gain.