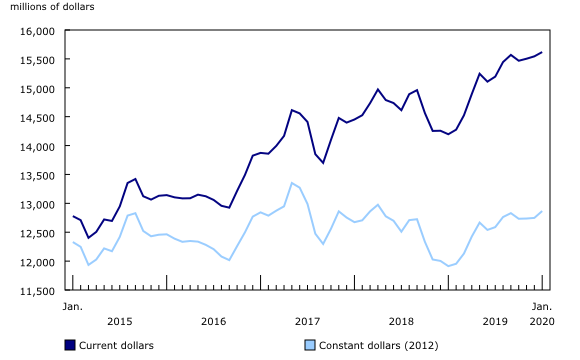 Investment in building construction increased slightly in January by 0.5 per cent up to $15.6 billion. On a constant dollar basis, investment was up 0.9 per cent to $12.9 billion compared with December 2019.

All three components of non-residential investment were up in January, rising 1.4 per cent to $5.1 billion. Both Quebec and Ontario reported notable growth, while Alberta declined 1.5 per cent to $682.1 million.

The commercial component was the largest contributor to non-residential growth – up 1.8 per cent to $3 billion. Quebec reported the largest gains, primarily due to major projects – such as the National Bank head office in Montreal.

The institutional sector rose 0.9 per cent to $1.2 billion. Toronto helped propel Ontario up 2.8 per cent to $423.8 million. Declines in B.C. and Alberta slightly offset gains in Ontario.