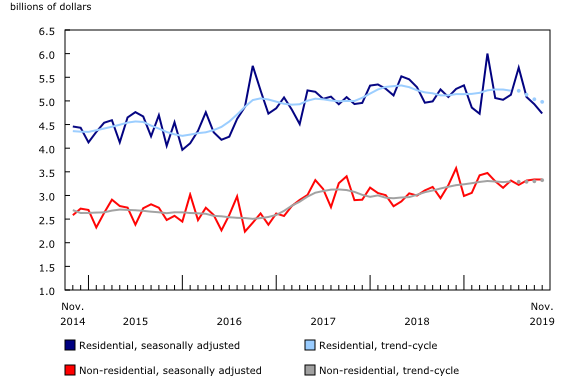 Value of building permits for the residential and non-residential sectors.

Fewer building permits were issued in November than the previous month with a reported decline of 2.4 per cent to $8.1 billion in construction intentions across Canada.

However, Quebec was up significantly with a total increase of 10.3 per cent to $1.9 billion. On the other hand, building permits in Ontario dropped 5.7 per cent to $3.2 billion. Ontario was one of six provinces to report declines.

Non-residential permits were largely unchanged in November. However, the value of industrial permits did rise 24.5 per cent to $753 million. The majority of the gain was due to a high value permit for an organic waste management facility in Quebec City. Meanwhile, the value of institutional permits rose 14.5 per cent to $894 million – largely due to gains in Quebec, resulting from building intentions for healthcare and education facilities. A decline in commercial permits offset those gains.

In Nunavut, the total value of permits issued jumped from $500,000 in October to $16 million in November. The increase was largely due to a mixed-use residential and commercial project in Iqaluit. This was the largest increase in the value of residential permits in Nunavut since Dec. 2018.