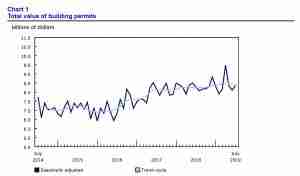 There was a rise in the value of building permits issued by Canadian municipalities by three per cent to a total of $8.3 billion for July. This was largely due to increases in multi-family and commercial permits.

Five provinces saw increases, with over one-third of the national increase just in British Columbia. Quebec reported the largest decrease of 4 per cent to $1.6 billion due to lower construction intentions in all components of the non-residential sector.

Multi-family permits reported an increase in seven provinces, increasing 4.2 per cent to $2.8 billion in July. Ontario and Quebec led the charge after both provinces reported declines the previous month.

The value of permits for single-family dwellings nationally edged down 0.2 per cent. The largest gain was in commercial permits, which rose 6.7 percent to $2 billion. This

offsets three consecutive months of decline. The increase was largely attributed to high-value permits for office buildings in the census metropolitan area of Vancouver.

The industrial industry didn’t have as good of a month having reported declines by 6.9 per cent in six provinces. 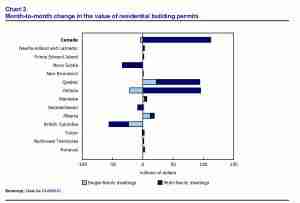 Month-to-month change in the value of residential building permits.

Ontario issued a record-high $3.5 billion in permits in July. This is the fifth consecutive monthly gain, moving the province $209 million or 6.3 per cent higher than the same month a year earlier. Manitoba and New Brunswick also reported strong year-over-year gains.