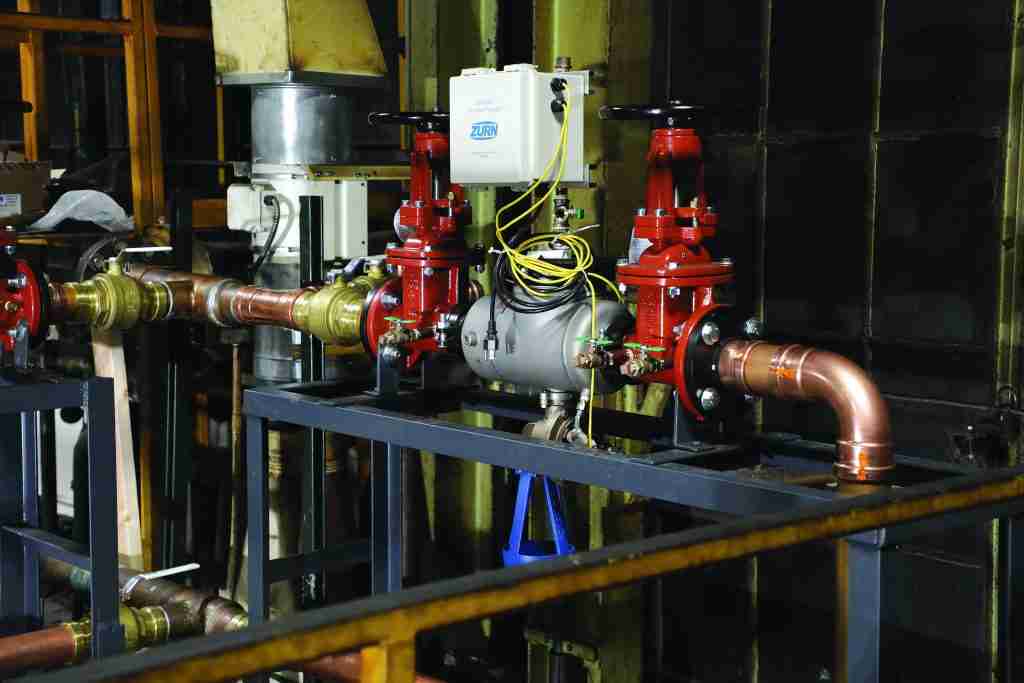 The contractor that can do both the plumbing and electronic connections will gain a competitive advantage.

The adoption of “connected” devices for backflow prevention has been relatively slow, but there is one major issue driving it. Where an engineer has no option but to locate the backflow preventer inside a large building where the result of a full discharge could cause catastrophic damage, having it connected to a water shutoff and providing an alert to building maintenance personnel is a significant safeguard.

“If there are assets within that building that need to be protected or cannot be compromised – data centers for example – then this connected technology specifically for backflow prevention regarding RPZs where there is a leak or flooding event – that’s where we primarily saw the application (of connected technology),” remarked Hans Ohren, backflow prevention product manager for Apollo Valve, Matthews, North Carolina.

Just about every manufacturer today either offers a connected product or is developing one.

“Plumbing is kind of like the last frontier to be tied into building management systems (BMS), remarked John Mankins, product manager, water control and safety, for Zurn, Paso Robles, Calif., which offers numerous connected options for backflow and flood prevention.

“I think the reason that backflow has moved a little more slowly into the connected space than some other products is because of the strict regulatory environment around it,” he added.

Apollo Valve doesn’t currently offer connected backflow products, noted Ohren. “We have been looking at them and considering them for our next stage of development.”

Zurn’s latest connected technology builds on the company’s SDS technology, which tied the backflow preventer to an electronic solenoid timer (EST). “It would send a signal to that EST box, which would set a time delay and, once it hit that time delay, it would send out a signal to an automatic control valve to shut off the water,” said Mankins.

From there, the company developed a standalone connected product by adding a position indicator on the relief valve and a pressure sensor in the backflow zone so that the controller could see how much the relief valve opened and could measure the pressure in the zone. “With those two measurements, we could calculate how much flow was going out of the relief valve.”

Flood prevention is a primary role of connected backflow devices.

That is then tied into Zurn’s plumbSMART portal, which connects, monitors and records information from the electronic devices.

The building operator can set up parameters in the plumbSMART portal and they will receive alerts based on those parameters, added Tauseef Ali, product manager, Zurn Canada, Brampton, Ont. “As time goes by, you can tweak or sharpen the parameters to give you the exact notification you need when you need it. Each individual team member would get their own personalized events.”

Connections can be wireless or ethernet. It can also be connected with an LT cable where there are security concerns and the building operator does not want it tied into the internet. Zurn is adding pressure sensors to all its backflow preventers for pipe sizes 2-1/2-inch and higher.

As mentioned, Watts’ focus with its SentryPlus Alert connected technology has been on flood prevention. “Mechanical room drains are rarely sized appropriately to handle catastrophic discharges from these devices,” remarked Rapoport. 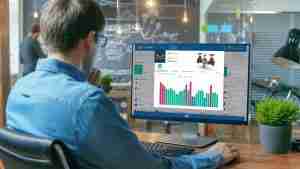 Building maintenance and other designated personnel can see at a glance the status of all their connected plumbing devices.

The SentryPlus Alert system provides continuous monitoring and detects catastrophic discharge from the relief valve of RP backflow preventers. When it detects an incident, it issues a multi-channel (call, text, or email) alert. “We found that customers don’t always want a new device connecting to their Wi-Fi, so having a cellular connection, along with an option to connect directly to a BMS, is very important.” It can also be paired with an automatic water shutoff.

Where the water must not be shut off, such as in hospitals, the usual solution is to install parallel backflow devices so that where one has an issue the flow is diverted to the other.

Apollo surveyed key stakeholders – specifying engineers, contractors and wholesalers, reported Ohren.  They told Apollo, “it needs to be hard-wired to a building management system to be failsafe. Wireless technology is good, but one of the requirements that was communicated to us was that it needed to be hardwired to the building management system in case the power went down or the Wi-Fi went down.”

Mechanical contractors are well versed in installing backflow preventers. The connected products involve a few extra details to ensure the unit gives the building operator the information they need.

And that’s been a bit of a struggle, remarked Mankins. On a recent demonstration project where a contractor was asked to install three connected backflow preventers, “what we found was they installed the backflow as normal and then walked away, leaving the connected stuff in the crate.”

But these units are largely plug and play; designed to be installed and set up by a plumber. “At the very least, the connected pieces need to be handed over to the next guy in line to finish the setup and make the connection to the user interface.

On the Zurn unit, the plumber simply plugs in the endpoint and the gateway device and then the unit is set up on the Zurn’s PlumbSmart portal. “It’s a pretty simple procedure. You have to register and log in and create an account. As soon as you plug in the gateway and the connected RP, they start talking to each other automatically,” said Mankins.

The connected backflow preventer communicates through a gateway.

“I think that the (trades) that learn how to finish the setup and adopt (the technology), not just the plumbing portion of putting in the backflow, but also the setup and the handing it over to the owner, are going to be set up more strategically to win business in the future.”

The whole idea of connected systems is evolving, noted Mankins. “Where does the role of the installing contractor end and the system is handed over to building maintenance?” It’s not always clear, but for a successful installation everyone involved needs to be up to speed and working together.

Connected technology has significant benefits for maintenance. The ability to look at a computer screen and see all the devices in the system, how they are connected and which, if any, are having issues will make life much easier maintenance personnel, allowing them to fix things before they become a problem. “I think we’re going to get more predictive in the maintenance,” said Mankins. 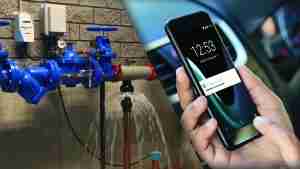 If a discharge occurs, the connected backflow device will send an immediate alert to a designated person and can trigger an automatic water shutoff valve.

“We are not just connecting backflow valves; we are connecting sensor flush valves, sensor faucets and a lot of different things through the building,” he added. “We are starting to think through having those different pieces talk to each other. What can you learn differently when you know that your backflow device is flowing and you know that flow is going to sensor faucet number three? We think that there might be some really good insights over time that are developed just out of monitoring that whole connected system.”

“The ability to see what is going on with your system without having to be standing next to it is becoming more and more important, so providing alerts to customers when they’re not in the mechanical room, or even in the building, is a huge value add,” said Aaron Insel, Watts channel marketing manager.

“Because they are a safety device, with connected technology I think we can increase the monitoring of our backflow devices and increase the safety of our plumbing systems,” added Rapoport.

While connected technology may be the big news, there have been numerous other advances in backflow protection devices in recent years.

When space for mechanical equipment is at a premium in any new building, backflow preventers have become shorter and lighter. “A valve that used to be four feet long and weigh 600 lbs. is now 1-1/2 feet long and 70 lbs.,” noted Rapoport. That makes the installation much easier too.

There are new materials. “Things like engineered plastics and stainless steel are replacing bronze and iron parts, especially in the larger sizes,” said Rapoport.

They’ve become easier to repair thanks to easier access to the internal parts. Modern units may have one or two bolt couplings and larger openings where both checks can be accessed. Rubber parts are often reversible. On many, the check assembly will pop right out for inspection and cleaning.

Apollo has eased the testing procedure by putting the test cocks on top on its 4A product, regardless of how the unit is installed.