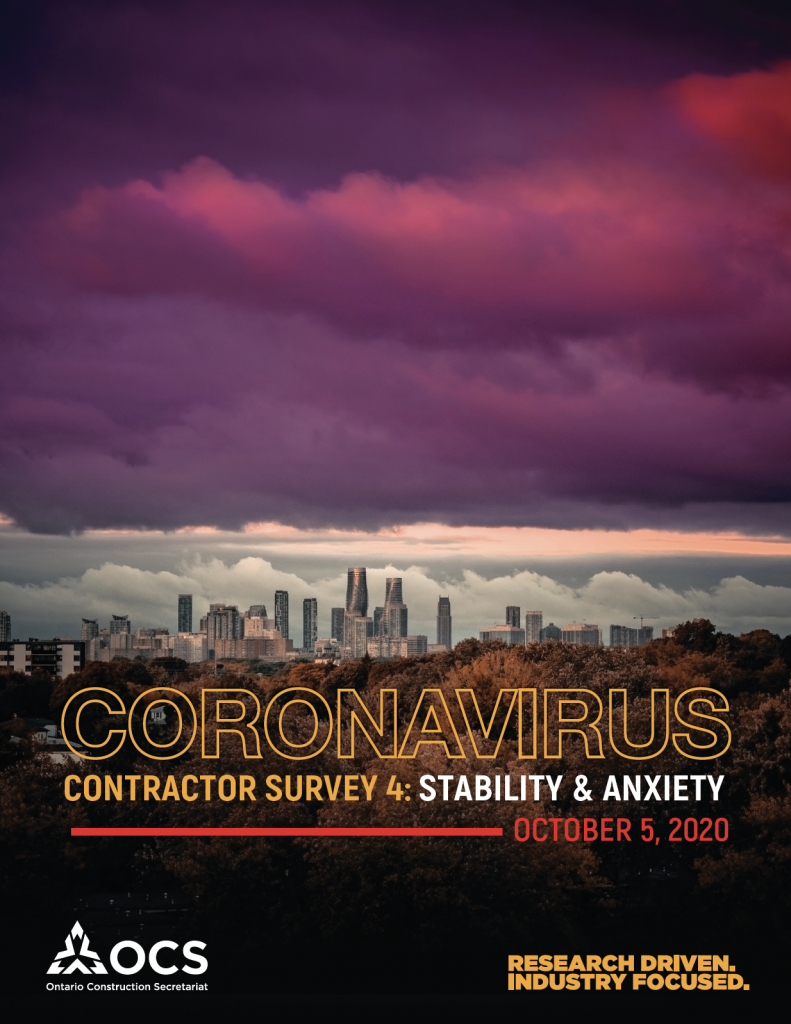 Toronto, ON — Ontario contractors are showing signs of stability, but are still anxious about a second wave of COVID-19, reports the Ontario Construction Secretariat (OCS), in its just-released fourth industry survey.

The Coronavirus Contractor Survey 4: Stability and Anxiety found that the threat of a second wave of COVID-19 is the biggest concern of contractors. There has been little change over top concerns from previous surveys including supply chain disruptions, skilled labour availability, and ensuring the health and safety of workers and staff. There has, however; been a significant decline in concern regarding project cost over-run due to sanitization, safety, and social distancing protocols.

The financial impacts of the pandemic remain significant to the industry as 54 per cent of contractors said their business was growing before the pandemic and now only 13 per cent report growth. Pre pandemic, merely 3 per cent said their business was in decline whereas 33 per cent report a current drop. A sizeable 66 per cent of firms expect less revenue in 2020 compared to 2019, which is an improvement from earlier surveys where close to three-quarters of contractors anticipated lower revenues. The magnitude of revenue loss also continues to improve with contractors now expecting an average of 16 per cent decline.

Supply chain disruptions have not improved since the pandemic began in March, with 64 per cent reporting high or medium impacts on business. Building permit processing has been reported lower than pre-pandemic by 52 per cent of contractors, and 46 per cent had difficulty getting skilled labour.

Between September 8 and 18, 2020, the OCS led a Contractor’s Survey of 300 ICI (Industrial, Commercial, and Institutional) contractors from across Ontario.

Approximately 37 per cent of contractors expect it to be more difficult to obtain skilled labour compared to September—December 2019, while 10 per cent expected it to be less difficult.