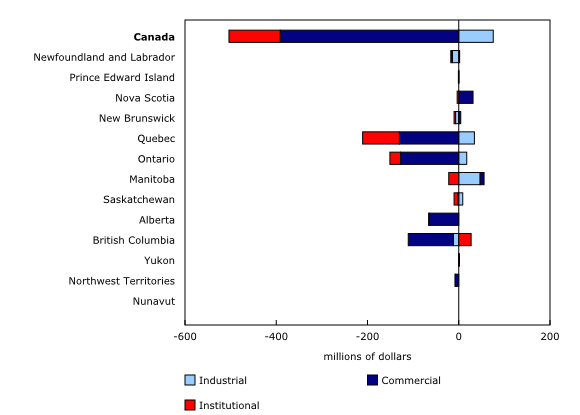 Month-to-month change in the value of non-residential building permits, millions of dollars

March proved to be a poor month for the total value of permits issued by Canadian municipalities. It decreased by 13.1 per cent to $7.4 billion compared to the previous month, with declines reported in seven provinces and two territories.

The total $1.1 billion national decrease was the largest since August 2014. This reflected notable drops in Ontario (down 12.9 per cent), Quebec (down 18.1 per cent), and British Columbia (down 19.4 per cent). This coincides with efforts to slow the spread of COVID-19.

The total value of residential permits decreased 13.1 per cent to $4.6 billion in March. Value of permits issued for single-family dwellings fell 15.3 per cent to $2.2 billion, with the largest percentage declines observed in Prince Edward Island and Quebec. The province of Quebec shut down all non-essential business activities, including construction, on March 24.

The only gains posted in March were in New Brunswick (up 2.3 per cent) and the Northwest Territories (up three per cent).

Multi-family dwellings construction intentions dropped 11.1 per cent to $2.5 billion, with the largest declines seen in Ontario (down 13 per cent to $1.1 billion) and British Columbia (down 24.4 per cent to $389 million).

Seven provinces reported declines in the value of commercial permits issued, bringing the national total down 19.7 per cent to $1.6 billion. The largest decline in commercial permits was in Quebec, which recorded its third consecutive monthly decrease.

The value of institutional permits was down in eight provinces, with Quebec (down 37 per cent) posting the largest decline.

Industrial permits were the only component to show an increase at the national level in March. This was driven by strong gains in Manitoba (up 185.9 per cent), reflecting several large projects in the Winnipeg area.

In the first quarter of 2020, the value of building permits declined one per cent compared with the fourth quarter of 2019. This was the third consecutive quarter-to-quarter decline, yet the value of permits remained 2.1 per cent higher than in the same period a year earlier.

The first quarter started with gains in the value of permits in January that were mainly due to British Columbia, where an increase in development fees in Vancouver likely pulled some permits forward as builders submitted their applications before the January 15 deadline.

After returning to more normal levels nationally in February, construction intentions dropped in much of Canada as governments and businesses implemented measures to slow the spread of COVID-19 in mid-to-late March.

Six provinces reported losses in the first quarter, with the most notable decrease in Quebec. However, quarterly increases in British Columbia and Ontario offset much of the decline in Quebec. Residential permits issued in the first quarter were valued at $15.8 billion, representing a 5.8 per cent increase compared with the previous quarter, mainly driven by permits issued for multi-family dwellings.

The value of non-residential permits was down 10.7 per cent to $9.4 billion. Declines in institutional, commercial, and industrial permits all pushed down the national total.