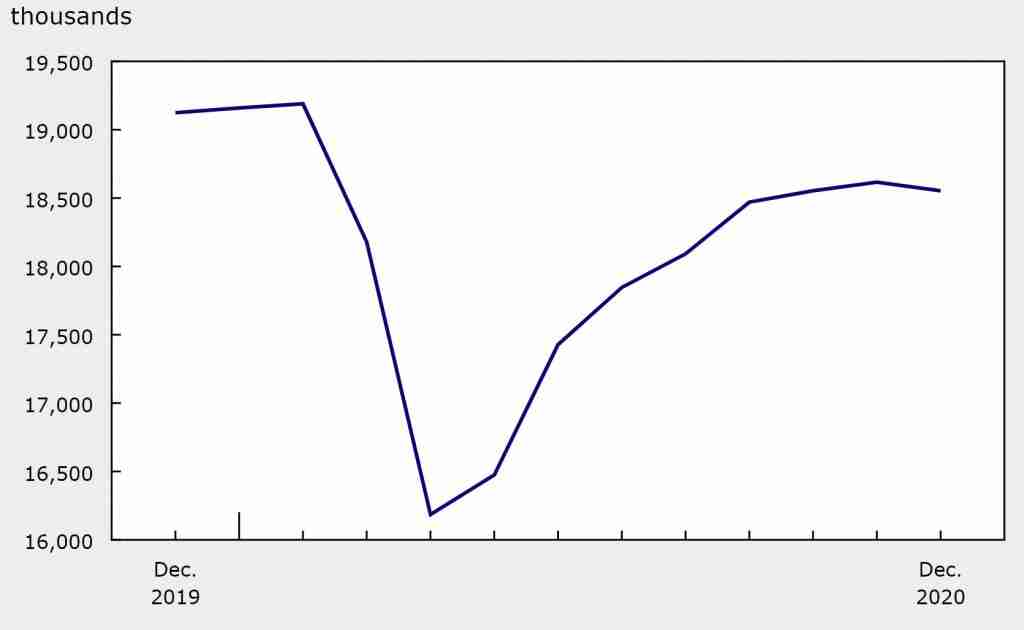 Employment declines for the first time since April 2020.

Ottawa, ON—Employments levels took another dip in December 2020, following the reintroduction of various levels of restrictions across Canada. This fall was the first time since April and fell by 63,000 (or down 0.3 per cent).

By December, 1.1 million Canadian workers were affected by the COVID-19 economic shutdown, reports Statistics Canada—this could be in the form of lost employment or reduced hours—compared with 5.5 million in April.

On a year-over-year basis, self-employment was down by 192,000, with the largest declines reported in the construction, transportation and warehousing, and health care and social assistance sectors. Most of the decline was with core-aged workers, mostly men. Decreases were observed among the incorporated self-employed—including those with and without paid employees—as well as those who are unincorporated but have employees.

Overall, employment declines were most notable in construction, information, culture and recreation, and accommodation and food services. More people were employed in business, building and other support services.

Employment in British Columbia was little changed, with gain reported in full-time employment were offset by losses in part-time work, while the unemployment rate was 7.2 per cent. The largest employment losses in the month were in accommodation and food services, while the largest gains were in construction.

As more provinces adapted their public health measures to slow the spread of COVID-19, total hours worked declined for the first time since April, falling 0.3 per cent.

After the amount of cases increased in the fall, the share of Canadian working from home trended up, reaching 28.6 per cent.

The unemployment rate was 8.6 per cent , essentially unchanged from 8.5 per cent in November.

Although manufacturing employment increased employment in the goods-producing sector as a whole was little changed.

Only in Newfoundland and Labrador did employment level match the pre-COVID February level. Furthest below the February level in Alberta and Manitoba.

Youth employment fell further from pre-COVID levels, with levels amongst youth aged 15 to 24 fell by 1.1. per cent.

After two months of little change, manufacturing employment rose by 15,000, driven by an increase in Ontario. At the national level, the employment level in manufacturing has been hovering around its pre-COVID level since September.