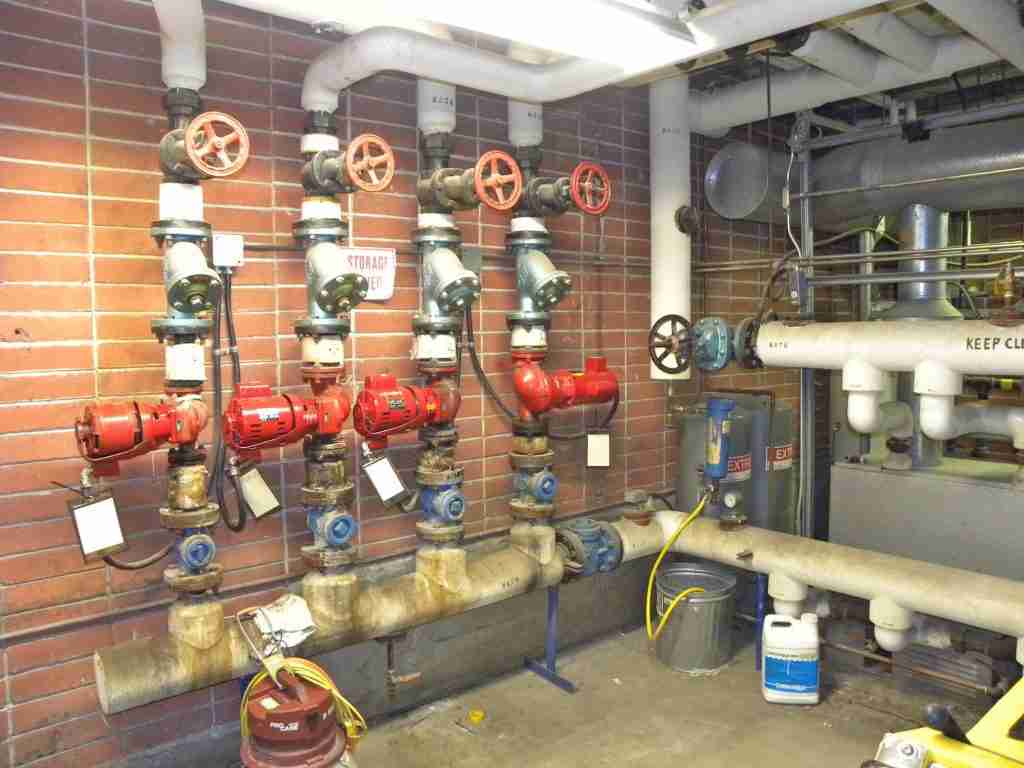 These smaller pumps are doing approximately the same job as the large ones, but all four cost about a quarter of the price of one large pump and they can be installed by an apprentice plumber.

One of the greatest advantages in using hydronics for heating and cooling large buildings or groups of buildings is the relative size of fluid piping versus air ducts that move heat from where it is produced to where it is required. Large hydronics save space and energy over other systems, but we can often do even better with a bit of a re-think.

Large piping, pumps, boilers and other components are expensive and can be difficult to get in a timely manner. Big commercial pumps, for instance, may have six to eight weeks or more lead-times from date of order. Due to the customized nature and stocking costs of large hydronic specialties, replacement units and repair parts are seldom available locally – requiring facility managers to rely on costly belt-and-suspenders practices such as:

In these days of increasing pressure for building owners to continually revise and reduce budgets, what could possibly go wrong?

Rocketing up the to-do list for many buildings is the need to drive down energy use, both for cost reasons and, increasingly, for carbon reduction. Energy managers are scrutinizing every Watt of energy used in building systems, adding layers of control and monitoring and retrofitting systems with the latest energy-efficient technology, from variable frequency motor drives to insulation upgrades to condensing boilers.

For larger systems, the impact of these improvements on the budget can be harsh. Some older high-temperature hydronic systems are especially challenging to try and optimize for efficiency. There are some good ideas that may help de-centralize some of these larger systems and make them more efficient. It can work for big district heating systems down to individual buildings.

New systems can be designed to utilize the best in energy-saving technology right from the get-go, and we are seeing the dawn a new age of district energy distribution using lower temperature hydronics. It is going to make a lot of sense in some applications, but there are some alternative ideas in the mix as well. I am going to save this one as a whole new topic for discussion in a future article. 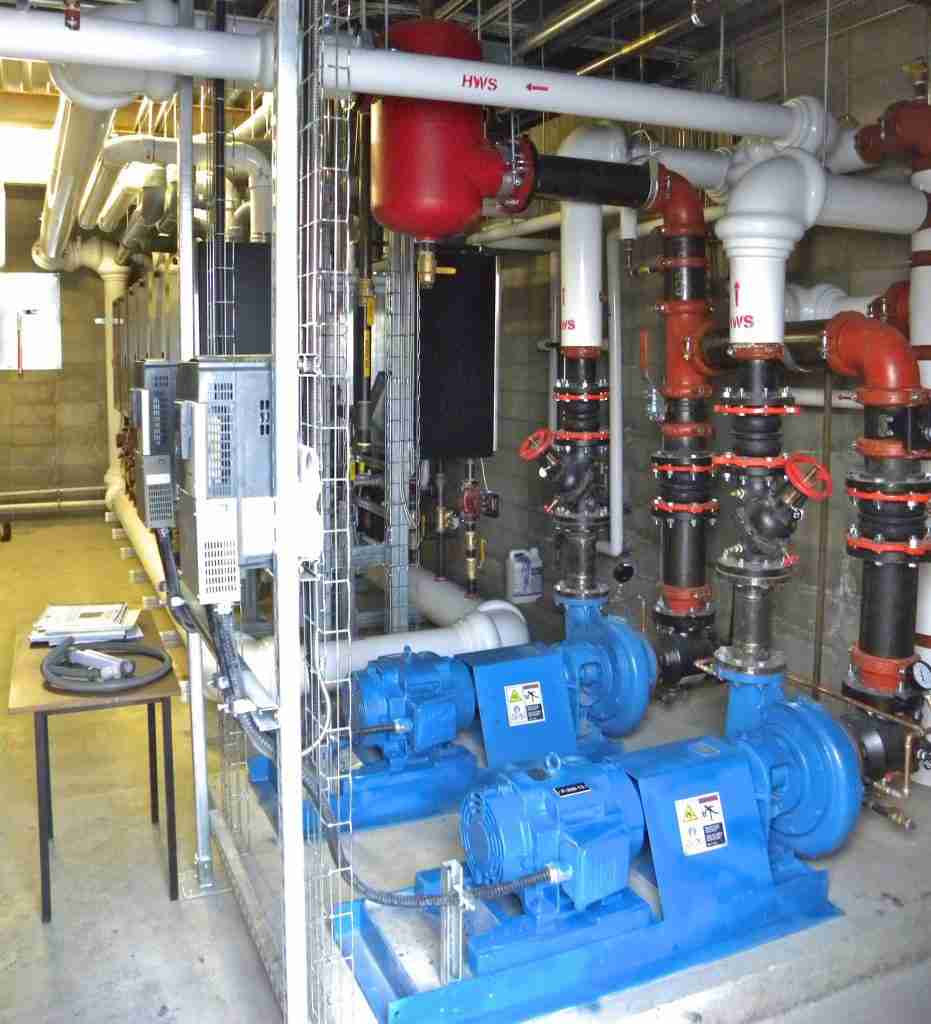 These large base mounted pumps need to be installed by a millwright and require six to eight weeks normal lead time for ordering. Two parallel pumps are normal for 100 percent redundancy in case of failure.

An army base upgrade

Back in the mid-1990s, my friends at Hydronic Systems, a Toronto rep., agency, got to work on a really neat project restoring heat at an old army base in London Ont. I haven’t been able to get that job out of my head. The base originally had a central utility plant to provide distributed steam to all of the buildings on the base. A lot of things came together to make this a viable project:

They had a commercial condensing boiler line (Fulton Pulse) that could be side-wall vented. The result was a decentralized large system (and a lot of scrap steel pipe).

Unfortunately, it is rare for all of these factors to coalesce. Most facilities with central utility plants are things like hospitals, universities, airports, factories and the like. Disruption is normally not an option, and these types of projects can go on for months, even years – but keep an eye out for the possibilities because hydronic heating today has all of the tools to make these types of conversions work really well.

Why were these systems not decentralized from the get-go? As hydronic systems evolved at the turn of the century, my read is that engineers were still working from what I call the navy mentality. As on a ship – land-based boiler plants needed to be close to the fuel supply, which in those days was coal or bunker oil. They also needed constant attendance by stokers and stationary engineers to operate the boilers without having them blow up.

Unlike ships, a land-based boiler plant could be given its own building – keeping the noise, stink and other nasty stuff away from the paying customers. Although steam was the distribution medium of choice in these big plants, high-temperature water distribution became popular as time went on.

And if the boiler(s) could heat one building, they could heat other buildings nearby, thus huge boilers, huge pumps, huge pipes to run through basements and tunnels, large heat losses, and a big maintenance crew to keep an eye on everything became the norm.

And security – don’t forget security. Back in my days at the University of Guelph, Ont., some ne’er do wells explored ways to be able to get down into the mythical utility tunnels to play – bad idea. The tunnels were reported to be really hot, one place these systems lose energy, and also housed the electrical lines used to keep all that superheated water moving around the campus.

The following developments made it easy to decentralize and provide highly efficient and smaller hydronic systems to individual buildings or clusters of buildings:

There are applications where the central utility plant is still a good solution. Solid fuel boilers using biomass are best employed in central heating plants. Large hospitals, prisons, airports and schools have security and operational needs that are often best served from a central location away from the public. There are many other opportunities however, in buildings large and small, to try and “right-size” hydronic systems and their components for cost and efficiency reasons. You should be on the lookout for them.

This idea is not new and not just for huge systems. Individual buildings with central boiler rooms can benefit as well. Whenever you see an application where there are large and lengthy runs of distribution and recirculation piping, you should ask yourself if there might be a way to divide a building up into multiple zones, each served by its own system.

This does not necessarily mean building individual boiler rooms, but it might be possible in some cases. Single large pumps can be eliminated if you can split off the piping system branch lines and turn them into zones, each one supplied by a smaller “smart” circulator.

Learn everything you can about primary-secondary piping – it is a powerful tool. Single large boilers can also be replaced with multiple boilers, a very common practice these days using modulating condensing boilers. Of course, the best time to do this is when designing a new system, but the retrofit of existing buildings is often quite easy.

For those problem buildings, don’t try and pound a square peg into a round hole – pick your battles. It is important to review each zone’s heating load because it is not unusual to find out that you can further downsize due to previous upgrades to the structure or usage patterns that have changed.

The decentralization approach is also being expanded in the HVAC world with individual mini-split heat pumps used instead of central heat/cool furnaces. Point of use DHW heaters are playing the same role. I stayed in a new hotel in Calgary recently that uses decentralized on-demand hot water heaters to supply clusters of individual rooms, eliminating the need for whole building DHW recirculation piping. Put on your thinking caps and get creative!