As contractors that own them know, a drain camera is a valuable tool. It was expensive to buy, but it makes selling drain cleaning and repair jobs much easier. Repairs can be made quickly because the operator knows exactly what and where the problem is.

So having a drain camera down for repairs is something everybody tries to avoid. “If you have a repair centre in your town, it’s going to be out of action for the better part of a week. If you have to send it out of town, you’re looking at up to two weeks depending on how fast you can get it there and what’s wrong,” remarked Dave Dunbar, national sales manager, General Pipe Cleaners, McKees Rocks, Pennsylvania.

That’s particularly irritating for the owner or manager when the damage is a result of misuse, but this type of damage is among the most common that manufacturers and repair shops see.

This is the right way to push the camera down the drain; supporting the pushrod and pushing in short careful motions.

There are three major ways in which cameras and pushrods get damaged; kinking the pushrod by violently thrusting it into the drain, not watching where the camera is going on the screen or trying clear a blockage with the camera head.

“Despite all the technology we must remember we are still at the mercy of how a system is plumbed,” said Adam Teets, manager, training and technical service, for Ridgid, Elyria, Ohio. “The more bends installed the harder it will be to negotiate them. Sometimes the best remedy is to know when to stop.”

Damage sometimes occurs because the technician is trying to push the camera into a pipe that is too small. It might look large enough, but it’s not. “A four-inch diameter pipe with a heavy presence of calcite can sometimes only have a two to three-inch inside diameter. This can definitely cause the camera to get jammed,” noted Frank D’Andrea, president, Ratech Electronics, Toronto. 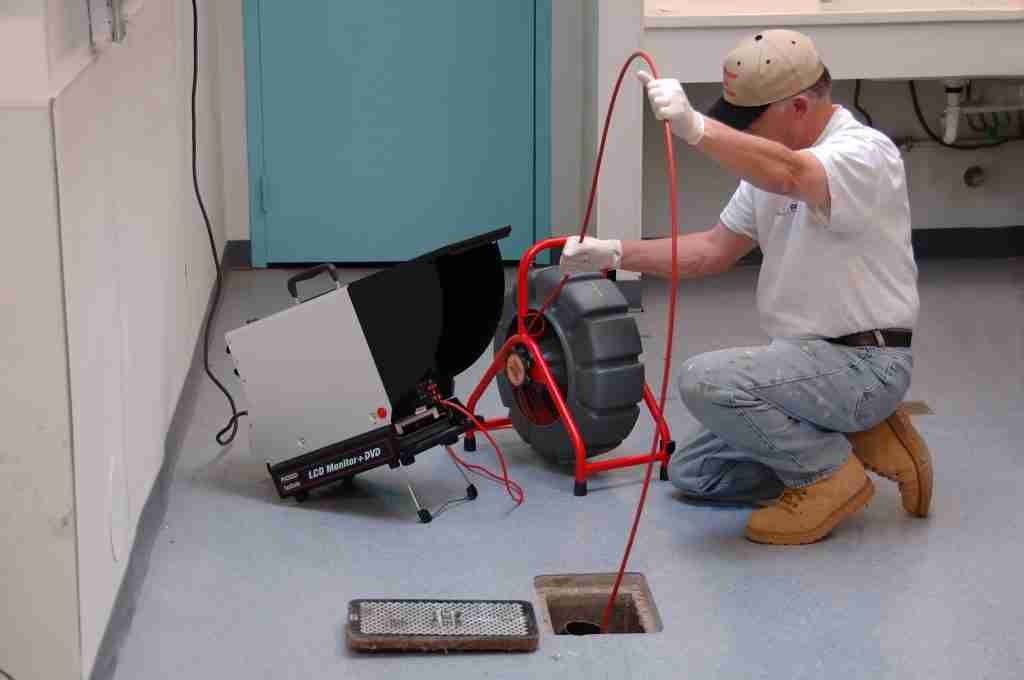 And then there’s the wrong way. This plumber will almost certainly kink the cable.

Forcing it will break the camera or pushrod. If it gets stuck, the camera can be damaged or even pulled apart while trying to get it out of the drain.

Cleaning the pipe with a water jet machine prior to putting the camera down is helpful. As well, using the protective sleeve where the pushrod enters the drain and a protective skid on the camera itself will reduce the possibility of damage. 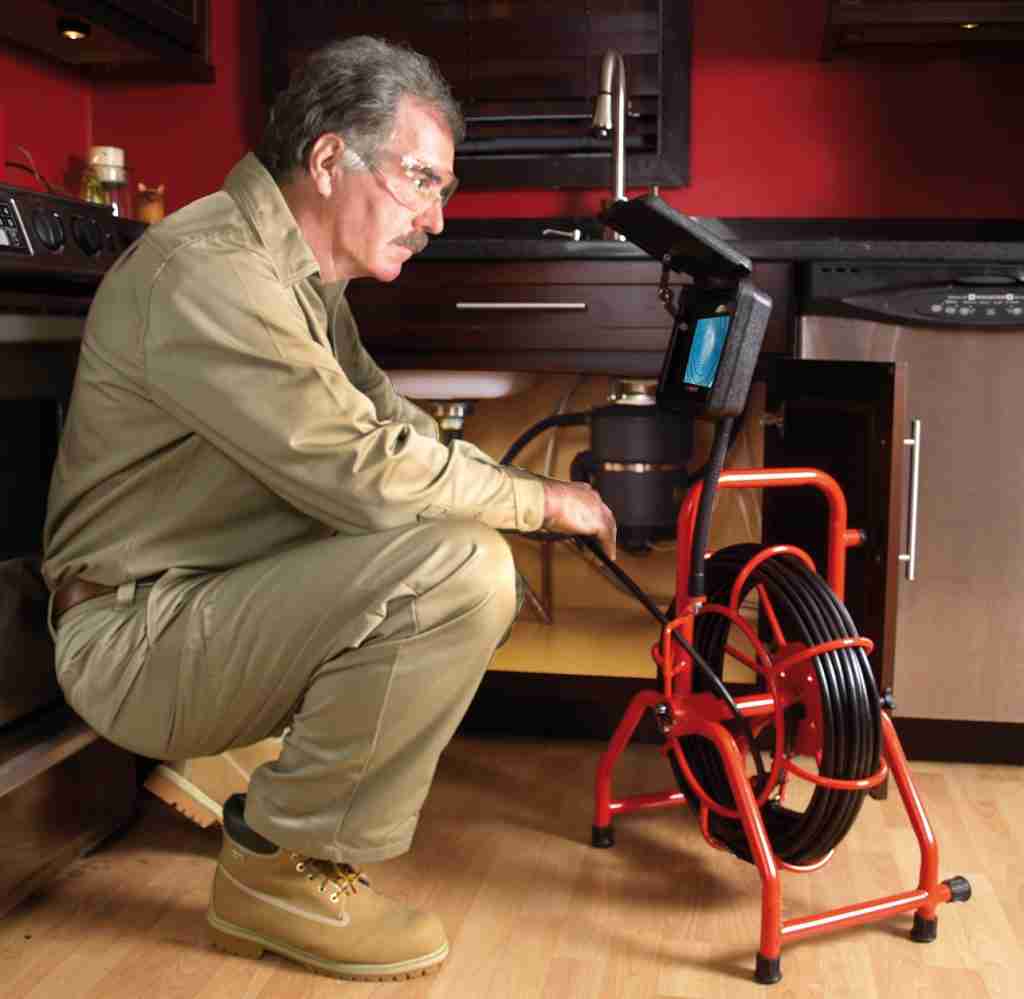 Watch where you are going! It’s critical to keep an eye on the screen to know when to stop.

Or, “maybe you are watching the screen, but you are trying to clear the blockage with the camera. People usually try to do this when it’s not their camera.”

Cleaning the pushrod and camera after each use is critical. Putting it away wet and dirty can cause corrosion of the internal electronics.

“The number one rule for an employee to take care of equipment is to wipe it down after each use with some bleach,” noted D’Andrea. Teets suggests a wet cloth and mild detergent. Both caution against using a pressure washer.

“While I don’t see it as being an issue on the push cable itself, one should be careful not to apply high water pressure at connection points or at the center hub of reels. That most likely will force water in behind seals, which will lead to some costly repair bills down the road,” Teets added.

The typical repair – nine out of ten – is a “re-termination.” That is a repair for a kinked pushrod or where it enters the spring that allows the camera head to maneuver around tight bends.

The cable must be cut and the wires soldered back together with everything then put back together to be as strong as original. Because of the materials and skills required, it can’t really be done in the field.

All major manufacturers have authorized warranty repair shops – your local rep can supply a list – and typically insist the unit be sent there so that it can be inspected and repaired by a trained technician. The repair centre will determine if repairs are covered by warranty, something that’s seldom the case with a cable re-termination because it’s usually the result of misuse or wear and tear.

Every time a pushrod is repaired, typically about five feet has to be removed. Some contractors buy longer pushrods knowing that there will inevitably be issues over the years, noted Teets.

Changing major components can be done in the field if necessary, he added. In an emergency, the camera head, the entire pushrod and the interconnect cord can be replaced.

Manufacturers are typically reluctant to simply send parts to the contractor, noted Dunbar. “Our experience has been that when you send people parts and tell them ‘this is what you do and this is how you do it,’ if they don’t have experience doing that it causes more problems than it solves.”

The next most common issue is to repair or replace the camera head. In fact a surprisingly common type of repair results when the technician pushes the camera down the line, finds the problem, and then cuts the pipe before first pulling the camera out. “You wouldn’t think anyone would do that with a six to ten thousand dollar piece of equipment, but they do. They get caught up in the moment,” remarked Dunbar. “If they can get the camera head back, it can be reattached.”

Camera heads can usually be repaired. Replacing the lens cap or cover over the LEDs is a common fix and typically cost from $250 to $1000, something every technician needs to consider before using the camera head as a battering ram.

Manufacturers make a number of accessories to prevent damage to the camera and help it go down the drain easier. The most common is the trap skid mentioned earlier, along with the pushrod protector or sleeve. For larger lines and cameras, manufacturers offer universal roller skids with spring-loaded wheels that keep the camera centered.

However, each situation is different, noted Teets. Things that help in one situation may be a hindrance in others. “Take centering guides, for example. They work great at keeping the camera head elevated so we can see. However, they add increased diameter to the overall footprint and add a potential catch point that could be a problem. The key is to not allow oneself to ‘lock in’ to a set procedure. One day a star guide may be better than a ball guide and sometimes a situation may call for a roller dolly and on another job no guide at all allows me the best movement – it will vary.”

The old adage that “you get what you pay for” is true with drain cameras too. There are significant differences in construction and manufacturer support for quality equipment versus less expensive cameras.

Equipment from established manufacturers benefits from years of research and development along with experience in the field, making cameras, pushrods and reels as durable as possible.

“Most drain cleaners and plumbers experience only occasional problems,” said Dunbar. “The camera lasts a long time for people that are careful and treat it like it’s something precious.”