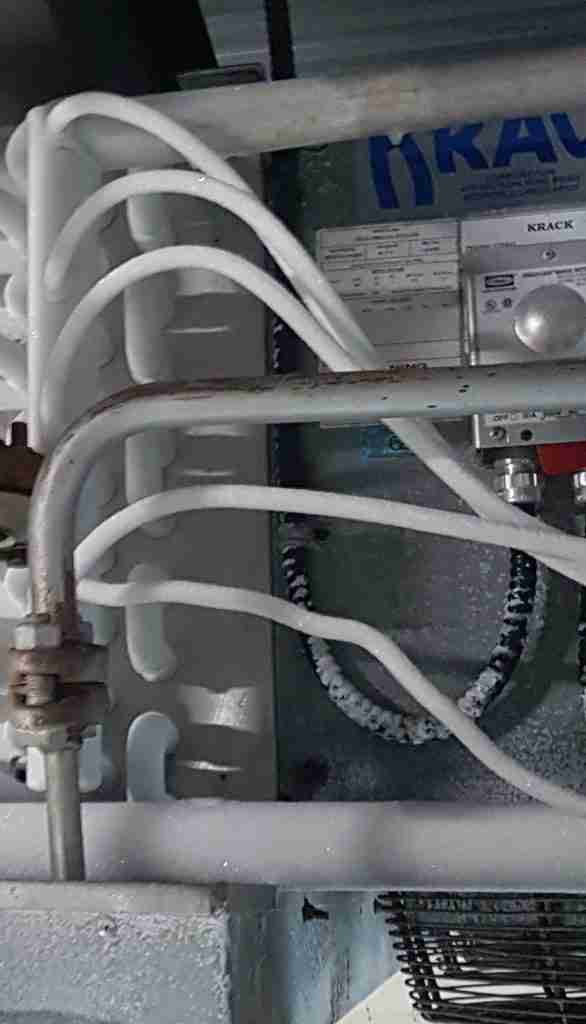 Frost build-up on the evaporator can spread to the distribution tubes.

This is the same phenomenon that causes condensation on a glass of water. We have all had the experience of a glass that has a low enough temperature to cause the moisture to come out of the ambient air and make the glass drip. For air conditioning systems, this is happening all the time, but it is occurring at a temperature that is above freezing so there is no need to consider frost build-up on the coil.

For refrigeration systems that operate with coil temperatures below freezing (all coolers and freezers), we have to implement controls and systems to remove the ice. Another important consideration is how much frost and ice forms. Ice formation is a function of both the coil temperature and the humidity in the refrigerated space; this humidity is usually caused by infiltrating air but can also be from an internal product or process (i.e. open water tanks). Coils located in high use walk-in freezers that are located in hot humid poorly ventilated kitchens will build up more ice than the same coils located in a long-term storage freezer.

There are several methods we can use to remove ice from evaporator coils and the three most common are air defrost, electric defrost, and hot gas defrost. Water defrost and embedded glycol defrost are less common but are seen in some specific applications, with embedded glycol becoming a bit more popular.

The simplest way to get rid of any frost build-up is air defrost. This methodology involves letting air from the refrigerated space go through the coil with the refrigeration turned off. Obviously, the air has to be above freezing for this to work.

There are challenges with air defrost. During the time that a defrost is occurring, there is no active refrigeration. The ice melting is adding some cooling to the room, but it is not the same as having the refrigeration system turned on; which means that on single system refrigeration systems like a stand-alone walk-in cooler, the temperature of the refrigerated space will climb.  Air defrost can also take a long time when there is significant ice build-up and it has a hard time removing ice when an abnormally high build-up occurs. 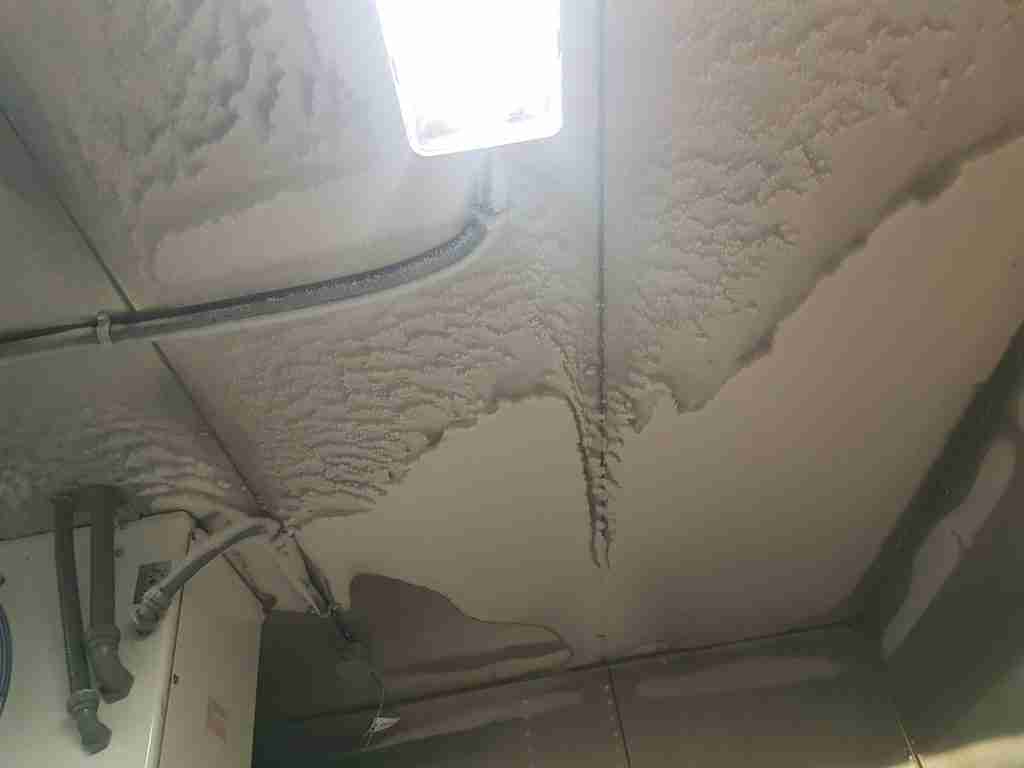 A freezer with high infiltration or a defrost that is raising the temperature too high can result in the problem spreading.

For example, if you leave the door to a walk-in cooler open, more frost than normal will build-up on the coil due to the humidity in the infiltrating air. Left for long enough, the coil will become a block of ice. Obviously, trying to use air from the refrigerated space to melt this block of ice will take a really long time. Air defrost is common and functions well for 2 C to 4 C cooler applications where we don’t expect frequent high infiltration situations.

When we need to remove ice from coils that are in air that is below freezing, we have to add energy to the coil somehow. Here, the simplest and often least expensive way is to embed electric heaters in the coil and turn them on periodically – with the refrigeration system off to that coil of course. The heat melts the ice and we turn the refrigeration system back on when the ice is melted.

The challenge with these types of defrost systems is it takes a while for the coil to warm up and there is a cost associated with the additional wiring and electrical service required. For most small commercial systems, this cost isn’t huge, but as the systems get larger it can become significant.

Another option for removing ice from coils is to use hot/warm refrigerant vapour that is already in our refrigeration system. The general principle here is to use refrigerant vapour to heat the coil which, when controlled well, will add a lot of energy to the coil quickly. There are many different detailed ways to do this and a detailed discussion about the many different configurations is an article on its own.

We can reverse the refrigerant flow in a reverse/cycle hot gas system, or we can install the third pipe and then push the liquid that forms during the defrost into a lower pressure liquid line or into the suction line. A well-designed hot gas defrost system is much more energy-efficient and faster than electric defrost.

The limitation and challenges with hot gas defrost appear with systems that have a small number of evaporator coils. The energy used to create the hot gas must come from somewhere, which means that some of the coils must stay in refrigeration to generate the hot gas that is being used for defrost. 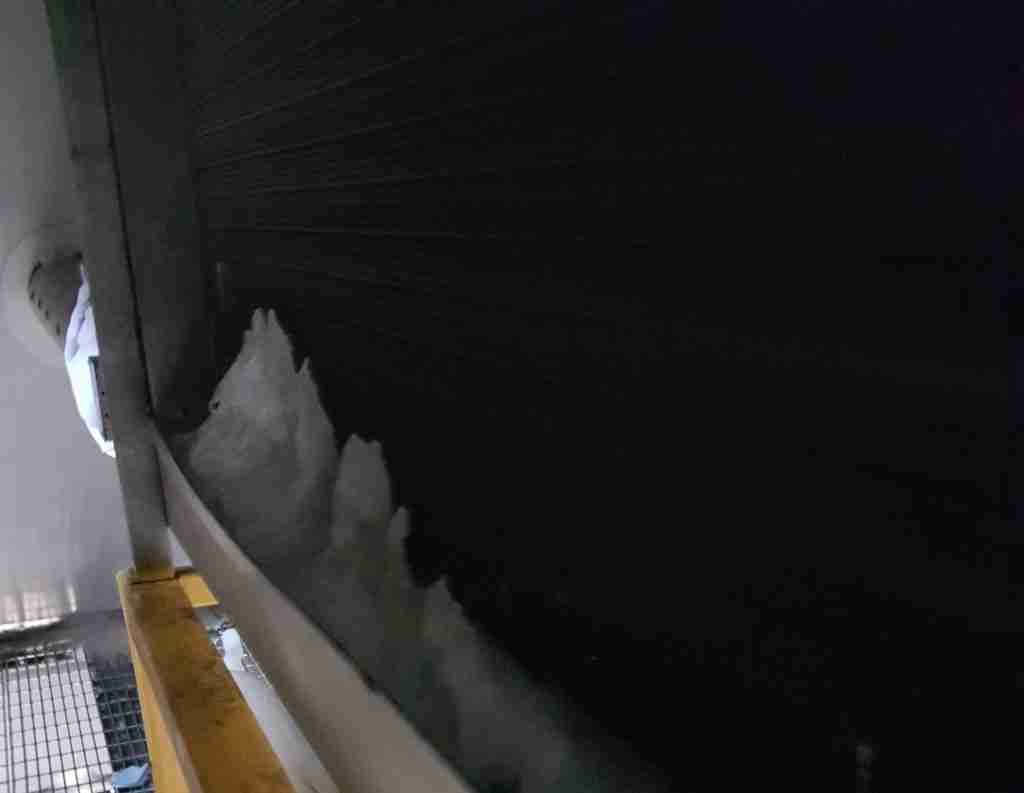 A defrost problem on the evaporator is causing a sheet of ice to build on the coil.

On single compressor systems, it is possible to flip the system into a heat pump of sorts and turn the evaporator into a condenser. Several manufacturers have systems that do some form of this that work quite well. However, I have encountered a lot of challenges using these types of systems in cold climates and personally shy away using hot gas defrost on single compressor single coil systems in Canada.

Embedded glycol coils basically have a second set of tubes interlaced in the evaporator. Warm glycol is pumped through the coil to heat up the coil and melt the ice. This has the same advantage as hot gas in that the coil warms from the inside out, which results in quicker defrost than electric. The coils are physically larger, which adds capital cost but the defrost can be done with waste heat, decreasing energy use.

Water defrost is exactly what it sounds like; water is sprayed on the coil and melts the ice. These types of defrost systems are relatively common on spiral freezers and blast tunnels but can also be used in general freezer applications. They are very fast and have the added advantage of helping to keep the coil clean.

Obviously, water in a below-freezing environment can cause problems when things go wrong. A plugged drain on a water defrost coil is much more serious than on a hot gas or electric defrost coil where we only need to drain the melted ice.

In a lot of cases, defrost accounts for a significant portion of the energy use of a refrigeration system and when defrost systems malfunction the resulting ice build-up can be significant and problematic. This leads us to overuse defrosts to avoid nuisance service calls.

In a future article, we will dive more deeply into how much energy is added to the refrigerated space during defrosts and how inefficient a lot of defrost set-ups are. We will also look at specific control methodology for some of the different defrost methods.