You are at:Home»Feature Articles»Flood protection: Help your customers avoid a catastrophe with a water alarm shutoff! 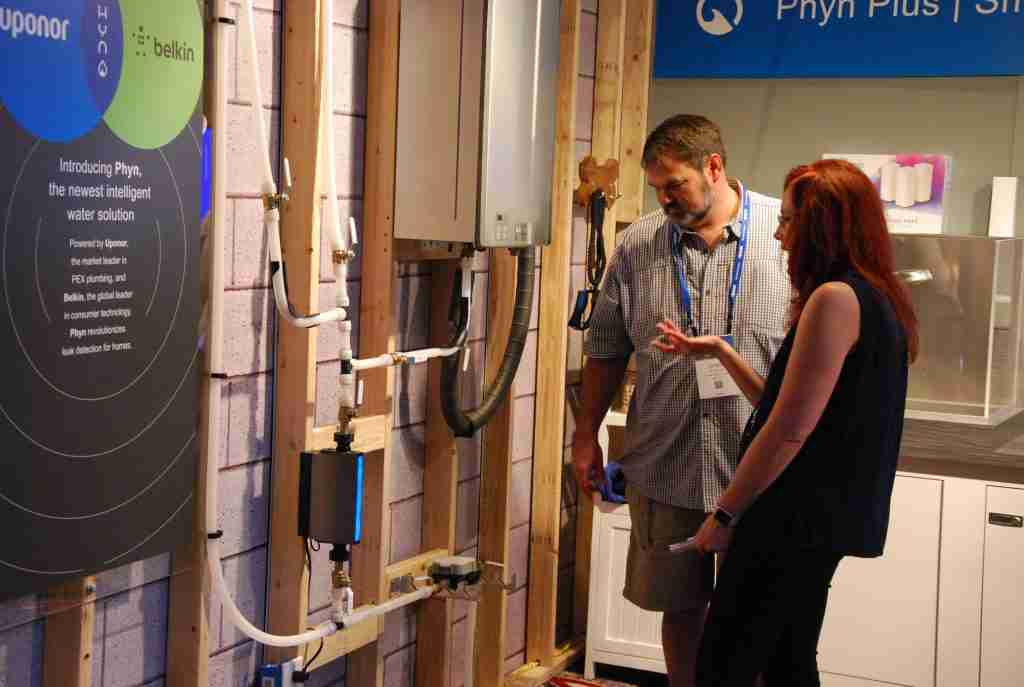 Uponor’s Kate Olinger explains the company’s Phyn Plus smart leak detection system to a contractor at the 2018 Uponor Convention in Las Vegas.

Water damage can be a silent house killer – the homeowner may not be aware of a leak until it’s too late. On the other hand, the bottom might drop out of the water tank, a washing machine hose might break, or a pipe connection might burst, and the resulting flood will be immediately apparent. But manufacturers have designed systems and valves to limit the potential for leaks or floods. Water alarm and shutoff systems can go a long way in protecting your customer’s property.

It may also help the plumbing company establish a long-term relationship with the customer, remarked Maggie DoRego, product marketing manager at Lixil Canada Inc., Mississauga, Ont. “In addition to maintenance only, professional plumbers can now increase the trust and satisfaction rate of their customers by offering a new service of prevention solutions.” 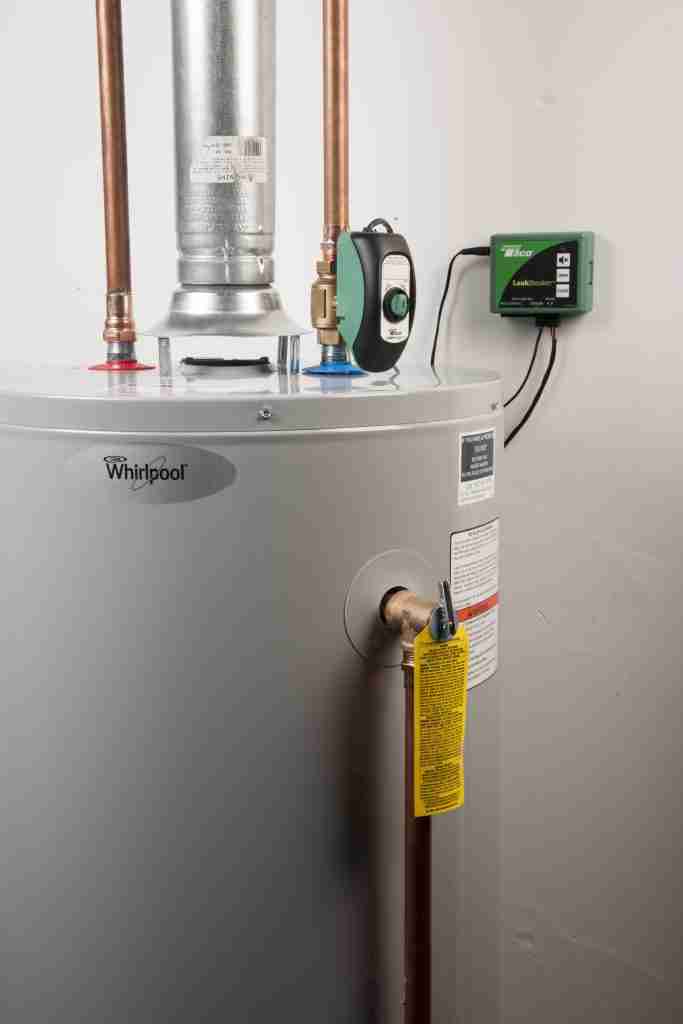 Each company has a different solution, so there are several options for homeowners. “New products are constantly being added to this industry,” said Rick Brindamour, product manager of valves and accessories for Taco Home Comfort, Cranston, Rhode Island. Companies currently offering these types of systems include Watts, American Standard, Honeywell and Samsung, to name a few.

In one case a homeowner installed the Flood Breaker and received a notification that there was some type of leak but couldn’t find the source. He called Taco for help to troubleshoot the problem. Per Taco’s instructions, he put food dye into his toilet system. He discovered that the toilet was leaking and was able to fix the issue.

In addition to maintenance only, professional plumbers can now increase the trust and satisfaction rate of their customers by offering a new service of prevention solutions.

Taco’s Leak Breaker works in a similar way but is installed on the water heater. It is available with Taco’s E-link home monitoring system that sends homeowners emails or text alerts when the product has shut the water off due to a leak. It can be set up with more than one email or phone number, including the contractor’s. “E-link is great for homeowners that are wanting to know what is going on in their house when they aren’t there,” said Brindamour.

These systems have become more popular over the last few years. Many plumbers are being asked by homeowners to install one of these systems, said Brindamour. Not only do they add extra value to the homeowner, but they present a great sales opportunity for plumbing companies.

One of the newer developments in this industry comes from Lixil (American Standard and Grohe) with their release of two new products in December: the Grohe Sense and Grohe Sense Guard. Similar to Taco’s Flood Breaker, the Grohe Sense Guard is installed in the water line into the house. However, this system utilizes multiple sensors to track water pressure and the flow of water in the house, as well as measuring the general water consumption, reported DoRego.

It will automatically turn the water supply off when it detects unusual water activity and alerts the homeowner through the Grohe Ondus app. The app is compatible with Apple and Android mobile devices. It will also measure the system temperature to indicate the risk of frost and periodically conduct microleakage tests by measuring and tracking pressure drops in the water line.

The entire system is self-learning. “This smart technology allows each home to have a customized detection system based on how they use water which, in turn, will result in a decreased rate of false activations.” 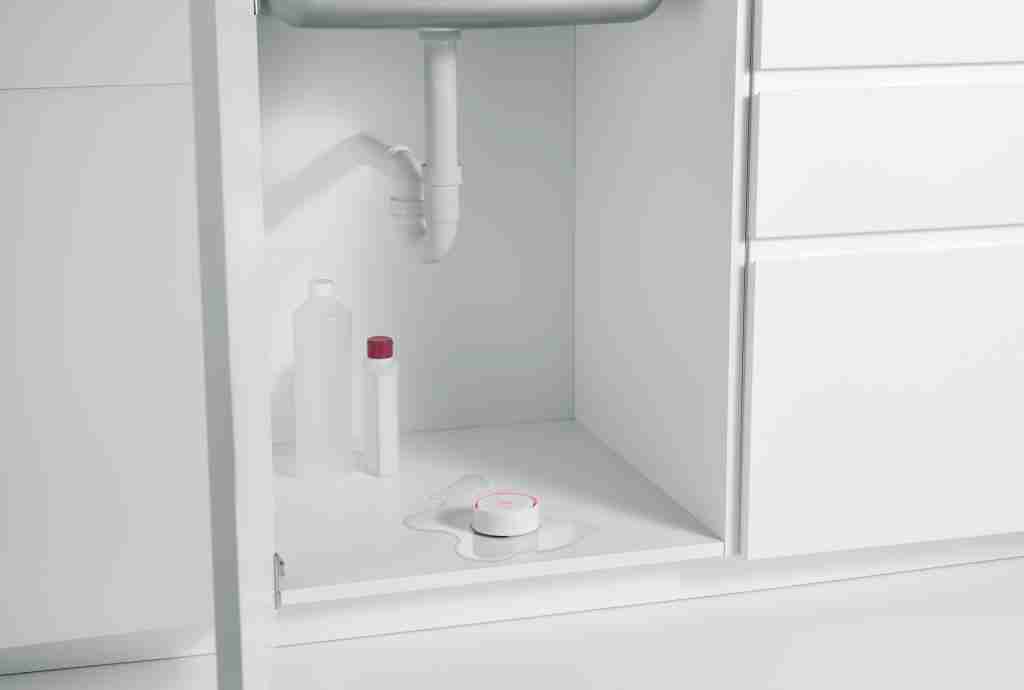 The Grohe Sense operates either as a stand-alone leak detector or with the company’s whole house system.

The Grohe Sense Guard is available together or separately with the Grohe Sense. The Sense is a smart water sensor that is placed in the home wherever there may be a risk of leaks or floods, such as basements, laundry rooms, bathrooms or kitchens. It alerts the homeowner with an alarm sound through the “puck-sized” sensor and through the smartphone app, reported DoRego. 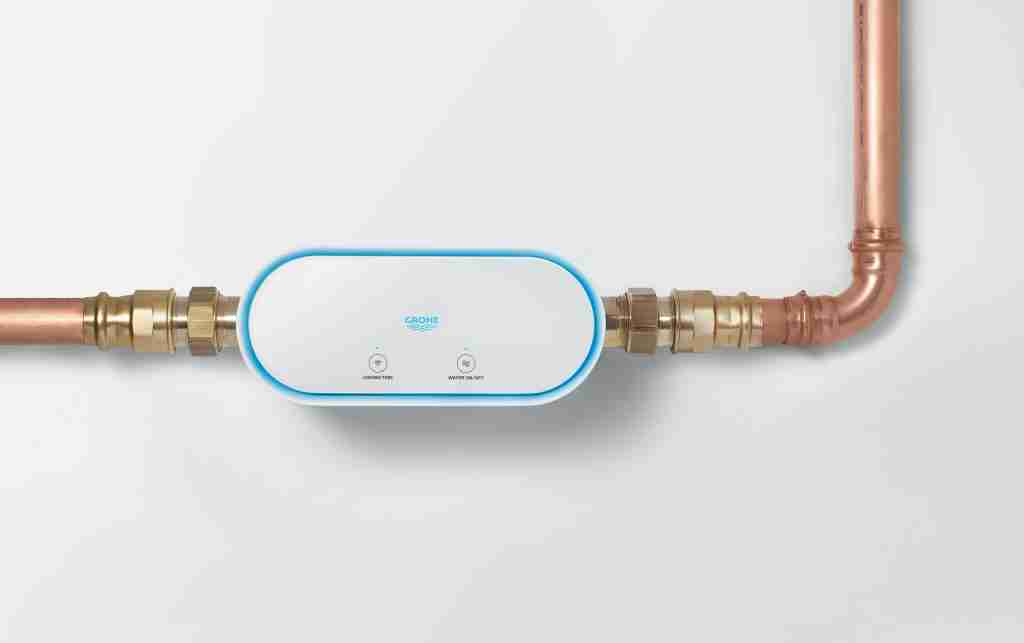 Watts and Uponor also offer flood protection systems. The Watts FloodSafe is designed to prevent water heater leaks from becoming catastrophic. It detects the presence of water on the floor or in a drain pan beneath the water heater and automatically shuts off the water supply and power source to the water heater. The system is sized for three-quarter inch or one-inch water supply lines.

The Uponor Pro Squad contractor program offers another option for contractors with the company’s Phyn “smart water assistant and shutoff” system that attaches to the main water line. An app notifies the homeowner – or plumber – when there’s a problem. The water can be shut off from a smartphone and, if the Phyn system detects a larger leak, it shuts down the system automatically.

The system also runs daily tests to discover when there is a hidden drip or smaller leak before it becomes a larger problem. And it monitors and records how much water is used daily, weekly and monthly to allow homeowners to keep on track of their water use.

Some insurance companies may offer discounts to homeowners for installing a water monitor system in their house, which may be another selling point for plumbers. It varies based on the insurance provider. The Insurance Bureau of Canada suggests that homeowners check with their provider to see if they qualify for discounts.

Slow to catch on

Bradford White Canada, Halton Hills, Ont., partnered with another manufacturer about five years ago on a leak detection device, but stopped offering it after a couple of years because “it just didn’t catch on,” said Paul McDonald, general manager. “Not enough people take advantage of these systems,” he said. Only a few hundred of the device, which was an add-on to the water heater, were sold. The unit cost $300 and that was likely a factor, he added.

That being said, McDonald remarked that there are still benefits to both homeowners and plumbers. “If it’s sensing a leak, it’s because there’s a leak! The heater is going to have to be replaced anyway. It works for the plumber.”

And anyone who has ever experienced a flood knows that the cost is minuscule compared to the cost and hassle of flood repair.