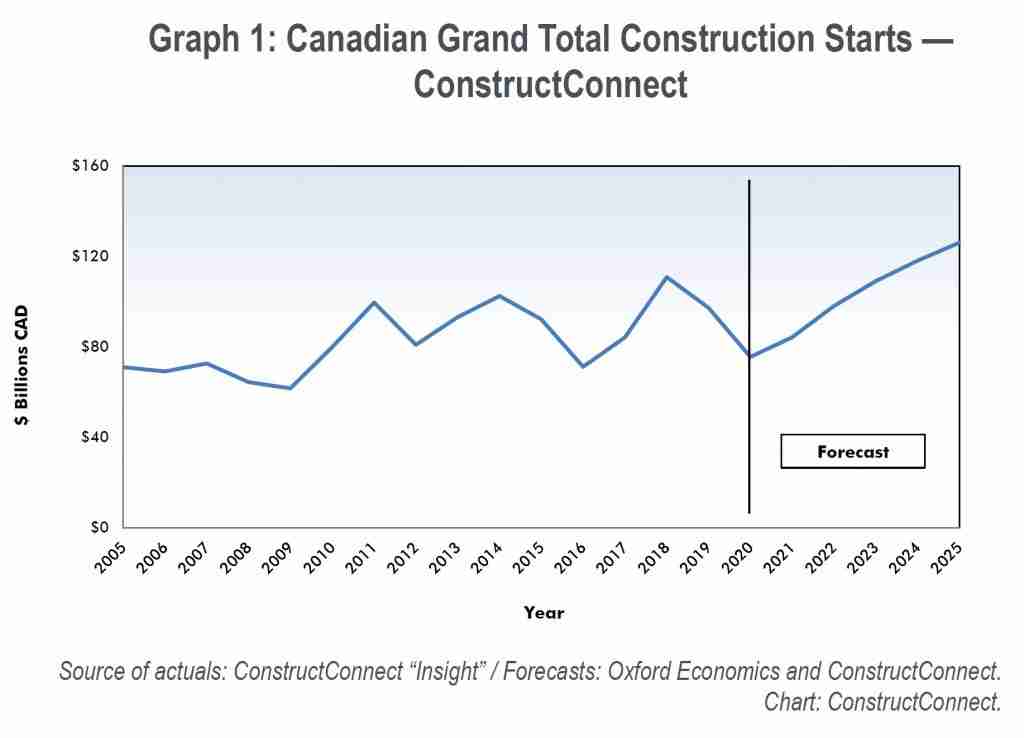 Cincinnati, Ohio—After experiencing plenty of lows in 2020, the Canadian construction industry can expect growth in the next few years.

Total construction starts in Canada for the fourth quarter declined by 43.4 per cent, year-over-year, and 22.3 per cent for the entire year, reports Construct Connect.

Almost all construction sub-sectors posted a decline in 2020. Large projects in Ontario and Quebec earlier in the year limited the extent of the annual decline for the second quarter after restrictions were put in place on most construction activity.

Residential building construction experienced the sharpest drop in 2020, down 28 per cent. Single-family homes were heavily affected by construction disruptions earlier in the year, but rebounded strongly, up 28 per cent, year-over-year, in quarter-four. By contrast, the multi-family industry for the last quarter was 67.3 per cent below its level a year earlier as demand shifted away from city living.

New non-residential building fell 23.1 per cent in 2020, with annual declines in all categories except transportation terminals and warehouses. The former was driven by a large project in Ottawa in the second quarter, while the latter benefited from investments in logistics facilities to accommodate more online shopping.

Civil engineering construction fell 17 per cent in 2020, with declines in all sub-sectors expect for bridge construction, which was boosted by a project in Surrey, British Columbia in the first quarter.

Economic recovery in Canada has slowed as the pandemic worsened. Increased restrictions and a slower-than-expected vaccine rollout will result in a 0.7 per cent contraction of GDP in 2021, first-quarter, reports Construct Connect.

Employment fell by 62,000 in December, the first decline since April of last year. “We expect further job losses in early 2021,” explains Construction Canada.

Non-residential construction should expect a few tough years, especially in new office construction, where there is a lack of clarity over the eventual return to work. The hotel and motel sectors will see a growth of around 12 per cent in 2021, however, it should be noted that in 2020 there was a 50 per cent decline. Demand for new hotel construction remains limited as travel has been restricted for close to a year.

For other areas of non-residential construction, it doesn’t appear to be as bleak. The warehouse sector has seen growth of 19.6 per cent in 2020 and is forecasted to grow 14.9 per cent in 2021. Canadian manufacturing is also set to see strong growth with starts nearly doubling.

The civil engineering sector, the largest part of Canadian construction, is forecast to rebound by 16.1 per cent in 2021. The Canadian power infrastructure industry should also expect growth over the next two years.

The residential sector is forecast to grow 5.5 per cent this year. This is largely due to the single-family sectors.

Significant population growth, averaging around one per cent per year, is expected to cause the demand for new housing continue to go-up past 2025, reports Construct Connect. The “millennial age grouping,” normally referring to those born between 1996 and 1981, are amongst the most active new homebuyers with many young adults gravitating towards single-family homes.