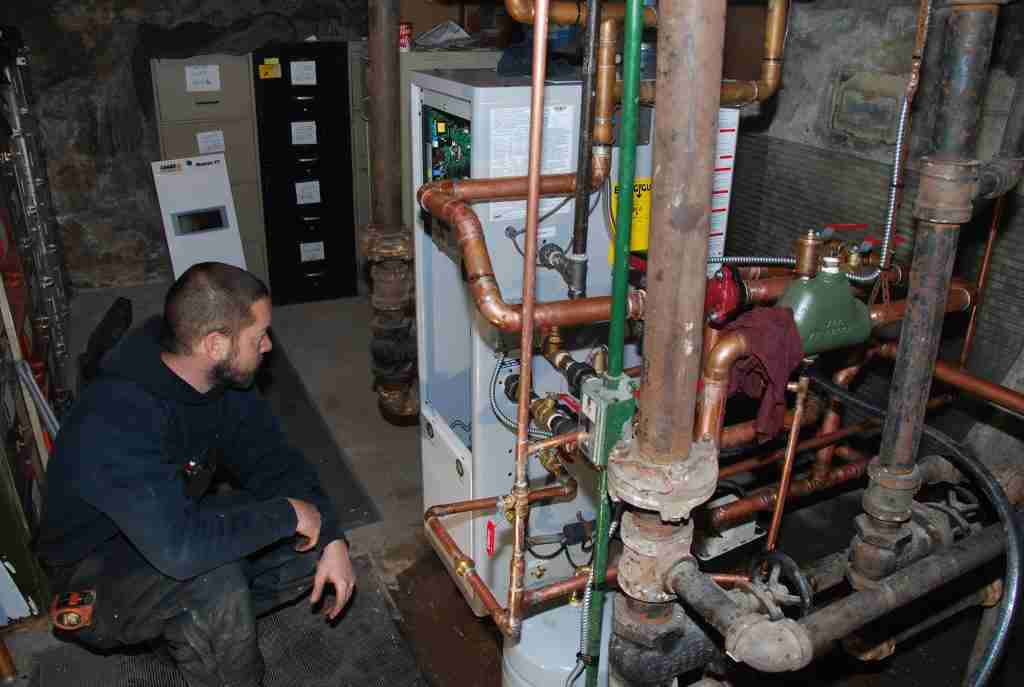 One of the oldest homes in Oshawa, Ont. was a good candidate for an energy efficiency update when the existing cast iron natural draft boiler started giving trouble after more than 30 years of reliable service.

167 Simcoe St. North is a large three-storey century home that has been converted to offices, with the dental office of building owner Dr. Timothy Wagner on the main floor and, coincidentally, the offices of Plumbing & HVAC Magazine on the second floor. The top floor is vacant. 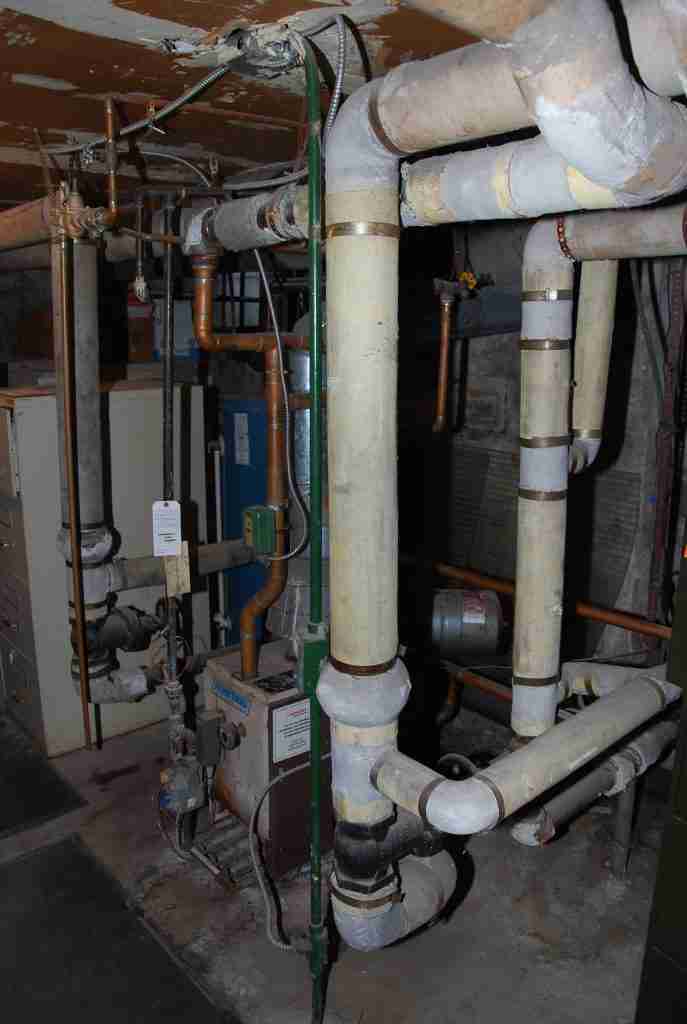 After years of service, it was time to replace the old boiler. But first, the asbestos wrapped pipes had to be dealt with.

Wagner called on Advantage Airtech Ltd. of Pickering, Ont. to recommend a solution.

Installation supervisor and chief estimator Erich McDonald, after taking a good look at the existing installation, recommended a floor mounted LAARS Mascot 140,000 Btu/h modulating condensing combi boiler. It operates at 95 percent AFUE and modulates down to 10-1. It replaced the existing HydroTherm boiler, which was about 70 percent efficient, McDonald estimates.

Cast iron radiators typically operate at about 130 to 140F. “So, it made sense to go to a high-efficiency condensing boiler,” he added. A low-temperature system like this takes maximum advantage of modern condensing boiler technology. The demand for domestic hot water was quite low as there is no one living in the building and the only real DHW requirement is for washing hands. The building had a rental water heater, so installing a combi boiler with DHW made sense. The Mascot boiler has a built-in mini-indirect DHW tank. That ensures that hot water is available immediately and, when there is a call for more, the boiler makes additional DHW as required.

For Wagner, this space heating and DHW solution will result in a substantial operating cost savings through better energy efficiency from the boiler, reduced DHW energy use and, perhaps above all, no longer having to pay a rental fee on the hot water tank. 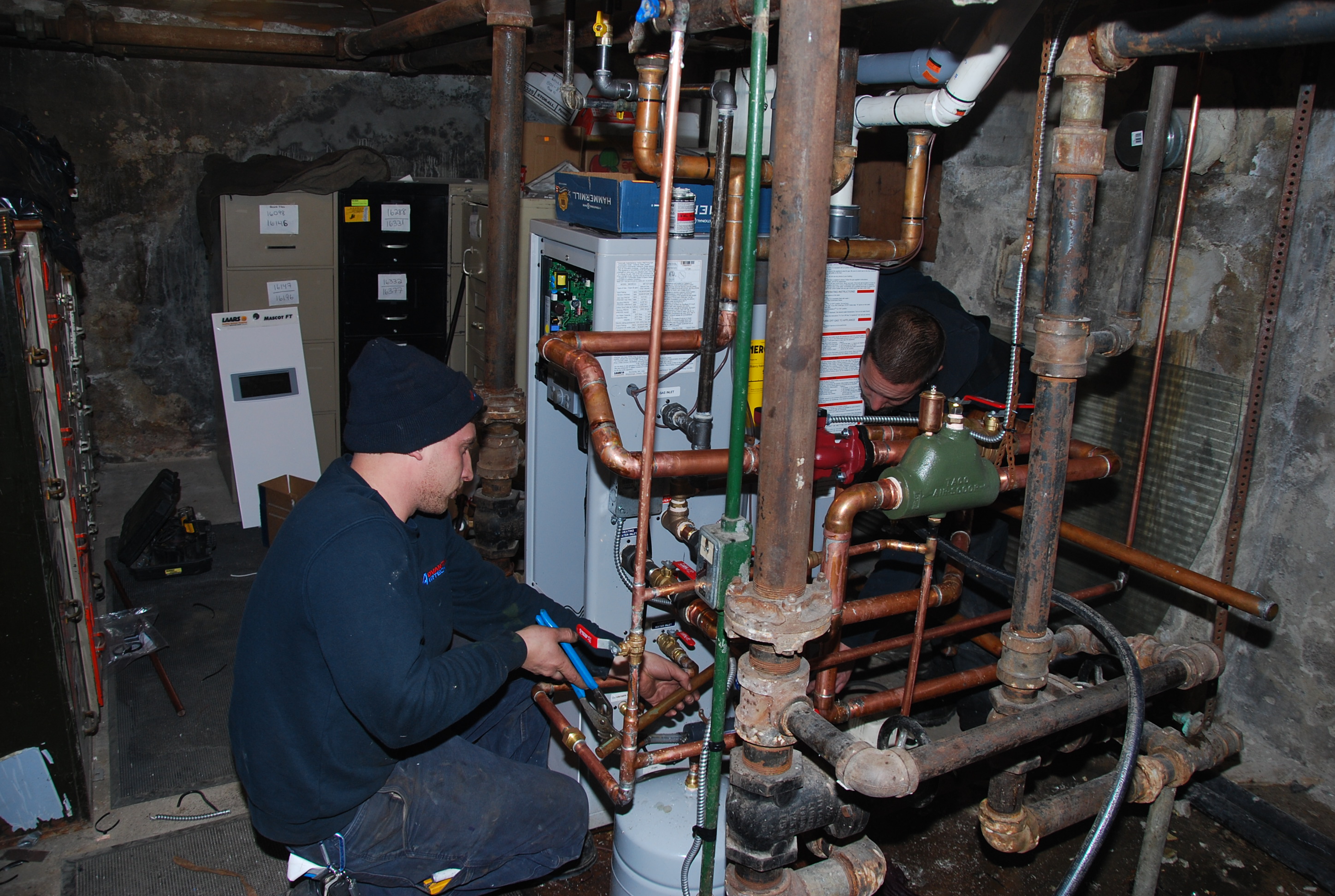 Spencer Allison, left, and Becker revised the piping to work with the new condensing boiler.

Like any old building, there were challenges. The ceiling was low, and space was tight in the mechanical room. “It was a very tight contained space we had to work in to get all the piping to work,” noted McDonald.

The original hydronic piping was wrapped in asbestos. Originally, the plan was to just remove enough of it to work on the boiler. “We could have possibly worked around it, but we had a discussion with Dr. Wagner and he had already priced out removal, so we determined that it would be best just to get the basement done at that point. That way, there’s no risk to anybody,” said McDonald. Alliance Environmental & Abatement Contractors Inc., Scarborough, Ont., removed the asbestos.

Like many old systems, this one had been repaired and reconfigured many times, noted lead HVAC installer Juston Becker, who with apprentice Spencer Allison installed the new system. Step one was to figure out how the original piping worked, he added.

The existing system was one continuous loop, something that wouldn’t work with a modern condensing boiler. 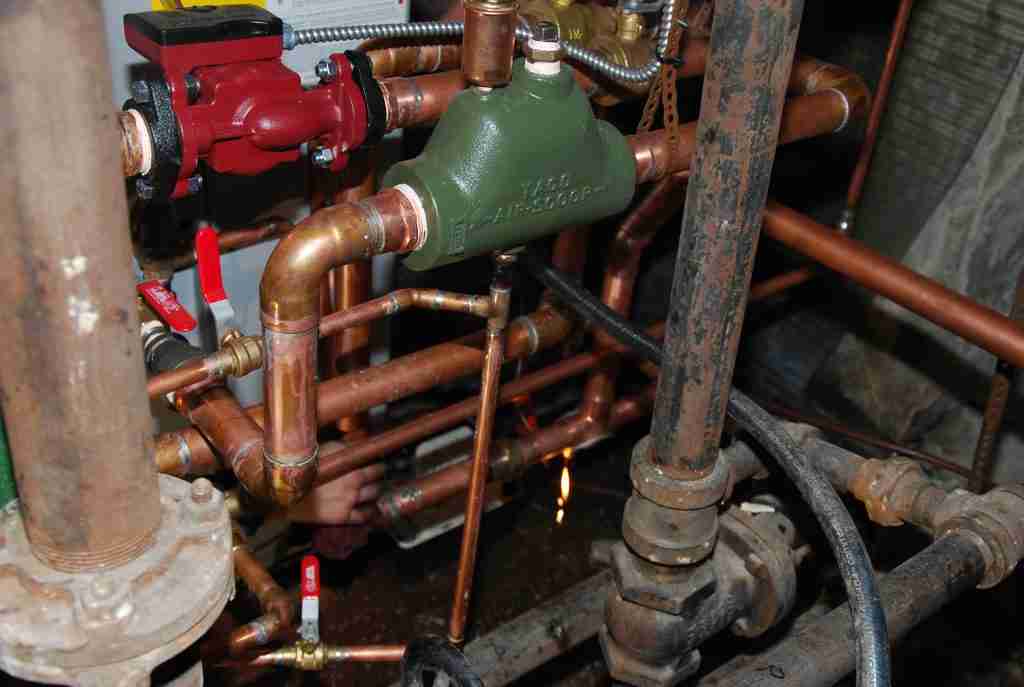 This included modifying the system into a primary/secondary loop configuration, with a short primary loop for the boiler.

That meant that Advantage Airtech Ltd. had to reconfigure the piping into a primary/secondary loop system with an additional pump for the secondary loop. “We went from an old style, just one big zone loop, to a primary/secondary piping arrangement,” noted McDonald. Basically, that meant connecting the existing piping together to form the secondary loop and then creating a new, and very short, loop for the primary. “Basically, it just comes out of the boiler and goes back into the boiler,” said McDonald.

The old system pumped away from the boiler; the new system pumps through the boiler to maintain the correct flow rate, explained Becker. A certain flow rate is also required to trigger the flow switches in today’s condensing boilers.

Much of the original steel piping was replaced with Type L copper. A Taco Air Scoop (air separator) was added to help remove air from the system and minimize the time needed to bleed radiators. There was no nearby floor drain, so a condensate pump had to be added. 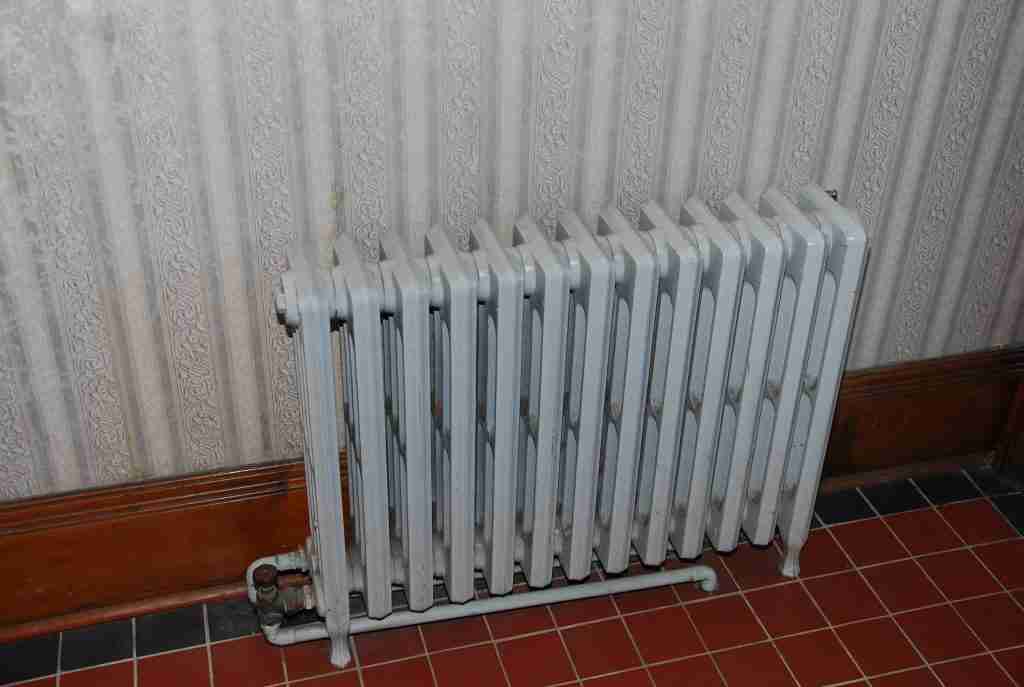 The century home has its original cast iron radiators which operate at 130-140F – ideal for a condensing application.

The only issue that came up was that the existing pump wouldn’t work with the new system and some additional re-piping was required.

The system is controlled through the thermostat on the main floor. The company installed a zone box so that when there is a call for heat, the pump in the secondary loop comes on and starts to move water through the system. This triggers the boiler control, which fires up the boiler and turns on the pump on the primary loop.

Advantage Airtech Ltd. has done many boiler and furnace retrofits in historic buildings over the years, noted McDonald. With 15 employees, the company does service, new installations and retrofits in residential, commercial and industrial buildings in a large area that encompasses the entire Greater Toronto Area (GTA).

The new boiler system at 167 Simcoe Street North is a typical example of the way the company upgrades an older hydronic system with modern equipment while maintaining the best features of the existing system such as, in this case, the cast iron radiators, which are still common in many parts of Canada.