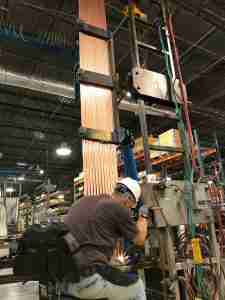 Mississauga, ON—Contractors, wholesalers, and manufacturers came together in a Zoom meeting on Dec. 16 to discuss the trade industries’ governing body in Ontario. The event was hosted by the Heating, Refrigeration, and Air Conditioning Institute of Canada (HRAI).

When Doug Ford was elected premier of Ontario in June 2018, one of his key promises was to shut down the Ontario College of Trades (OCOT)—the body set up to manage trade apprenticeship and licensing by the previous Liberal government. These discussions were held to determine how the industry felt they should be governed.

After a brief introduction period by Dorothy McCabe, government relations specialist of Ontario at HRAI, members were split into groups to have smaller discussions led by fellow HRAI personnel.

Plumbing & HVAC Magazine was put into the “commercial contracting” group. Martin Luymes, vice president—government and stakeholder at HRAI, led this particular discussion. One topic that was of interest was concerning “trunk slammers.” For Peter Inch of Roy Inch & Sons Heating Air Conditioning and Plumbing A Service Experts Company, his suggestion to dealing with them was to have wholesalers card those buying product from their stores. Although the issue of larger box stores like Home Depot brought up issues with this suggestion by Luymes. It was also suggested to start at the homeowner level and make sure that they are educated in the marketplace.

For those found to not be in compliance with enforcement, there was a bit of a “Goldilocks and the Three Bears” conundrum. Some argued that OCOT penalties were too aggressive, while others thought it wasn’t enough. A “three-strikes you’re out” model was also suggested. While Mike Verge, managing director at the Ontario Refrigeration and Air Conditioning Contractors Association, suggested to “throw the book at them.”

Over the three total sessions, there were approximately 100 members who registered and attended one of the meetings.

“While the input from members is being reviewing and analyzed, one thing that is immediately clear is that members have more to say about these critical issues,” explained HRAI in a press release following the meeting. “We don’t want to make recommendations our members aren’t behind,” said Luymes during his group-led discussion.

HRAI is expected to set up additional opportunities to discuss issues raised in the Dec. 16 sessions, sometime in 2021.