Ottawa, ON — Canada’s building energy codes are expected to look a lot different by 2030, but there are already several barriers to verifying buildings are being constructed to the current energy code, according to a new report.

The Pan Canadian Framework on Clean Growth Climate Change (PCF) — agreed to by all provinces and territories except Saskatchewan — called for Net-Zero Energy Ready (NZER) codes by 2030. Canada’s latest model codes, expected to be released in late 2021, are the first step in the market transformation of the buildings sector, as they introduce a series of increased performance tiers.

According to a report published today by Efficiency Canada, an energy efficiency research and advocacy organization at Carleton University, without early planning and intervention, the compliance regime will be further stressed trying to achieve one of multiple energy tiers in the NZER codes of 2030.

“Building energy codes and compliance are important tools we can use to achieve our climate objectives while advancing the clean economy,” says Kevin Lockhart, efficient buildings lead at Efficiency Canada. “If you care about climate change and creating good, local jobs, then you should care about building energy codes.”

While the federal government drafts national model codes, building codes are established by law in the provinces or territories in which the building will be constructed. Compliance with code falls in the purview of the city or municipality, known as the Authority Having Jurisdiction (AHJ).

“Tiered codes may appear straightforward,” notes Andrew Pride, the report’s author “however, there is a significant amount of work to be done on how to achieve the higher tiers and increasing awareness of the benefits in reaching the higher levels of efficiency those tiers require.”

In addition to calling for the establishment of national energy compliance guidelines and access to provincial/territorial subject matter experts, the report also recommends increasing stakeholder training, development of a national compliance database and funding to increase the effectiveness of AHJs in enforcing code compliance.

“The latest iteration of the code will drive energy efficient new construction and create market demand for a range of high-performance building products,” says Corey Diamond, executive director of Efficiency Canada. “This will, in turn, attract investment and create new opportunities and skilled jobs in Canada’s clean-growth economy.” 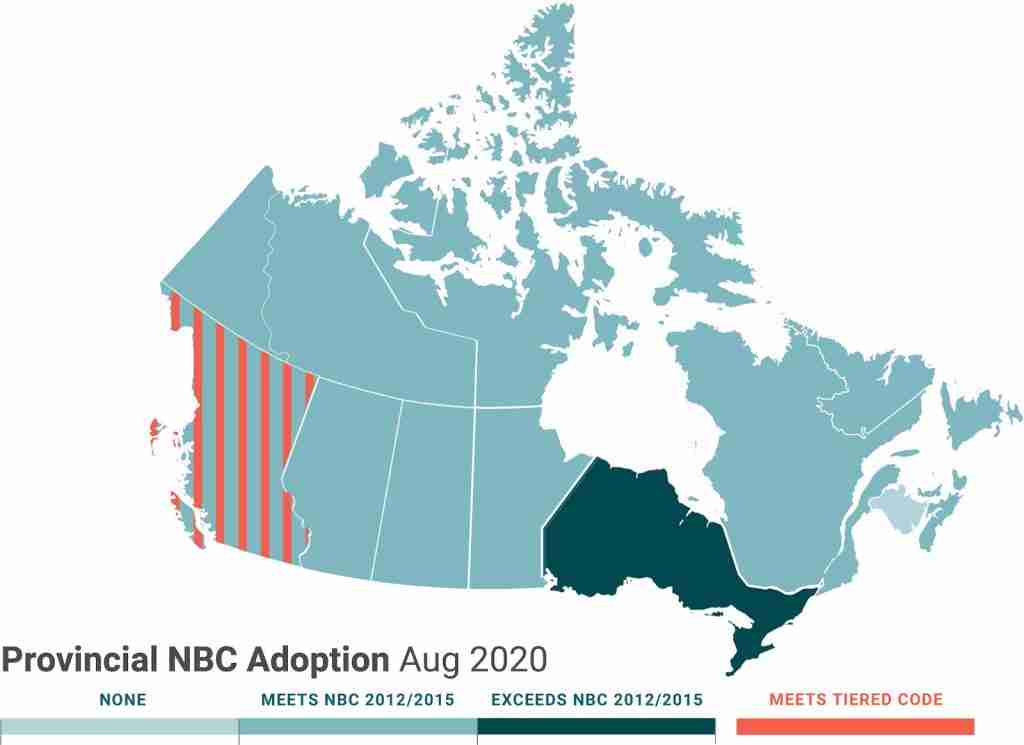