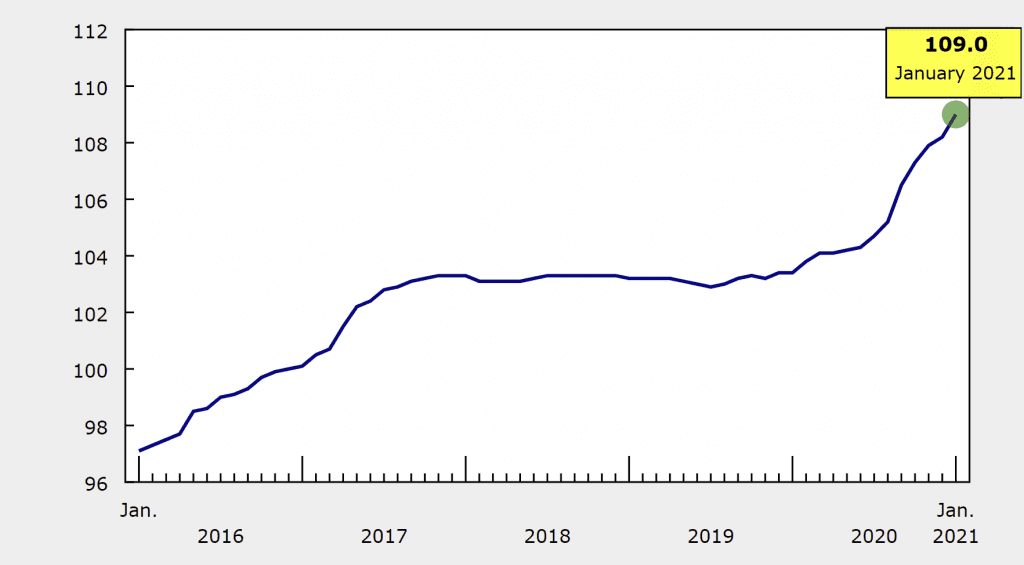 Ottawa, ON—The cost of a new home rose at its fastest pace since last October, increasing 0.7 per cent nationally in January. Prices were up in 22 of the 27 census metropolitan areas (CMAs) surveyed and were unchanged in the other five CMAs, reports Statistics Canada.

For the ninth consecutive month, the national index was up, which was linked primarily to the decreasing supply of new homes and continued high demand. This was largely driven by lower borrowing costs and consumer desire for more living space during the pandemic.

Completed single-family homes still available for sale in December were down by close to one-third compared with December 2019. The largest price movements in January were in Hamilton, Ont., and Charlottetown, P.E.I., with builders attributing the increase mainly to higher construction costs. The rise in new housing prices reported in Kitchener-Cambridge-Waterloo, Ont. resulted primarily from a shortage of developed land in the area.

Nationally, new house prices rose 5.4 per cent year over year—the largest increase in over a decade (since March 2008).

Ottawa, Ont., once again led the increase in new house prices, which it has done for almost three years. In Kitchener-Cambridge-Waterloo, new home prices surged as a result of their relative affordability compared with homes in Toronto, coupled with a strong demand for single-family homes.

According to property assessment values, for all property types, the value of Toronto homes was on average $340,000 higher than for homes in Kitchener-Cambridge-Waterloo and $270,000 higher than Hamilton. Both of these regions outside Toronto have a strong housing market and attract out-of-town buyers.

Regina reported the only year-over-year decline in January. However, the decrease has been slowing in this city since the record 4.8 per cent drop in July 2020.