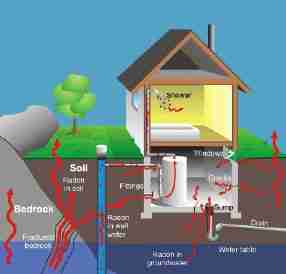 The only way to know if a building has a high radon level is to measure the radon concentration using a long-term test. Graphic courtesy of the Geological Survey of Canada.

A new standard looks after radon control options for new construction in low-rise residential buildings. Standard CAN/CGSB 149.11-2019 has now been published and approved by the Standards Council of Canada.

This is the first edition of the new standard and does not apply to radon control measures that have been installed prior to December 2019.

Radon is a naturally radioactive element that is present in rocks and soil. When uranium decays, it produces radium, which in turn decays to radon – a radioactive colourless and odourless gas. A Health Canada study in 2011 concluded that there are no areas in Canada that are radon free. “The level of radon in a completed home cannot be predicted; hence all homeowners need to test their homes for radon, ideally by conducting a long-term test during the first heating season after the completion of the home,” per the introduction of the standard.

The purpose of the standard is to provide technical recommendations for radon control measures in new low-rise residential buildings. The recommendations are intended for use by a contractor or management team where at least one person on-site is specifically trained in radon reduction technology. There are three levels of protection from radon ingress in the standard:

The first level promotes the future addition of a full passive or active system if the home tests high after occupancy. A rough-in for active soil depressurization is used in level one radon reduction systems. A pipe extends into a soil gas collection plenum in the gas-permeable layer under the foundation floor, which acts as an entry point for radon and other soil gases. The pipe then terminates just above the slab and is capped.

This system is only a rough-in and forms the base for either a level two or three mitigation system. Level one will also include a membrane installed underneath the concrete slab, which is sealed to the foundation in order to minimize radon ingress.

It is also important that the continuity of the air barrier be maintained in the basement, including sump pit covers, floor drains, other slab service pipe penetrations and by caulking any cracks and joints in the foundation.

Level two is for full passive radon reduction systems which uses a stack that runs vertically up through the building envelope and exhausts above the roofline. The system will also intermittently reduce indoor radon levels due to the stack effect and does not require electrical power.

A level two system will typically reduce radon levels by 50 per cent, states the standard document. It extends the pipe from level one up through the interior of the building vertically to terminate outdoors. The system relies on naturally occurring pressure differentials to mitigate radon.

Level three is the most effective radon reduction system, often reducing high radon levels in homes by 90 per cent or more, but it requires a fan that operates continuously. This standard describes reducing radon in new construction where the radon in the air originates in the soil surrounding and beneath the home.

This level uses the pipe from level two and also includes a low wattage radon fan. The fan induces a pressure difference to exhaust soil gases and radon from under the slab.

The health risks associated with radon include an increased risk of developing lung cancer. The risk is based on the level of radon and how long the person is exposed to those levels. For more information or to view the standard, please visit http://publications.gc.ca/collections/collection_2019/ongc-cgsb/P29-149-011-2019-eng.pdf.