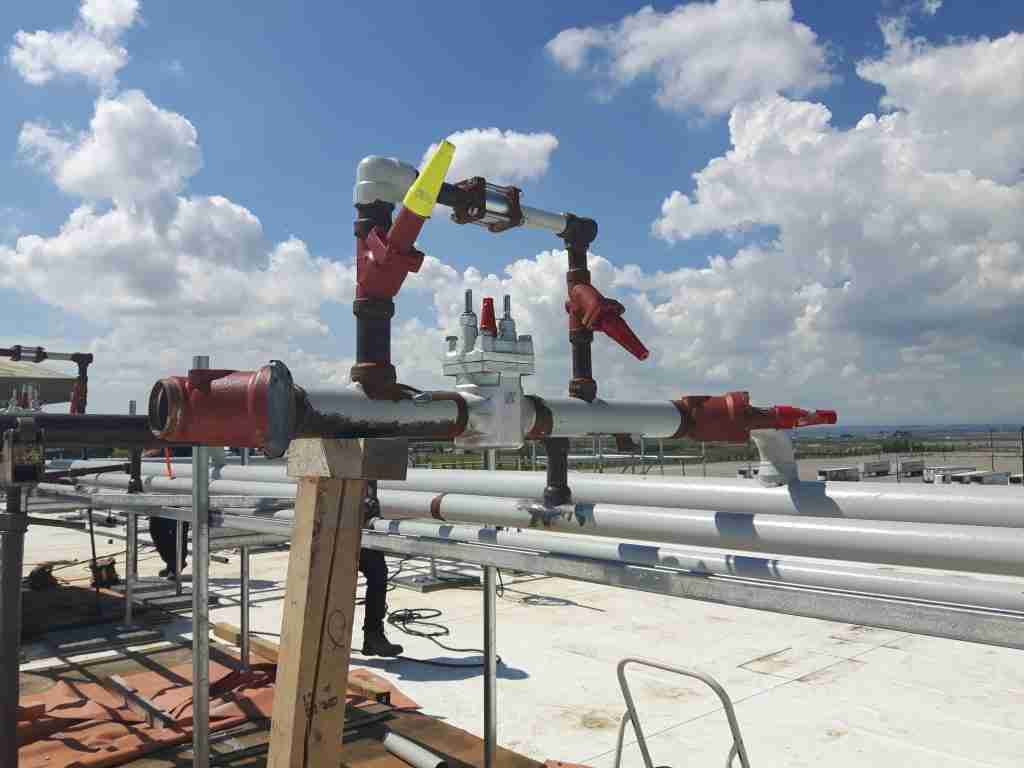 In a new system or repair/renovation, joints are left unpainted until the pressure test is completed.

Pneumatic pressure testing is done on refrigeration systems and equipment in the factory where they are manufactured when they are installed and any time in their life that the refrigerant piping is opened.  Which means it’s done a lot.

In the field, hydrostatic pressure testing of refrigeration systems is not possible since moisture is very detrimental to system operation and efficiency.  It is hard enough to remove the moisture that gets in our systems from the air during an installation, never mind purposely putting water in the piping to test it.

Notwithstanding this fact, I have had two occasions in my life where a code official has been fairly adamant that pneumatic testing was not allowed. Currently, in Alberta, you must provide a letter to the authority outlining your test procedure and the reason a pneumatic test is required.

Why is it dangerous?

When a gas is compressed, all of the energy used to compress it (minus some losses like friction) is stored in the piping system. This can be a large amount of energy and in the event of a rupture or large failure, this energy can be released very quickly.

This re-expansion differs from what happens in a refrigeration leak somewhat because refrigerant leaks have a self-arresting quality. When refrigerant is released rapidly, the liquid evaporates quickly and cools the remaining liquid, which lowers the pressure in the system. This is not meant to imply that ruptures of a refrigeration system aren’t dangerous, but that special care should be taken when we are doing pneumatic testing.

There are two types of risks to consider and both are well defined in the American Society of Mechanical Engineers (ASME) PCC-2 Repair of Pressure Piping Equipment standard. There could be a blast caused by the rapid expansion of the gas and there could be fragments of material that are thrown as a result of the failure.

PCC-2 provides methods to calculate the blast and fragment throw radius distances, as shown in Fig. 1. 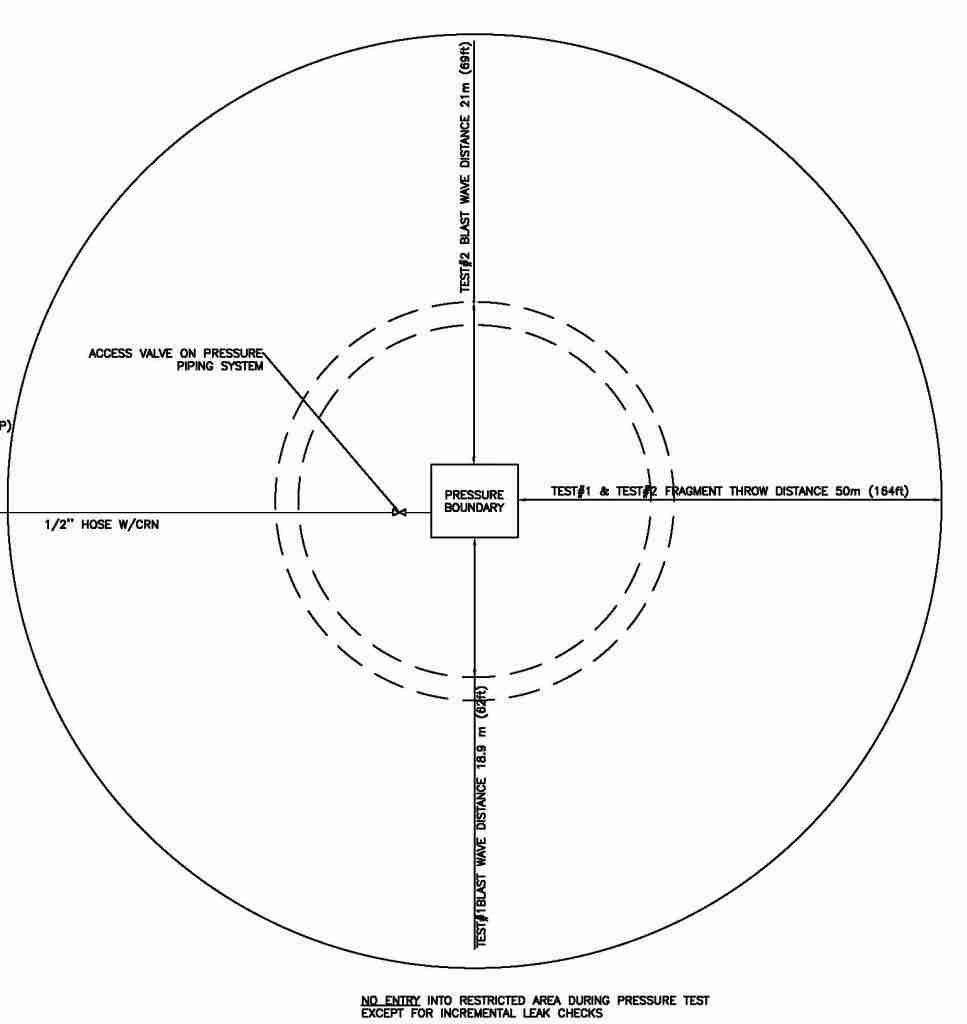 Other methods are available as well. The risk area is then kept evacuated during a pressure test to prevent injuring anyone.  Two problems arise:  First, the distances can be large on big systems (We’ve had to close roads!) and evacuations are a nuisance. Second, how do you find the leak if you can’t go near the system?

Pressure testing is usually done with dry nitrogen or another inert gas. Air is sometimes used on large systems, particularly ammonia systems when the moisture concerns are not as salient. However, for halocarbons and CO2 systems where it is critical to minimize moisture content in the system, the air is not a good choice.

There is a lot of debate about the length of time to leave a pressure test. ASME B31.5, the main refrigerant pressure piping standard, only requires 15 minutes at 10 percent above design pressure. CSA B52, Canada’s refrigeration safety code, requires two hours at design pressure. It is true that the longer the pressure test, the more likely it is to find small leaks. However, it is also true that the longer you leave a pressure test, the more likely you are to be misled by any small changes.

There is a myth that nitrogen pressure during a pressure test isn’t influenced by external factors. This is simply not true. Nitrogen is affected by temperature just like other gases. It may not be significant, but consider that this will often change.

Fig. 2 illustrates this point by showing how the pressure of nitrogen is affected by temperature in a fixed volume. Given an initial test pressure of 300 psig at 75°F, the pressure would fall to approximately 280psig at 40 degrees F. 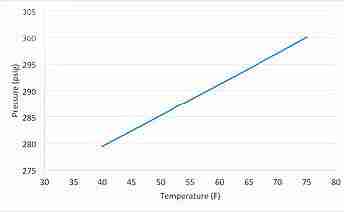 Fig. 2: The change in test pressure as the temperature changes.

This change is obviously not insignificant.  However, you can use the ideal gas law to estimate or predict what the change will be and since the volume doesn’t change, you can use the simplified version of the law below.

While doing this can definitely help, I can attest to the fact it’s not always that easy to figure out what the temperature really is. For a small system, it can be done. But think about a large complicated piping network where some piping is out in the sun, some are in a heated building, some in a freezer, and some in unconditioned space. What is the temperature?

With the understanding now that these pressure tests have limitations, particularly trying to use small pressure changes to deduce a leak, the question becomes: how long of a test is long enough?

There is a real risk in invalidating the test if you left the test for a long period of time. I used to recommend a long pressure test, but I’ve changed my approach somewhat over the last several years and while 15 minutes may be too short in some cases, it is usually sufficient to find a leak.  The two-hour pressure test required for CSA B52 can be used to complete the mandatory leak checking (below).

There is a caveat to the last statement, so before you get too excited that you can rush through a pressure test, recall that the 15-minute pressure test must be at 110 to 120 percent of design pressure.  For R410A refrigerant, this means the test needs to be at almost 500 psig. The higher pressure means that relief devices and some components need to be removed and then reinstalled on the system after the test is complete. 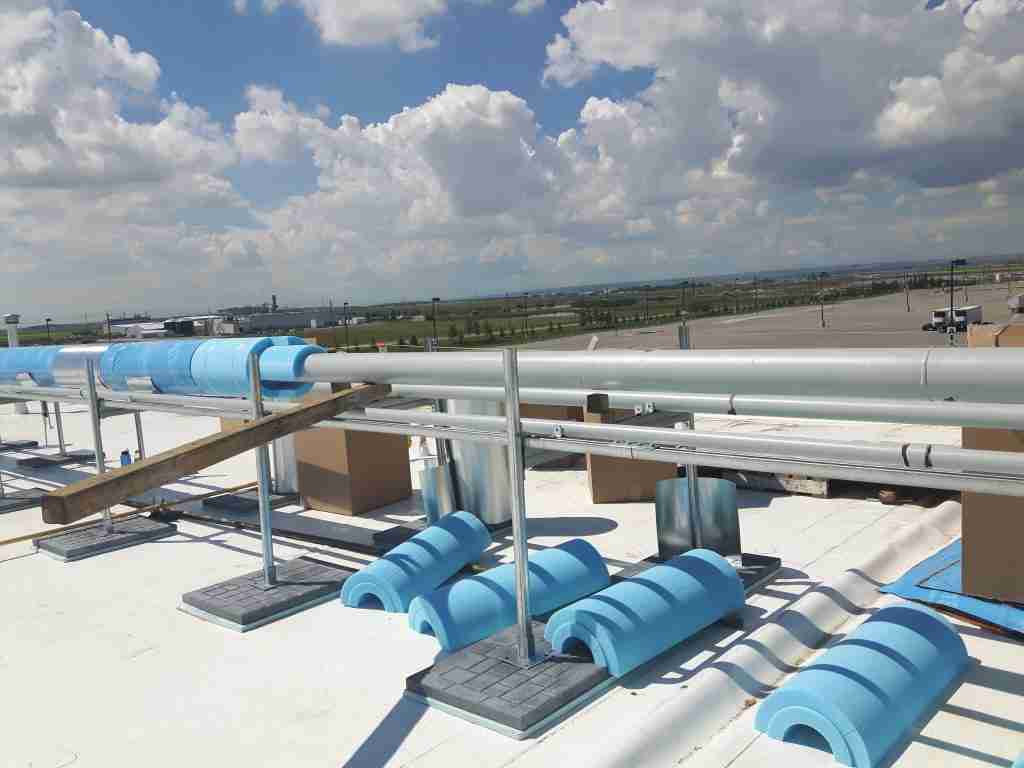 On this project, the piping is being insulated after completion of the pressure test.

The other requirement in ASME B31.5 is for a leak test, which is distinctly different from a pressure test. A leak test can be a soap test or the use of a leak detector with a tracer gas in the nitrogen. Every joint on the system must be checked, which means that insulation cannot be 100 percent completed until after the tests.

A final point of interest applies to piping networks and vessels being pressure tested in the winter, particularly those that use steel (almost every pressure vessel). If the ambient temperature is below the minimum design metal temperature (MDMT) of the steel, it should not be under design pressure. In some cases, this means there is a necessity to hoard and heat piping for testing.  If you recall a similar discussion in an article a long time ago, this heating is necessary to have an effective evacuation as well.

There is a lot to think about when doing pneumatic pressure tests, more than most of us were ever taught in school!