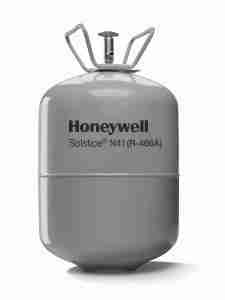 Solstice N41 – R-466A – is the first A1, non-flammable, reduced global warming potential (GWP), R-410A replacement refrigerant developed for stationary air conditioning systems, reports Honeywell. It will be commercially available in 2020. A1 refrigerants are considered among the safest refrigerants with low toxicity and zero flammability

“We developed Solstice N41 to address the many regulatory and safety challenges facing the industry,” said George Koutsaftes, Honeywell Advanced Materials president. “This product is the first non-flammable refrigerant developed as an R-410A alternative, and is also better for the environment, energy-efficient, and cost-effective for the end-user with minimal conversion required.”

“The current industry standard refrigerant, R-410A, which was developed and brought to market by Honeywell, must be replaced with an energy-efficient, lower-GWP solution with similar or better performance,” reports Honeywell.

It is being tested by over 15 OEMs and leading compressor manufacturers, having accumulated more than 30,000 hours of testing in different applications such as commercial AC (VRF, rooftops) and residential AC (unitary).