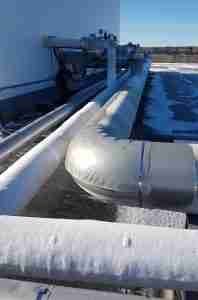 Failed insulation is indicated by significant frost build-up on the freezer piping.

Refrigerant piping is obviously a very important component of refrigeration systems. We have discussed some of the issues and challenges regarding piping in previous articles and will drill into a few more topics here.

For most refrigeration mechanics and technicians, ACR copper tubing is the only piping material encountered. Industrial and ammonia mechanics are familiar with carbon and stainless steel since ammonia reacts with copper, making it an unsuitable material to use. As CO2 systems become more popular and as our industry continues to acknowledge the seriousness of leaks, from an environmental perspective with Halocarbons and from a safety perspective with ammonia, reducing failures is becoming more important.

One of the ways that we make sure piping is safe is by following engineering and design standards and codes. In Canada, CSA B52 is usually the code that is used for mechanical refrigeration installations. However, CSA B52 requires that refrigerant piping installations comply with a different code, ASME B31.5.

It is important to note that in many (if not all) jurisdictions in Canada CSA B52 is not a legal requirement for small systems, usually under three tons, and even though it can be used for residential type equipment, its scope specifically excludes single system air conditioning for private dwellings.

ASME B31.5, first published in the early 1960s, is part of a series of piping codes produced by the American Society of Mechanical Engineers (ASME) that detail the design; fabrication and assembly; and examination, inspection, and testing of refrigeration piping and heat transfer components. This code is the main standard used in our industry to determine the design requirements for refrigerant piping. The following list is a sample of the types of requirements outlined in B31.5:

Some of these items, like thermal expansion, are discussed regularly. But I suspect there are some things in this list that many piping designers in our industry haven’t spent too much time thinking about. 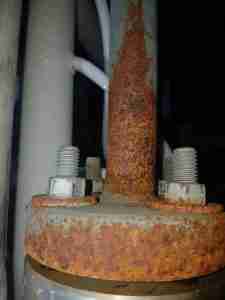 Corrosion starting where the paint coating has failed on this carbon steel piping.

When was the last time you wondered if your piping and joining methods were actually rated to withstand the vacuum we put on it during an evacuation? Or if the -40°C winter is cold enough for our materials to be susceptible to brittle fracture?

I have seen serious piping failures that occurred as a result of wind and I know that the requirements of B31.5 design are not regularly verified for refrigeration installations.

This is a somewhat contentious topic that is hotly debated. Even though it is likely that stress analysis of at least some level is required in most piping systems, particularly those that present a risk like CO2 and ammonia, we typically only do these calculations when required by an authority having jurisdiction. For example, British Columbia requires stress calculations for piping four inches and greater in size.

Another way to reduce failure is to better manage corrosion. In copper piping systems, corrosion is not generally a large concern, but it is very common in larger halocarbon systems and ammonia systems that use carbon steel piping.

While welded steel piping, at least in my experience, has significantly less failures than copper piping over the life of a piping system, it does suffer from external corrosion if the pipe is not effectively coated or protected. Because of the increased attention to piping failures, this situation has led to a frequent discussion comparing the options available for protecting carbon steel pipe that is under insulation and hard to inspect. 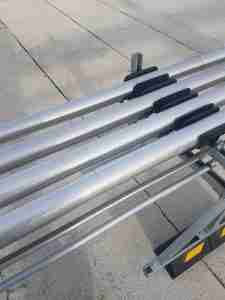 This pipe jacket is installed on halocarbon copper piping.

In many cases, historically, carbon steel piping under insulation was not coated or painted. Currently, painting pipe with an industrial epoxy paint is the minimum recommended coating, but two other options are frequently examined.

The second option is using an anti-corrosion gel on carbon steel; this option has become significantly more popular over the last several years. The installation of the gel itself is relatively easy but most products can’t be installed in cold winter weather, which can really limit the installation window.

Another key component in preventing corrosion on piping is to use effective vapour barriers on pipe insulation systems.  Typical flexible elastomer often fails at compressors and at joints.  While it is possible to install this type of insulation effectively, it is not common, or advised, to use it on steel piping where maintaining the vapour barrier is extremely important. Any vapour barrier failure can cause moisture to accumulate on the piping, which accelerates corrosion.

As we transition through refrigerants again it is important to consider that preventing environmental releases is critical even if it isn’t the intent of ASME B31.5. Consider that some of the new blends being used in systems have Global Warming Potential (GWP) about 1200 times more than CO2 and some of the older refrigerants like R404A have a Global Warming Potential have 4000 times C02. This means that releasing a single pound of R404A is like releasing two tonnes of CO2.

I think it is worth designing piping systems to effectively minimize releases.

Our industry is moving to a reality where we are going to be using several piping materials that include regular ACR copper, copper-iron alloys, carbon steel, and stainless steel.

It is important for us to understand the proper piping and joining design requirements and best design practices in order to protect our piping systems; a lot of this information starts in piping design codes like ASME B31.5.

Following a proper design, it is important for us to educate the operators and owners how to maintain their systems to prevent early failures. This necessarily includes adding thorough piping inspections to preventative maintenance plans and proactively managing potential piping failures.