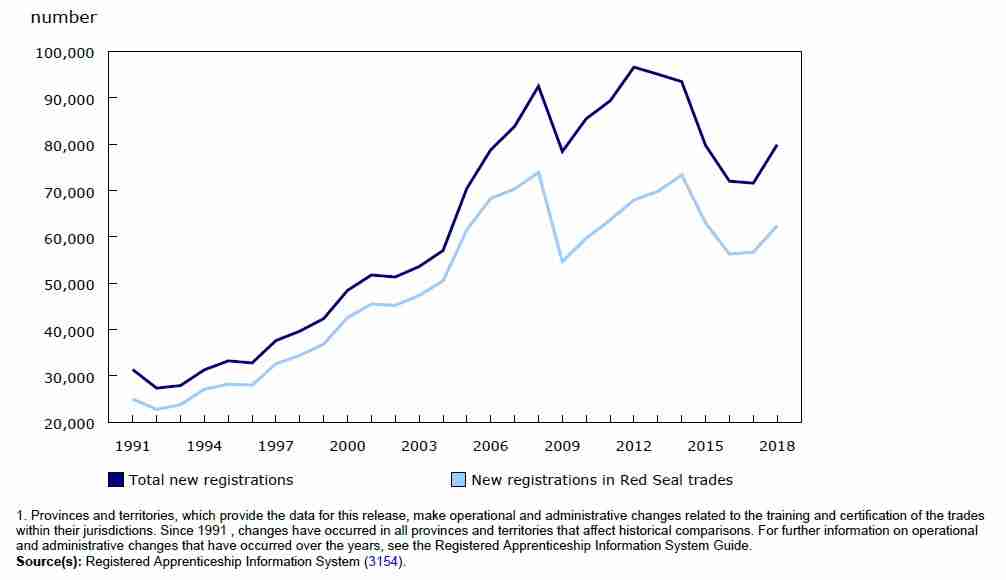 Despite these challenges, more women are enrolling in apprenticeship programs traditionally occupied by men – 2.2 per cent as plumbers, pipefitters and steamfitters. The proportion of women enrolling in these programs has risen by 3.9 percentage points since 2008.

Quebec had the largest growth in new registrations among the provinces with over half. British Columbia, Alberta and Ontario reported notable increases, at 1,490, 1,380, and 1,210 respectively.

“Apprenticeships in Canada are primarily work-based training programs. Success in the trades can be closely linked to the health of local labour markets since apprentices seek to maintain suitable employment to fulfill their on-the-job hours and technical training,” said the report.

New registrations rose for the first time in Alberta since the fall in crude oil prices in 2014. The economic difficulties of the province were also felt by apprentices, whose training opportunities were limited by the number of jobs available during this period. New registrations fell by almost half from 2014 to 2017.

There were also notable declines in Saskatchewan and Newfoundland/Labrador. These three provinces accounted for 60.2 per cent of the national decrease in new registrations during this period.

Following four consecutive years of decrease, the number of certificates granted in the trades rose 6.6 per cent to 54,520 in 2018. Employment grew by 4.2 per cent across Canada from 2016 to 2018, notably in the construction industry, according to the results from the Survey of Employment, Payroll and Hours report.

In Quebec, most of the increase included plumbers, pipefitters and steamfitters.

Among apprentices, most of the increase in certificates came from those with a Red Seal endorsement.