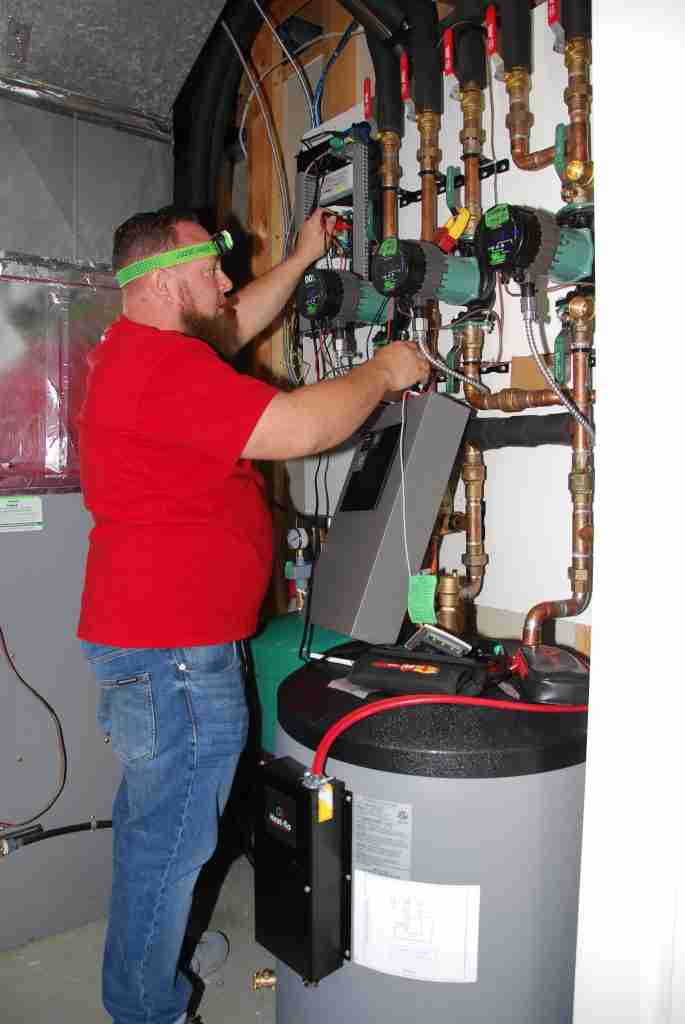 Manufacturer field service specialist Wolf Muench performs checks on the hydronic side of the Taco/Glen Dimplex system. This retrofit installation uses the home’s original forced air furnace as an air handler. The buffer tank can be seen in the foreground.

As governments and environmental realities push the industry away from carbon-producing technologies, air-source heat pumps are showing promise even in cold Northern climates.

Only recently have air-to-water (ATW) heat pumps designed for single-family detached homes come on the market. A Canadian manufacturer, Maritime Geothermal, Petitcodiac, N.B., has manufactured the Nordic brand geothermal heat pumps since 1983 and launched its ATW series in 2015.

Taco Comfort Solutions Canada, Milton, Ont. displayed the German Glen Dimplex air-to-water heat pump at the MCEE Show in Montreal last spring. The company has a number of pilot installations going and expects to launch the product under the Taco brand across Canada in 2020, reported Mike Miller, director of sales, building services. Other ATW products from Europe and Asia are sure to follow. 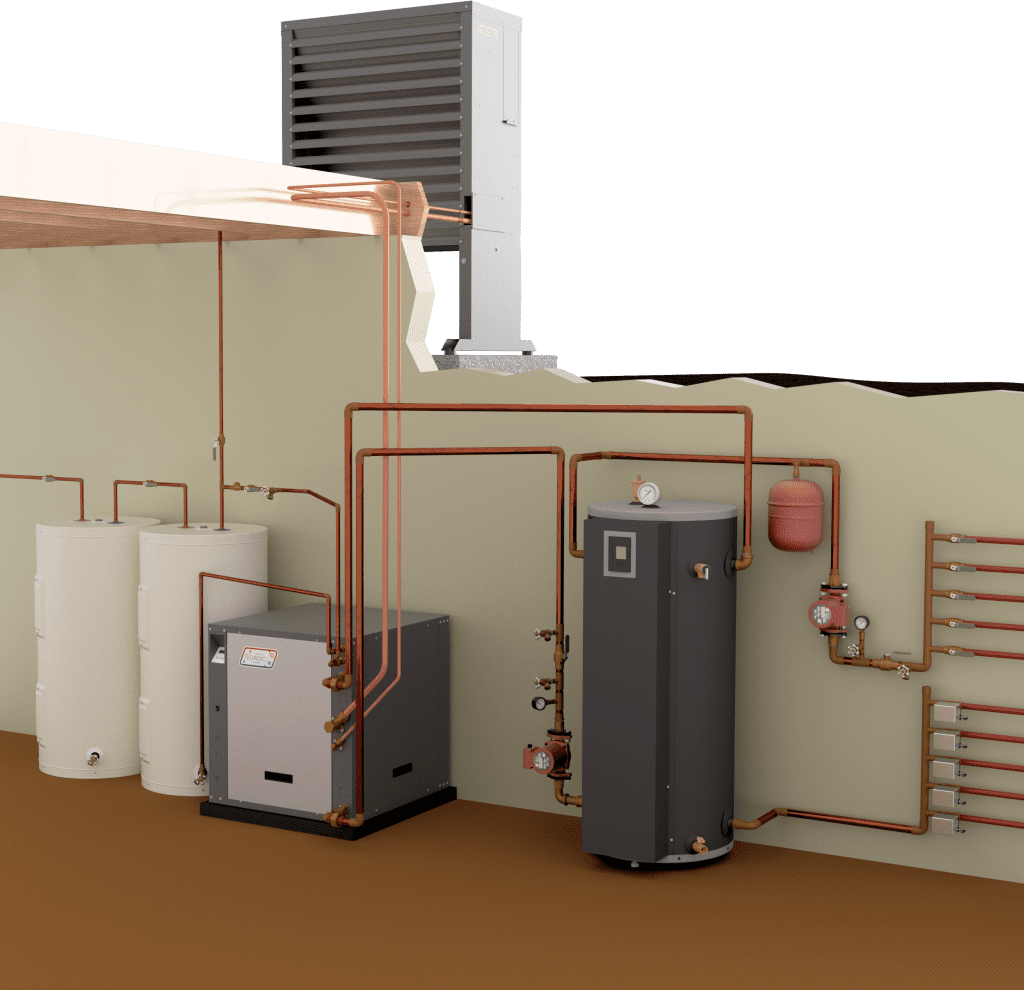 Today, ATW heat pumps can generate a useful amount of heat down to about -20C. Some units are designed to work in even colder temperatures, but the tendency is that as the temperature goes down efficiency drops, and the price and complexity increase.

“In most of Canada, we will need backup heat. The heat pump will operate down to -20C, but loses some capacity,” said Chaters.

An ATW heat pump will provide heated water at up to about 60C or 140F. The system typically consists of the heat pump, a buffer tank, controls and the hydronic system, which is the same as that for a boiler. One advantage of an ATW system is that, unlike an air-to-air heat pump, it is not trying to heat the space. The heat pump’s only role is to keep the buffer tank at a certain temperature set-point. A pump or pumps then distributes hot water to radiant floors, radiators, an air handler, etc.

“It separates the function of the heat pump from the function of the zones. Instead of turning on when a zone calls for heat, the job of the heat pump is to heat the buffer tank to a certain set-point temperature,” explained Dan Rheault, P. Eng., Nordic lead product engineer. The buffer tank typically includes an electric heating element for back up heat.

The heat pump control runs everything up to and including the buffer tank and the backup heat source.

In a retrofit, the existing oil or gas-fired boiler may be kept for backup. A DHW heater could also be used for backup if it is designed and approved for space heating. 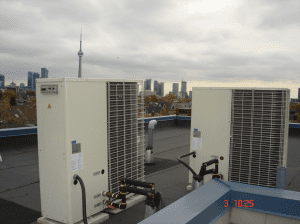 In a typical hydronic system with multiple zones, a separate zone controller may be required in addition to the heat pump control.

If the home currently has a forced-air system with an air conditioning coil, switching over to a heat pump is simply a matter of replacing the AC coil with a hydronic coil, something Miller has done in his own home. The heat pump provides heat in the winter and chilled water for cooling in the summer. The buffer tank element provides backup heat, just as with a hydronic system.

There are two configurations for air-to-water heat pumps. Monobloc units are a packaged system with the compressor and all components in one cabinet and are typically located outside the home with the hot water or glycol piped into the building.

Today’s units run quietly, so the unit can be located close to the building. Piping is run either underground or above ground and heavily insulated.

The other configuration is a split system, with the compressor and heat exchanger in an indoor cabinet connected by refrigerant lines to an outdoor unit consisting of a fan and a coil. It’s very similar to a mini-split air conditioning system. They typically come pre-charged with refrigerant. One advantage is that in a mid-winter service call, all the key components are indoors.

With the Nordic split system, the installer has to connect the lines and vacuum them through a three-way access port, and then open a valve to let the refrigerant into the lines. If the line is longer than 20 feet (up to 70 ft.), the installer adds refrigerant as specified in the manual. Required trade licenses are the same as for air conditioning. A hydronic heating contractor might hire a refrigeration tech just to do the line connection. 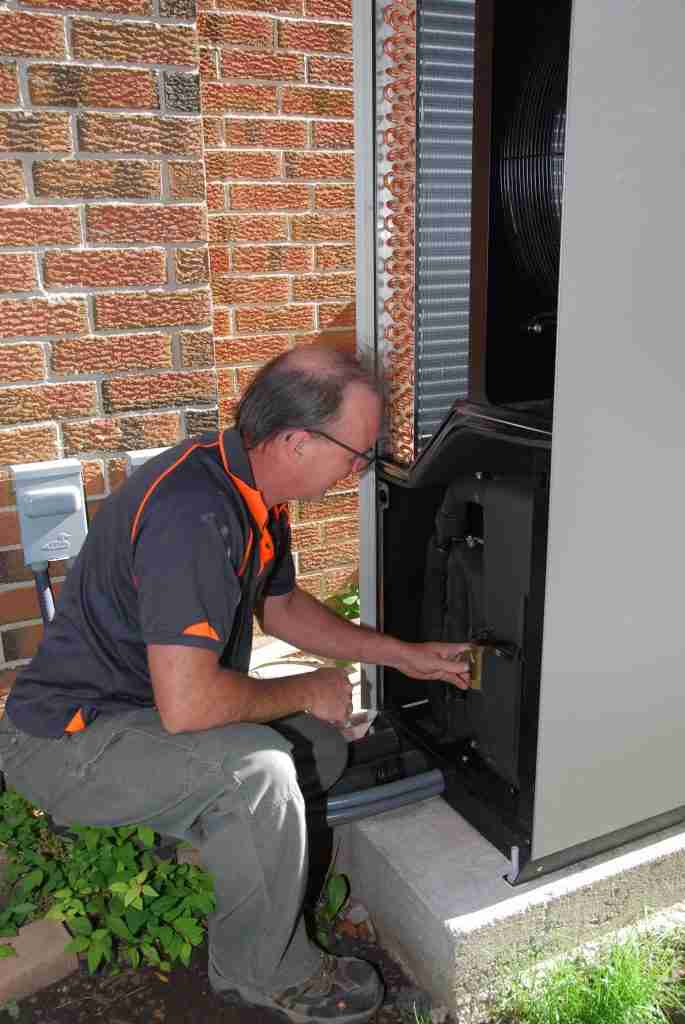 As a stand-alone appliance, the monobloc system doesn’t require a refrigeration license. Manufacturers offer complete packaged systems with everything up to and including the buffer tank. “We are trying to make it easier for the contractor,” said Miller.

The obvious question when sizing a heat pump is that if the heat output dips with the temperature, why not just install a bigger heat pump?

“Sizing a heat pump is always a compromise to cover as much of the coldest day heat load as possible and not having a drastically oversized unit in milder weather, which would result in short-cycling,” said Rheault.

Like any heating system, doing a heat load analysis of the house will allow the contractor to specify the right equipment. “You can match that up with the output of the heat pump at around freezing. It’s a bit arbitrary, but it gives you a good compromise between coldest day output and not oversizing it in warmer weather,” said Rheault.

While the heat pump can heat water up to 65C, it doesn’t make sense to design for that. “We try to design around 48C for efficiency and comfort with fan coils, and lower for radiant,” said Chaters. “The heat pumps can also operate with outdoor reset, allowing the water temperature to go up or down based on ambient temperatures to allow energy savings while providing maximum comfort.”

“You do have to size the backup elements in the buffer tank for the entire heat load of the house because if it gets to lower than -22C outside, then the elements will take over the heating,” added Rheault.

The waterside is the other critical concern. “You need the proper Btu’s for the building, but the largest concern is water volume and flow,” added Chaters. “The pipes must be sized to allow proper flow and the volume of the system must meet the size of the heat pump.”

There should be a filter in the system, which needs to be checked and cleaned annually. 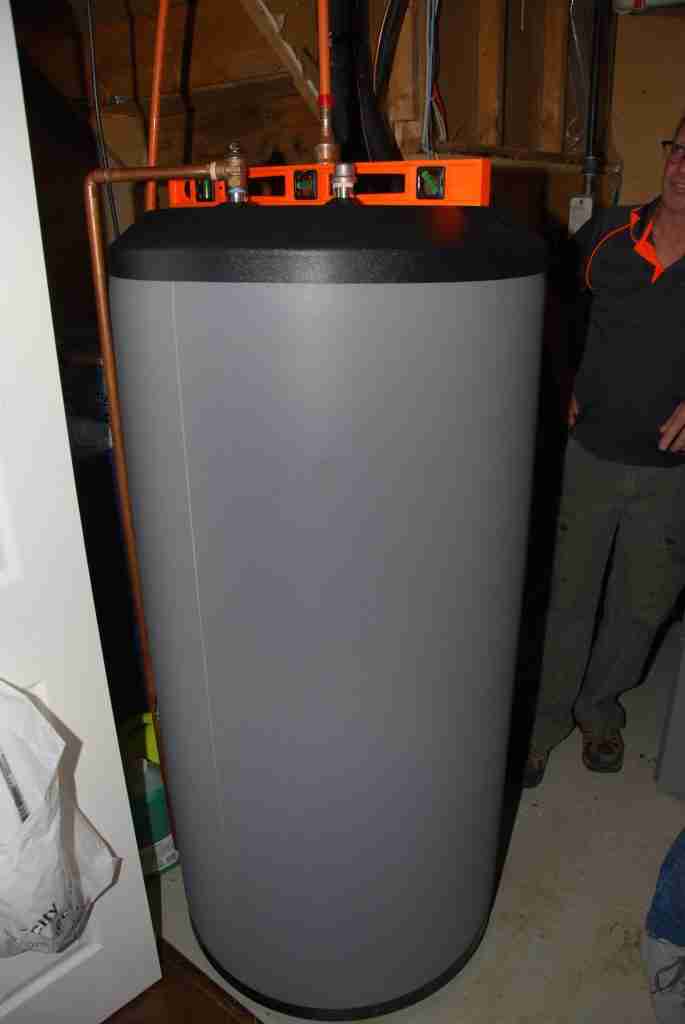 Indirect tanks must have heat exchangers designed to work with the lower temperature water of a heat pump.

DHW with a heat pump

An indirect DHW tank would be set up as one zone and needs to be considered when sizing the heat pump. It would typically be controlled through the heat pump control.

“Standard indirect tanks may not work for heat pump applications due to the low fluid temperature available from it. These are special indirect tanks that require a significantly larger surface area of the internal heat exchanger,” added Miller.

Nordic offers DHW de-superheaters in its ATW heat pumps. A de-superheater pre-heats DHW using discharge gas while in the heating or cooling mode, which typically covers the home’s DHW needs in winter and summer and may need “topping up” in the shoulder seasons when the heat pump is not running as much.

ATW heat pumps require little maintenance – only an occasional inspection to ensure everything is working properly, and most home and building owners don’t even do that, said Rheault.

Heat pumps are becoming more and more prevalent for space and DHW heating as governments set carbon reduction targets. It will pay for any contractor to get up to speed on this technology.