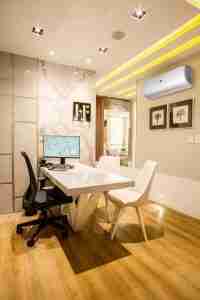 This high wall fan coil, right, looks and operates very similarly to the indoor unit for a mini-split.

As residential air conditioning became popular in Canada, hot water heating fell from favour because it required a separate system. With one appliance for heating and cooling, forced air systems became the norm.

Today that is changing as efficient air-to-water heat pumps come into the market. The technology has become practical for home heating in many regions of this country, with electrical backup. (Geothermal or ground source heat pumps have been used for heating and cooling for years, but that’s an article for another day.)

“The industry is going to get to a place with the new trend towards heat pumps where low-temperature heating or (relatively) high-temperature cooling applications will become more popular,” remarked Mike Miller, director of sales, building services, for Taco Comfort Solutions, Milton, Ont.

“It’s standard with any residentially-sized heat pump, so it would be up to six tons of nominal capacity. In fact, an air-source-heat-pump needs a reversing valve because it needs to be able to go into defrost. There’s no option not to have it because it’s required for heating as well,” remarked Dan Rheault, lead product engineer for Nordic Heat Pumps (Maritime Geothermal), Petitcodiac, N.B.

One job to do

As we reported in the October issue of P&HVAC, in the heating season the air-to-water heat pump has only one job to do and that is to maintain a buffer tank at a set temperature. In the cooling season, it does the same thing except for the heat pump switches over to cooling and maintains the buffer tank at 7C (45F).

“Whenever a zone needs cooling, it will request water from that tank by opening a valve or starting a zone circulation pump,” noted Rheault.

In most hydronic residential cooling systems today, cooling, like heating, is done through hydronic air handlers or fan coils. That may take the form of a central air handler for the entire home or individual air handlers for each room. There are high-wall units that go near the ceiling or console units that go below the window.

An existing furnace can be repurposed as a central air handler by installing a hydronic coil in the plenum for heating and air conditioning. 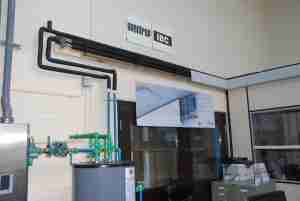 Jaga Canada, Waterloo, Ont., offers a number of innovative radiator and fan coil solutions that do heating and cooling. The company’s Trench Heating and Cooling units, for example, are fan convectors that are embedded into the floor and are ideal for rooms with large windows.

There are also low temperature baseboard radiators that work for cooling as well. It’s a matter of matching the heat pump cooling output to the radiator or fan coil, noted Miller.

“The advantage of radiant panels over fan coils is that there is no air blowing around, and the walls, floors, furniture, etc. are all at the same temperature, so there are fewer hot and cold spots,” noted Chaters. Panels tend to be more efficient, he added.

That can be done easily with a hydronic air handler and some other emitters. “They work very similarly to an air conditioner,” noted Rheault. “They have a chilled coil with air blowing over it so that condensate (humidity) will be removed from the air as it’s being cooled.” 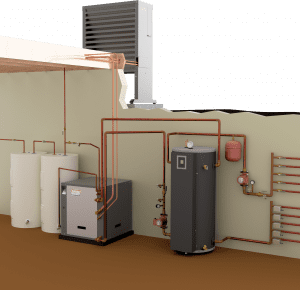 This Nordic Heat Pump schematic shows indoor and outdoor units with the buffer tank and piping, on the right, to air handlers.

Moisture drips off the coil and into a drain pan, and then into a condensate drain, which can either go to a floor drain or to the exterior of the home. It needs a condensate trap and may need a condensate pump.

Like any system, controls for a residential hydronic cooling/heating system can be simple or more complicated but more precise.

The built-in heat pump control will maintain the buffer tank temperature. If the entire home is one zone, as with a central air handler, it could be controlled by a simple heat/cool thermostat that turns the fancoil and pump on and off, maintaining the 7C water temperature.

However, where the home is zoned by floor or by room, a zone controller would be used with individual thermostats in each zone. It controls the operation of valves and pumps to deliver the right amount of chilled water to each zone.

A zoned system could also be controlled with multiple thermostats wired together with relays, “if the contractor likes to mess around with relays,” added Rheault. Not many do these days.

Installation of an air-to-water heat pump is fairly straightforward for most HVAC contractors. Manufacturers supply detailed instructions, offer training and are a phone call away for help.

Doing a heat loss/gain calculation for each zone will go a long way to ensuring the system is sized properly, noted Chaters.

These systems can be assembled from components, but packaged systems with major components from one manufacturer make the installation easier.

The buffer tanks are specialized in that they have an electric element for backup in heating as accessories. Things like pumps, zone valves, air handlers and hydronic coils are the same as those used in hydronic heating. 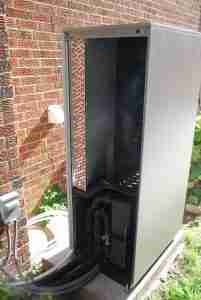 These systems require little maintenance. Typically, the homeowner would clean or change filters in the air handler. It’s up to the installing contractor to make sure that they know how to do that. Some may prefer to have their contractor do it.

Whenever one talks about hydronic cooling, the question always arises that if the customer already has radiant floor heating, can that system also be used for cooling? The short answer is yes, but it’s more complicated.

“The drawback with radiant cooling (using a radiant floor or wall, for example) is that you wouldn’t get any dehumidification,” noted Rheault. As a result, the floor temperature has to be kept above the dew point to prevent condensation from forming on the floor. And before one thinks that radiant floor cooling means cold floors, the temperature would typically be maintained at about 67F surface temperature, noted Miller.

“There are currently many radiant panel manufacturers that also use a higher water temperatures at around dew point and add special controls and dehumidification units in order to avoid sweating or dripping ceilings. The floors and panels work well when controlled properly,” said Chaters.

Typically, a radiant cooling system would be used to cover the base cooling load, said Miller. A dehumidifier, an energy recovery ventilator (ERV) or some other device would provide additional dehumidification.

However, a lot depends on the customer, added Rheault. “I think the best place to do radiant cooling is where a homeowner isn’t fussy about maintaining a particular temperature; where they just want a little cooling but are not trying to maintain a constant setpoint.”

One appliance for heating and cooling continues to have a lot of appeal. The development of air-to-water heat pumps that work in the Canadian climate gives HVAC contractors one more option to offer their customers.