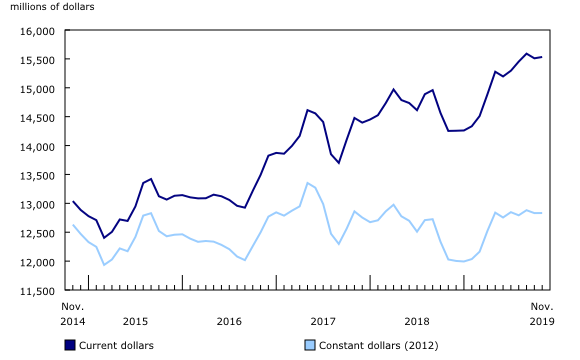 There was a small increase in total investment in building construction for November. Up from October, investment increased 0.1 per cent to $15.5 billion.

In the non-residential sector, investment rose 0.8 per cent to $5 billion in November. The commercial industry increased 1.4 per cent to $2.9 billion, led by Ontario (with 2.8 per cent increase to $1.1 billion) and Quebec (with 3.2 per cent increase to $578.7 million). Offsetting the national growth, British Columbia reports its first decline in commercial investment since May 2018 with a two per cent decline to $533 million.

Investment in the institutional market edged down 0.2 per cent to $1.1 billion, largely due to Alberta which declined 2.7 per cent to $158.5 million. This was the twentieth consecutive monthly decrease in institutional building construction for the province.

In Manitoba, a new $60 million addition to Red River College, Winnipeg, Manitoba, led to the largest provincial gain, increasing 12.5 per cent to $38 million. Nationally, the industrial market rose 0.4 per cent compared with the previous month. Growth in Ontario more than offset the declines reported in six provinces (2 per cent to $394.3 million).