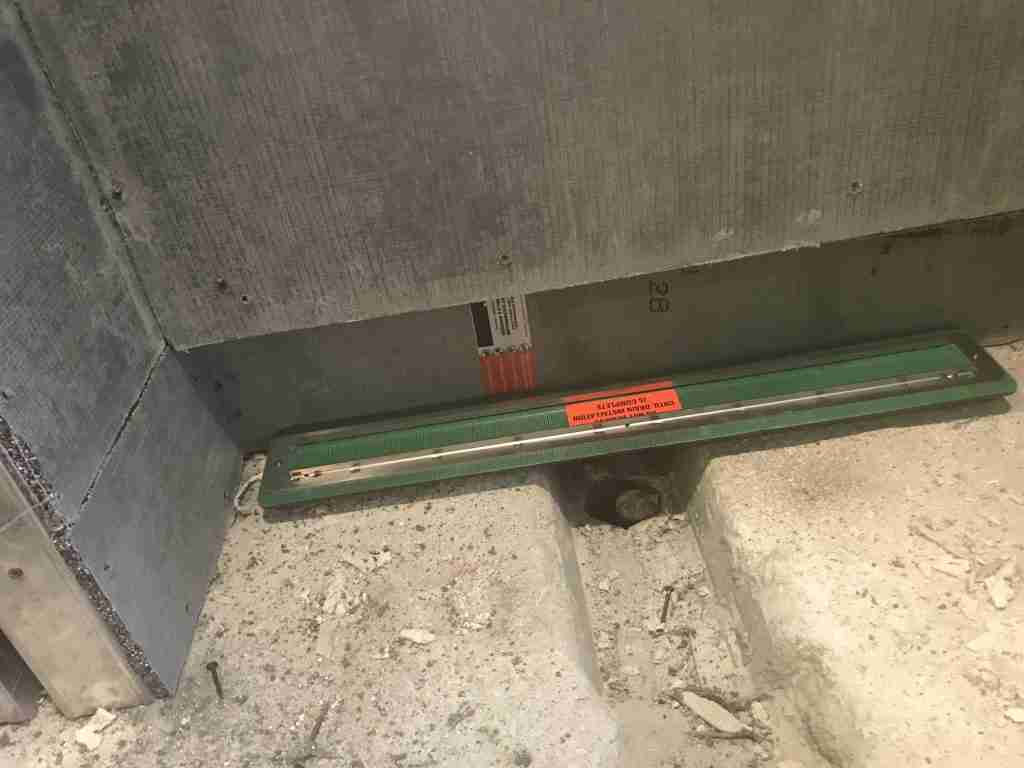 QuickDrain conducted on-site, model-room training before the start of the project, performing a full installation to support contractors.

Opened in 1982, the Four Seasons Houston is now in the latter stages of upgrading 404 guest bathrooms to transform the iconic downtown hotel, as part of a multi-year renovation project.

According to project assistant superintendent, John Upshaw of Turner Construction, converting 404 bathtubs to step-in showers in a building constructed in the ‘80s, is no small feat.

The construction team has encountered numerous job-site irregularities, with some bathrooms having more than one layer of drywall in the shower enclosure, altering the dimensions of the enclosure. Meanwhile, other bathrooms were missing cement boards, resulting in damage behind the walls.

“When we demo out a tub, we’re essentially running into different conditions in 404 different bathrooms,” Upshaw explains. “You just don’t know what you’re going to run into.”

So, the team had to find a solution that would allow them to adapt to unexpected plumbing rough-in configurations and various shower-enclosure sizes. A product that would speed installation would be the ultimate find for a large project like this one.

Which is exactly what the hotel’s architecture and design firm expected to accomplish when they specified QuickDrain USA’s tub-to-shower conversion kits for the project. 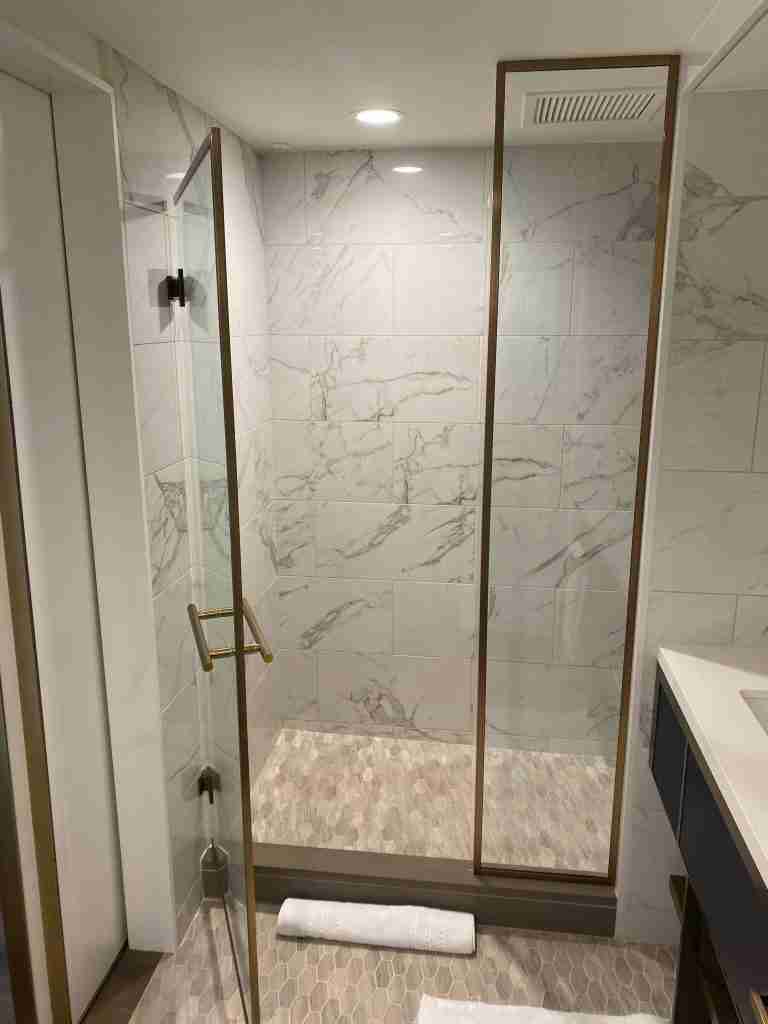 QuickDrain’s tub-to-shower conversion kits include an integrated PVC drain body, combined with a pre-sloped PET shower pan and waterproofing sheet membrane. ShowerLine, used for the Four Seasons Houston project, is a high-quality PVC linear drain system and features a fully sloped trough where water exits through either a vertical or a side waste outlet.

Made of extruded rigid PET (polyethylene terephthalate) plastic foam, QuickDrain’s pre-sloped shower panels can be easily cut and pieced together without costly customization, eliminating the time and labour to float the typical pitched concrete shower base.

“The flexibility of the PET pan is a big advantage,” says Upshaw, “especially given the irregularities we run into after removing the tubs.”

According to plumber Larry Adams, from Kilgore Industries in Houston, the flexibility of the linear drain system was critical, due to the original construction of the building.

“They were old cast iron tubs, so the drains were set at different positions and often off-centre,” explains Adams, who was the foreman apprentice during the original construction of the building in the 1980s. But jack-hammering or core-drilling through the concrete to adjust drain positioning wasn’t an option. Since the hotel is constructed via post-tensioned slabs, core-drilling would compromise the building’s integrity.

To allow enough room to stub out the existing DWV (drain, waste and vent) lines, which were made of copper, Turner Construction had to chip out the concrete surrounding the existing pipe.

“We had a scanning company come out to determine where the rebar was in the slab,” explains Upshaw. “Fortunately, we were able to find a location between the rebar to chip a small area around the drain.”

In addition, there was no way to solder the existing copper pipe to a new copper joint because of jagged pieces of metal coming through the concrete and less than half a hand space. Adams had to use a mechanical fastening coupling between the copper and the transition material. Thanks to the PET shower pans’ flexibility, the construction crew was able to cut the drain support panel in half to allow Adams to make the mechanical connection.

Furthermore, the QuickDrain system eliminated the need to knock down and reframe walls. According to Upshaw, the fact that they can cut the PET pans on-site to adjust to practically any condition, saves much needed time and labour costs for a renovation project of this magnitude.

QuickDrain conducted on-site, model room training before the start of the project, performing a full installation to support Turner and Kilgore, as well as the tile subcontractor. The training was essential because it provided the tile-setting crew with a solid grasp of how the QuickDrain system works.

“Gulf Coast Flooring is installing the PET pans and tile in all of the bathrooms,” says Upshaw, “so they had to fully understand the process.”

Upshaw believes Kilgore benefited the most from the training because they were able to determine which tools they would need to perform the job. “We were able to knock out any kinks and learn our lessons on what we can do better,” he says. “After that training, Kilgore hit the ground running.”

Tile contractor Jaime Rosa, of Gulf Coast Flooring, says each crew member completes an average five showers per day at the Four Seasons Houston project. “It takes less time than a conventional mud bed, and that translates into cost-savings for us and the hotel.”

Upshaw says he likes the QuickDrain system. “I’ve actually been thinking of putting it in my own home, and we will use it again for similar commercial projects.” 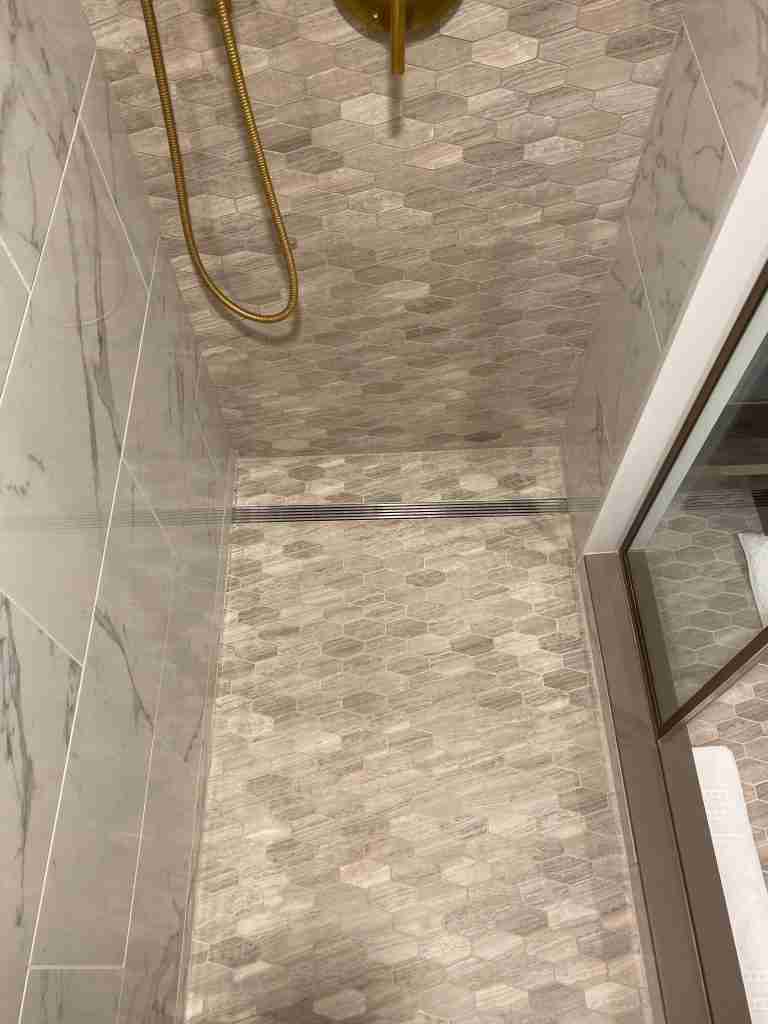