Gas-fuelled appliances may be on the way out. What will take their place? 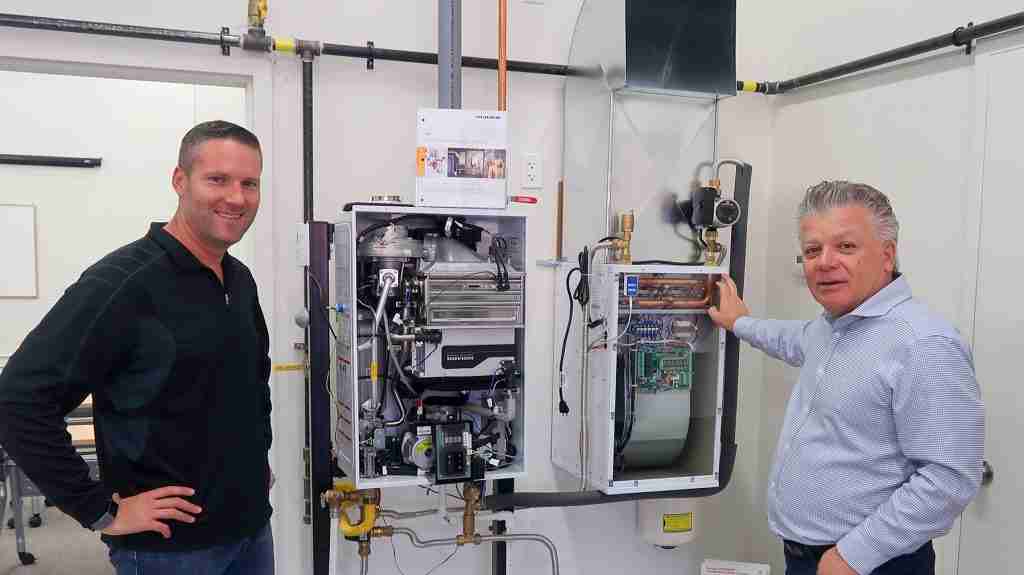 Up until about a decade ago green buildings were like exotic animals in a zoo. Everyone knew about them, but few had ever seen them in person. And they were kind of scary.

Since then, as the effects of climate change accelerated, clean energy and its value proposition began to attract more interest and the outcome of that interest, similar to making regular visits to the zoo, was that after a while the idea of building green didn’t seem so scary.

Green buildings offer governments a pocketbook issue, with a healthy air COVID-19 bonus thrown in for good measure. With bellwether guidelines such as the B.C. Energy Step Code and the Toronto Green Standard promoting sustainable building design, the question is not if, but when will there be a wholesale shift away from gas-fired furnaces, stoves and water heaters.

Modern engineers may think they know what will take their place, but it’s still evolving.

“I think we’re going to see more innovation in mechanical equipment in the next decade than we’ve seen in the last 50 years,” says Monte Paulsen of RDH Building Science in Vancouver. Paulsen has worked on more than 70 low-carbon building projects. Every= Wednesday evening he and 200 to 300 other passive house and zero energy advocates gather virtually for what he calls “Happy Hour.”

It usually stretches over two hours and has to be weekly because of the sheer volume of best practice sharing—mechanical system innovations, architecture solutions—and metrics tossed around on how the latest heat pump, ERV or combination unit has been performing. This is what industry disruption looks like. 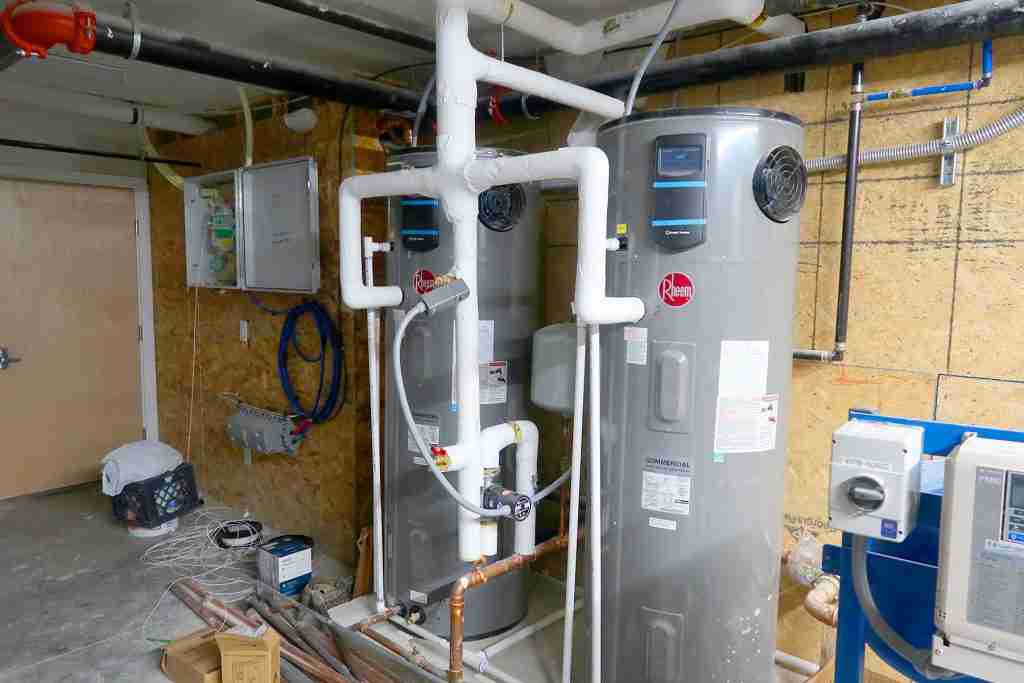 The importance of water heating

Although for years green buildings were all about HVAC and energy savings, that’s changing. We’ve already learned a lot about tighter, better insulated building envelopes.

“It’s relatively easy to solve for ventilation, heating, cooling, and cooking with electricity,” says transplanted Torontonian Tim McDonald, a principal at design-build firm Onion Flats in Philadelphia. “The difficult one is hot water.  After heating and cooling, hot water is the greatest energy consumer in multi-family buildings.”

After about a dozen low-carbon mid rise projects, Onion Flats now builds nearly exclusively to the passive house standard, which places upward limits on kilowatt hours used. “For hot water, the temperatures are higher than modern space heating. And we don’t use gas. That’s why we need help from our hot water guru.”

That would be Gary Klein, a consulting engineer from Rancho Cordova, California. “In multi-family projects you can do domestic three ways,” he says. “You can put one heater in each apartment, you can use a central boiler for all the units, or you can have some apartments sharing water heaters. Sharing can work great in the mid-rise category, but you need room in the mechanical room and short in-unit distances.” 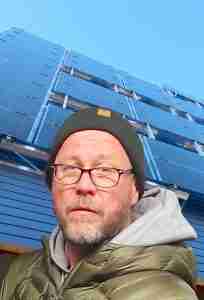 Tim McDonald, principal at Onion Flats, photographed in front of the Front Flats development in Philadelphia.

McDonald explains using his company’s Front Flats project as an example. “Gary showed us how to decentralize the hot water with off-the-shelf heat pump water heaters (HPWHs) and reduced the piping, the insulation, and heat loss each by 50 per cent.” This was accomplished by positioning several pairs of HPWHs in different parts of the mechanical room, directly below the kitchens, with each heater serving six apartments.

Then they took it a step further. Because the recirculation line would be supplying fixtures all the way up, with the furthest being five floors above the heat source, Klein says Viega pipe-in-pipe fittings were used. With the supply line insulating the recirculation line, the project’s heat loss and insulation were cut in half again.

Paulsen has used HPWHs for several projects in British Columbia, including a 19-unit residence in the Town of Smithers. The building has been super-insulated. HRV’s provide the ventilation heat recovery and Sanden CO2 heat pumps provide the primary source of hot water, with electrical backup.

“CO2 is super environmentally friendly, more efficient than other systems, relatively affordable, and the devices can be ganged together easily,” says Paulsen. “We would love to have a larger CO2 HPWH. It’s the number one thing that’s missing. Mayekawa and Mitsubishi make them for other markets but not North America, possibly due to the challenge of climate zones and regional requirements.”

A few years ago, an NRCan study reported heat pump water heaters used only about one third as much energy as conventional water heaters. At that time annual growth had begun hitting double digits. The boom has continued with more people at home during the COVID-19 pandemic.

The company recently launched its fifth-generation unit, which has a coefficient of performance (COP) of approximately 4.0, and automatic shutoff. It’s WiFi capable and  uses R410A refrigerant. 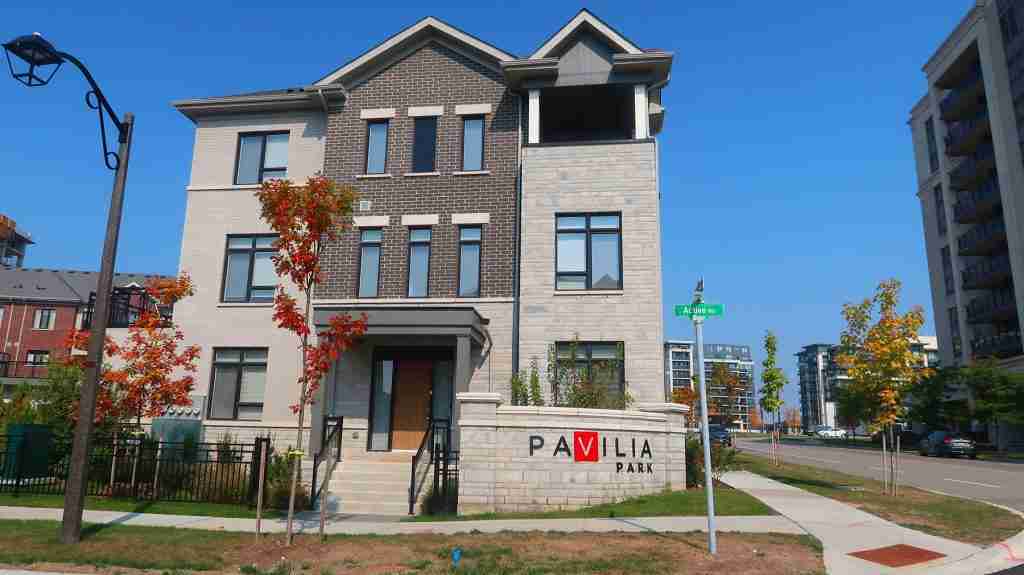 Tankless is booming too

Tankless water heater sales are also ahead of last year, explains Muzyka, now that there is more hand washing. Tankless units fit in lobbies, offices, schools and retail settings. Tankless has also found niche applications, such as airport bathrooms where it works with space constraints and unusual layouts. “Or wherever you only occasionally need a large volume of hot water, like in school or arena shower room,” he adds.

Builders like the solution because it doesn’t take up a great deal of space and offers tankless and Energy Star level efficiencies. It’s also an easy install, with one ventilation perforation, one gas line and one condensate line. “I have projects just like this all over Ontario,” says Marrano, describing townhouses of several hundred units in Stouffville, Brampton, Milton and Mississauga.

Paulsen says his friends at Happy Hour are hoping someone will soon build a single unit with a small footprint that does domestic hot water, space heating, cooling, ventilation and heat recovery. “That person will become a zillionaire.”

Today’s equipment, while much better than it was, still will continue to change over the next decade. The R410A refrigerant in the Rheem unit will soon be phased out, and although most cities are not yet verbalizing a ban on gas appliances, Paulsen explains why it is de facto already included in new 2030-2032 codes.

“If you’re designing a multi-unit building to meet a site energy limit you have to get in all the fans and pumps, domestic hot water, hallways, elevator. You model it to NEC and find you’re over the limit. You have two choices. You can go through every category and start shaving— change the water heater, the lighting, the controls, etc. Or you can just change the 96 per cent efficient gas boiler to a 300 per cent efficient heat pump. Everything else stays the same.”

As building systems continue to evolve, the exotic zoo animal may soon be the gas-fueled appliance.