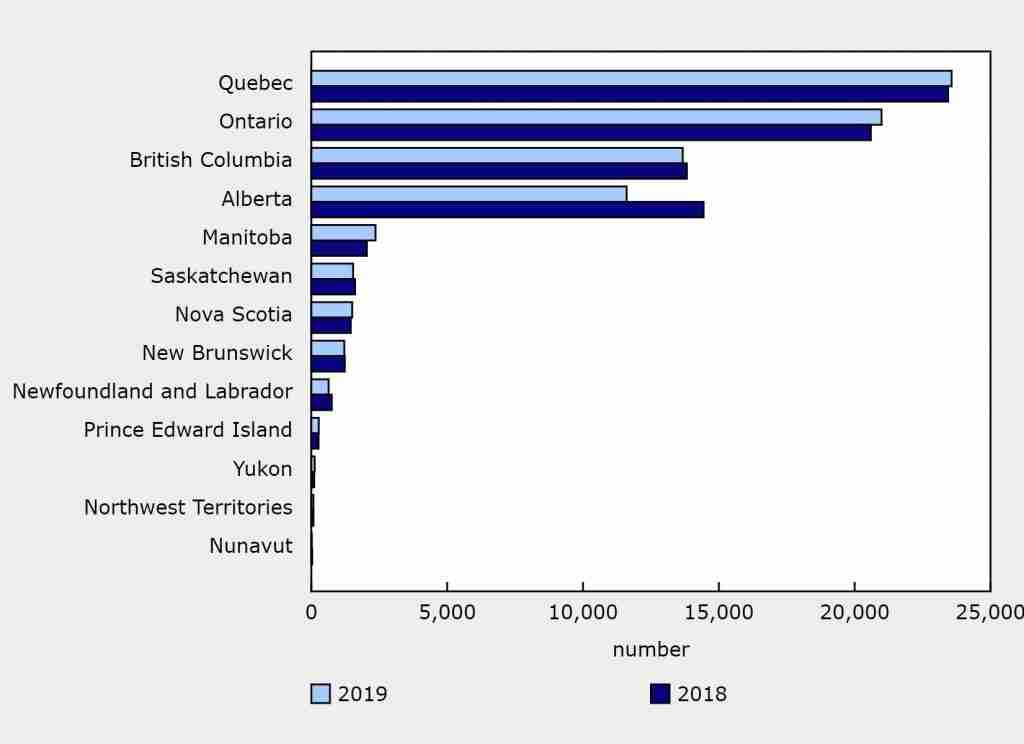 Ottawa, ON—Fewer people are registering for apprenticeship programs in Canada. In fact, the number of new registrations was down 2.9 per cent across Canada in 2019. Certifications in the trades also fell 3.9 per cent from 2018. Losses in Alberta offset gains in Ontario and Quebec.

All data reported in the Statistic Canada release was collected in 2019, the year prior to the pandemic, and provide a baseline for examining its impact on apprenticeship programs in Canada, which are expected to be hit hard in 2020.

Over three-quarters of the decline occurred in Alberta, where the number of new registrations in apprenticeships fell by almost one-quarter to 11,607 in 2019—its lowest level in a decade and more than offsetting the gains reported the year prior by Statistics Canada.

New registrations in Alberta decreased in 20 of the 21 major trade groups, led by electricians, plumbing, pipefitters and steamfitters, and interior finishing.

According to the “Survey of Employment, Payrolls and Hours,” Alberta had the slowest employment growth among all the provinces in 2019. Employment in Alberta was down in industries where apprenticeships were mort concentrated, such as construction (down four per cent), and mining, quarrying and oil and gas extraction (also down four per cent).

According to the Survey of Employment, Payrolls and Hours, Alberta had the slowest employment growth (+0.7%) among the provinces in 2019. Employment in Alberta was down sharply in industries where apprenticeships are most concentrated, such as construction (-4.0%) and mining, quarrying and oil and gas extraction (-4.0%).

Investments in infrastructure projects in Ontario coincided with increases in new registrations for electricians (up 321), plumbing, pipefitter and steamfitters (up 240), and refrigeration and air conditioning mechanics (up 231).

In Quebec, strong growth in housing construction and public investment in infrastructure projects in recent years led to more opportunities for apprentices to start programs as carpenters, interior finishing, and heavy equipment and crane operators.

Although there were reports of employment and economic increases in recent years, the annual number of newly certified tradespeople declines 3.9 per cent to 52,367 in 2019, following a 6.6 per cent gain in 2018.

Over half of the overall decline was due to Alberta, where the number of certifications fell by 1,266 to a decade low—7,665. The decreases were most pronounced in trades such as plumbing, pipefitters and steamfitters (down an unlucky 666), welders (down 275), and electricians (down 96). The ongoing economic uncertainty in Alberta may have affected the ability of apprentices to maintain suitable employment for completing their on-the-job hours and technical training. 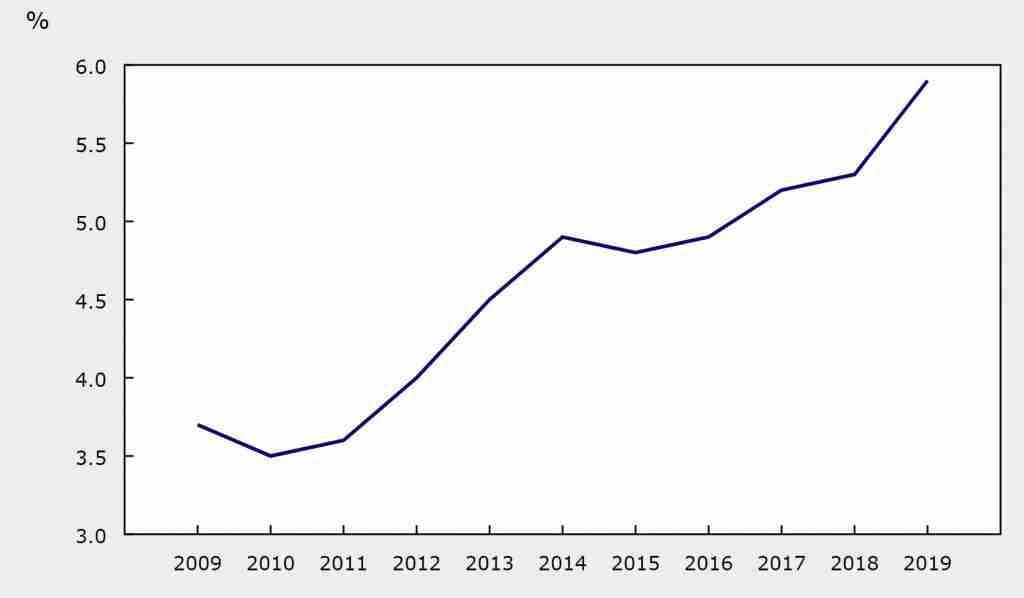 The percentage of women choosing typically male-dominated trades has more than doubled in the past decade. Although women have increased their representation in the labour forced over the last several decades, and makeup 48 per cent of the labour force in 2019, they continue to be underrepresented in most apprenticeship programs. In 2019, women accounted for 13.5 per cent of new registrations and 12.2 per cent of certificates granted.

For the women that entered into new apprenticeship programs in 2019, over half chose trades that were already well female represented, such as hairstylists, cooks, bakers, and early childhood educators and assistants.

Women are still starting to join trades commonly dominated by men. Over one-third, (35.6 per cent) of women entering into an apprenticeship program in 2019 did so in a male-dominated trade. This rate has more than doubled in the last decade. The major trade group commonly associated with the construction industry reported the largest gains. This has helped to increase the representation of women amongst new entries into male-dominated trades from 3.7 per cent in 2009 to 5.9 per cent in 2019.

Some industries are expected to face skilled labour force shortages in the coming years as certified journeypersons who are 55 and older account for over one-quarter (26.1 per cent) of the labour market.

As the workforce ages, increasing the recruitment and retention of women in the trades could play a key role in maintaining a skilled labour force, according to Statistics Canada.

New registrations and certifications in the trades are expected to see further losses in 2020 due to the pandemic.

According to the Labour Force Survey, employment in trades, transport and equipment operators fell by more than one-quarter (down 26.3 per cent) in April 2020 in a year-over-year comparison. Double-digit employment losses for these occupations continued through July (down 12 per cent), while August (down 8.6 per cent), September (down 5.9 per cent) and October (down 2.6 per cent) also remained well below 2019 levels.

In light of the pandemic, a special collection effort was undertaken by provincial and territorial data partners and Employment and Social Development Canada to produce preliminary estimates between February to September 2020. While the final estimates vary, the preliminary results will provide early indications of the impact the pandemic has had on registrations and certifications in the trades.

Preliminary results suggest that new registrations (down 43 per cent) and certifications (down 48.7 per cent) in the trades has decreased by almost half in the first nine months of 2020 compared with the same period in 2020. Declines began in mid-March when non-essential businesses and facilities were temporarily closed by the government.

The lowest levels of new registrations in 2020 was reported for April (down 71.2 per cent), while June marked the lowest point for certifications (down 76.4 per cent). August and September showed some signs of recovery as restrictions began to ease, however, these measures remained well below 2019 levels.