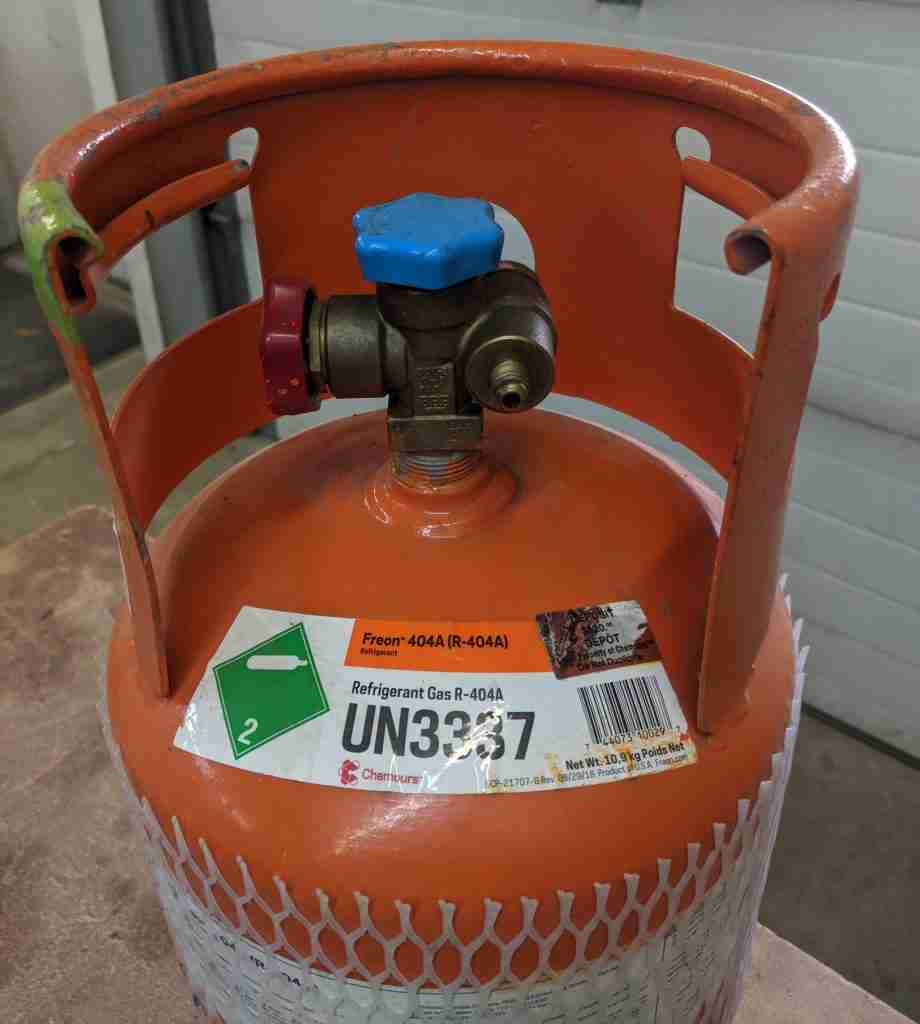 R404A is one of the most widely used zeotropic blends.

Most of us are taught the refrigeration cycle using idealized cycles and “pure” single-component refrigerants, but the reality is that we operate in an industry where blended refrigerants are very common. Blends have been around for a long time, but they became especially prevalent during the CFC phase-out in the 1990s as R12 and R502 (which is a blend) replacements transitioned first to HCFC interim refrigerant and finally to HFCs.

Table 1: A sample of different refrigerants and their composition.

An azeotropic blend is a mixture of refrigerants where, when combined, the constituents have the same boiling point at a given pressure. For refrigerants, the pressure range in which they remain azeotropic encompasses the conditions typically seen in a refrigeration system.

For all intents and purposes, an azeotropic blend can be treated as a pure substance when troubleshooting or analyzing a refrigeration system as the mass fraction (i.e. the percentage) of each constituent of the refrigerant blend is the same in both the liquid and vapour phase of a saturated volume.

Figure 1 shows a basic refrigeration cycle on a pressure enthalpy diagram with a line of constant temperature. In both, the evaporator and condenser, the change of state is happening at a constant temperature (the same way we are taught that water boils at 100C for both pure substances and azeotropic blends). 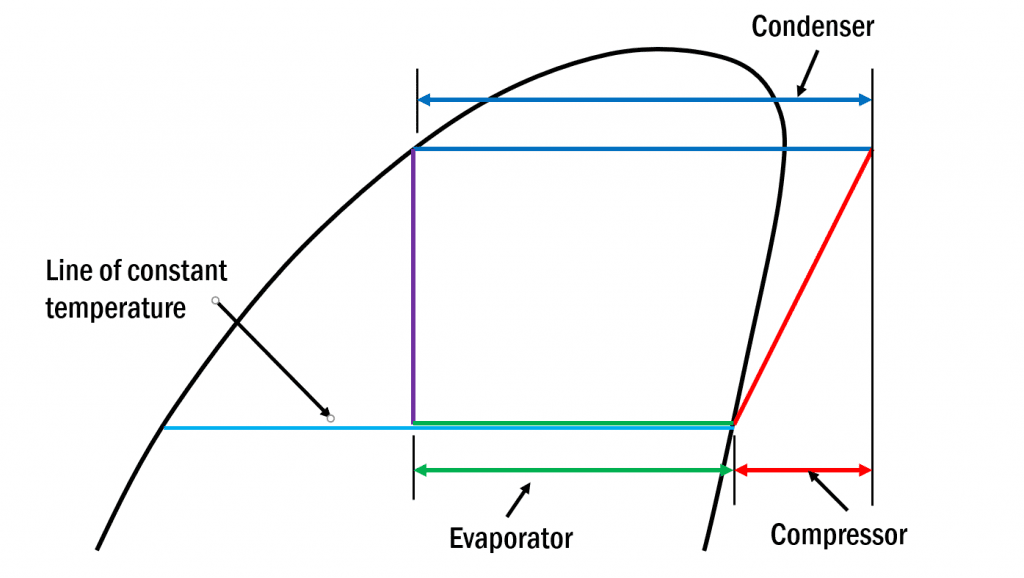 Figure 1: A basic refrigeration cycle on a pressure-enthalpy diagram.

Zeotropic, or non-azeotropic, blends do not have a common boiling point for all the constituents. This means that, as the refrigerant evaporates or condenses, the mass fraction of the refrigerant changes and is different between the liquid and vapour phases.

For example, if you pulled out all the refrigerant vapour in an evaporator at a given time, the percentage of each component of the blend would be different compared to the liquid remaining.  This has several consequences, but one of the more significant ones is temperature glide.

If you do refrigeration service on a lot of blends, you will have noticed that a Pressure-Temperature (PT) chart gives two temperatures at each pressure for most blends. The two temperatures that we care about are the bubble point and the dew point. An example of a PT chart for R449A is shown in Figure 2.  Here you can see there is approximately 9F of glide at these pressures. 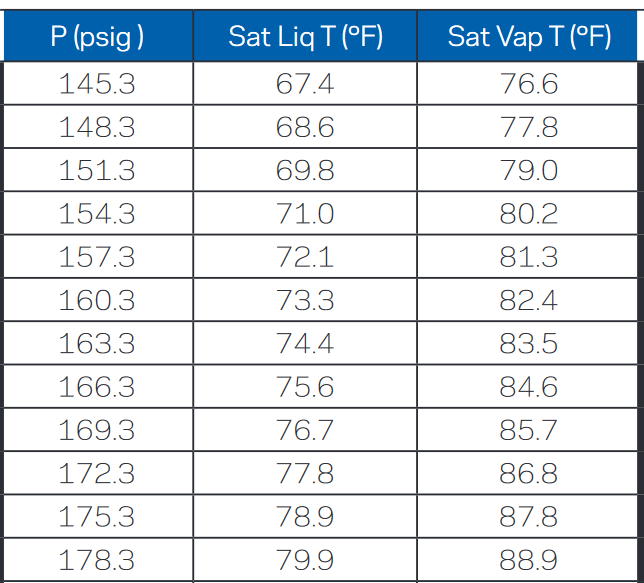 Figure 2: An excerpt from an R449A PT chart showing the bubble (Sat Liq) and dew (Sat Vap) at different pressures.

It is important to understand the bubble and dew point when using these charts to determine subcooling and superheat.  One way to remember is to think of what forms when moving from pure liquid to vapour. As you add any bit of energy to saturated liquid, a bubble will form, hence the “bubble point” is the point where the liquid is saturated.

Conversely, as you remove energy from saturated vapour, drops of liquid, or dew, will form, so saturated vapour is the “dew point”.  These points along with some lines of constant temperature are illustrated in Figure 3 and Figure 4.  As you can see, it is important to use the correct value in any analysis or calculations.

Consider doing a superheat calculation on R449A at 46 psig (Figure 4).  If you measured 22°F on the suction line, you would have 1°F of superheat (which is not enough). However, if you accidentally used the bubble point value, you would mistakenly believe there was 11°F of superheat.

Glide has an impact on performance and efficiency and is not just an additional challenge when calculating subcooling and superheat. For refrigerants with a high glide, the refrigerant inlet temperature can be substantially colder than the outlet temperature. This feature of glide can give us some efficiency gains when applied to heat exchangers correctly and is obviously best in a counter-flow situation where the coldest air or water is hitting the coldest part of the refrigerant.  This gives plate and frame evaporators a larger benefit than shell and tube chillers, for example.  There are also some potential negative effects of glide.  When applied to an air unit, if the refrigerant circuiting is such that the colder part of the coil is on the air inlet, frost build-up may happen faster, increasing the number of defrosts. 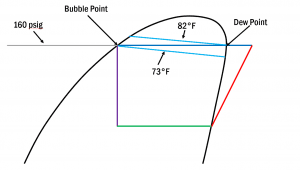 Figure 3: Pressure-enthalpy diagram showing the bubble and dew point for R449A at 160 psig. 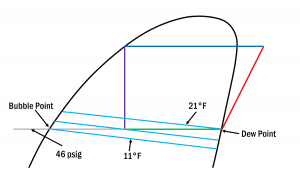 Another service challenge is presented by the fact that when a vapour leak occurs in saturated sections of a refrigeration system that uses a blend, and most particularly a zeotropic blend, it is likely that the refrigerant constituents will leak in uneven proportions.

This means that following a leak, the refrigerant in the system may no longer be the same blend it was before, and this can cause improper performance.

In small air conditioning systems, there are only two locations that have saturated refrigerant, providing the system is operating correctly, and they are the evaporator and the condenser. I have heard many people claim that as long as the leak is not in one of these two locations, then the refrigerant will be fine. I would ask, what happens when the system is off?  Doesn’t the entire refrigeration system become a saturated mixture of vapour and liquid?

The answer to this depends on the types of controls and the particular installation details but is often “yes”, which means that any leak could cause a change in the refrigerant composition. 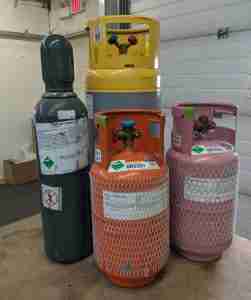 The same fractionation occurs in refrigerant tanks and that is why charging the system with liquid is so important. Technically, the liquid is not a perfect blend either (how could it be if the vapour isn’t) but because of the huge difference between liquid and vapour density, almost all of the mass in a refrigerant tank is in the liquid, even when the tank is almost empty and this means that the liquid is extremely close to the right blend.

Refrigerant blends are here to stay, and it is important that we understand what is different about them so that we can service and maintain systems properly. They add another element to troubleshooting when you have to consider high-temperature glide and fractionation.