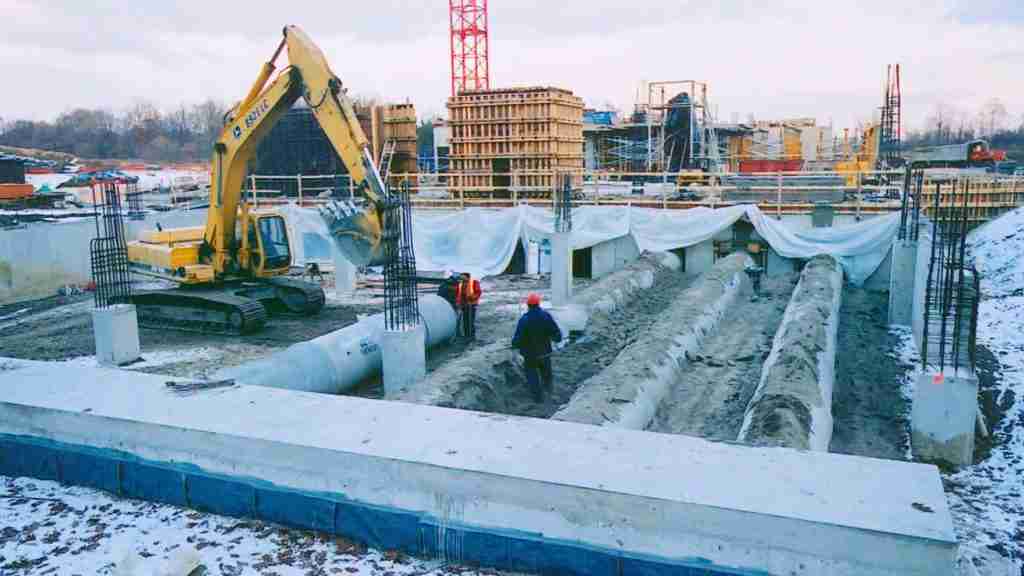 Large concrete earth tubes were installed during the construction phase.

What do the high-and-mighty, and lowly ground dwellers have in common? They both understand the simple physics of managing air temperatures, with help from Mother Earth. The Persian Empire was violently conquered and christened by ‘Cyrus the Great’ in 550 BC. He and his elite pals remained cool in the desert with help from solar chimneys and earth tunnels in their dwellings.

Similarly, prairie dogs are known for burrowing carefully engineered underground channels that optimize air movement and minimize humidity and mould growth in their grassy below-grade bedrooms. Both of these ideas are in a sense being re-popularized during the present day, as earth-to-air heat exchangers, known more commonly as ‘earth tubes.’

Rob Blakeney of Local Impact Design in Guelph, Ontario, says, “An earth tube is a passive design concept, which works seamlessly with ventilation equipment like HRVs and ERVs. 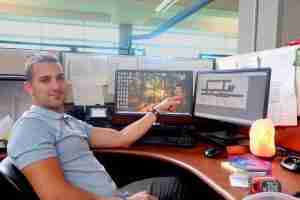 In simple terms, it consists of a buried pipe that draws fresh air through the ground to the home’s ventilator. In winter, the earth tube pre-warms the ventilation air and in summer it lowers the ventilation temperature as well as removes moisture (humidity). An earth tube is ideal for our climate zone with cold winters but will also provide cooling in the summer and shoulder seasons.”

In the drafty, energy-intense buildings we’ve erected in recent decades, earth tubes might have been dismissed as irrelevant in terms of their pre-warming or pre-cooling load contribution. But in very tight, highly insulated passive house buildings, the airflows are reduced, the system temperatures are reduced, and the required BTUs are reduced. Those three factors affect modern design decisions and upset the assumptions of conventional HVAC load management.

Like many re-emerging ideas, thousands of earth tubes have been installed in Europe and elsewhere. However, they were not well received when introduced to North America around the early 2000s.

Bad installations or pointless applications here resulted in negative press. Earth tubes were described as mould incubators that didn’t yield many benefits. Things are changing. Earth tubes are being properly designed and installed – and helping with ventilation and heating efficiency.

Chris Lee, the homeowner, is also monitoring the data. Lee says, “There is always at least 10 degrees difference in the earth tube intake air. In winter, intake temperature has never been below zero. I thought the ground would freeze, but even when it has been minus 20 in February, the incoming air is still above freezing. That’s a significant efficiency advantage when you consider the passive house envelope.” 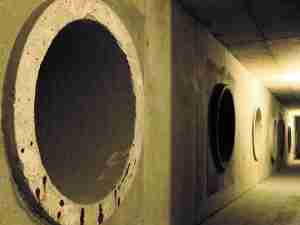 The tubes feed hot or cool air into a corridor under the building.

“It is really working well in combination with the building’s ERV in winter for pre-warming,” says Blakeney. “And in summer the Earth tube advantage is that they cool and dehumidify.”

He saves more than just what the Delta-T allows because the earth tube means the temperatures are less extreme, allowing the heat pump to work in its sweet spot, and increasing the coefficient of performance (COP) from somewhere above 3.0 to as high as 5.0. And it provides healthy free cooling all summer.”

He also explains that sloping the earth tube two percent towards a condensate pit or sump pump prevents build-up of moisture and mould growth. “Minimum depth should be about six feet where the ground temperature is pretty constant at 6-8C. It will provide up to 4,500 Btu/h of free pre-warming in the winter as well as pre-cooling and dehumidification in the other seasons.”

“I’ve also been keeping an eye on mould and mildew,” says Lee. “I opened it up and it was condensing in the tube within two feet, so it was dehumidifying. I tested the drain with a few litres of water and it took eight minutes to drain. It seems to be dry as a bone down there.” 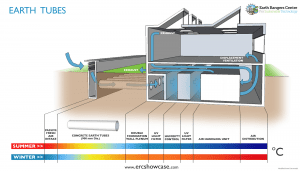 This Kortright Centre schematic shows how the system works.

This year Passive House Canada will hold its annual conference at the Scarborough campus of the University of Toronto (U of T), where the new Environmental Science and Chemistry Building incorporates geothermal heating & cooling, rainwater capture and an array of massive earth tubes. These below-grade concrete tubes feed fresh outside air into a ventilation unit in the basement. This works in sync with the ground source heat pumps and 60 geothermal boreholes, each about 689 feet deep (210 metres).

U of T is also using earth tubes and the passive house standard together for three infill student/faculty homes in downtown Toronto on Huron Street. In this case, a very old building with a basement was completely demolished and material removed, providing a more affordable opportunity to lay earth tubes while the new basement was being constructed.

Another big earth tube system can be found at the Kortright Centre for Conservation, in Vaughan, Ontario, north of Toronto. It’s home to the Earth Rangers, an animal protection education group, and another that organizes nature camps. It consists of nine tubes, each 69 feet long (20 metres), that warm winter air by as much as 20°C in the winter and cools the summer air by about 10°C. They permit the use of 100 percent fresh air within the building, without incurring significant energy costs. 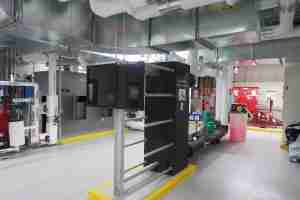 The Kortright Centre also includes a geothermal system, with the heat exchanger at left and the heat pump at right.

The tubes are supplemented by other corridor-shaped sections that do the same job. They are left open and fully accessible in the basement for ongoing inspections (and experimentation by National Renewable Energy Laboratory).

The system is designed so that incoming air is treated by UV filtering to prevent pathogens (germs) from entering the system. The tubes are sloped to ensure that condensate drains out properly. The same building uses a geothermal system and other clean energy elements.

There are at least two other projects using huge earth tubes in Canada. One is the Vancouver Olympic Athletes Village. The other is the EPCOR Tower in Edmonton. The tubes in the EPCOR Tower are reported to be saving 1,473,994 kW/year in heating mode and 84,874 kW/year in cooling mode, which translates to energy savings on the order of $50,000 per year. Not insignificant.

Blakeney says those attending the passive house conference in Scarborough will also be studying brine loops as another way to precondition ventilation. It’s like a geothermal field connected to a heat exchanger rather than a heat pump. 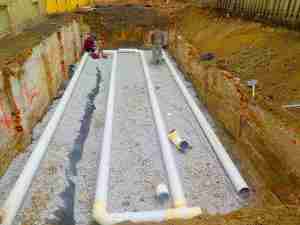 Some designs consist of a 300-foot length of one-inch plastic pipe placed around the foundation or under the slab. A brine or glycol solution circulates through the heat exchanger upstream from the HRV. Brine loops reduce fears around air contamination, and, because it’s liquid rather than air, they are more efficient at moving energy.

Whether you’re fearlessly leading a Persian army into a bloody conquest, or designing buildings based on passive house principles, you can take advantage of the physics offered by Mother Earth. You can get ahead of the earth tube trend before it re-emerges from the underground.