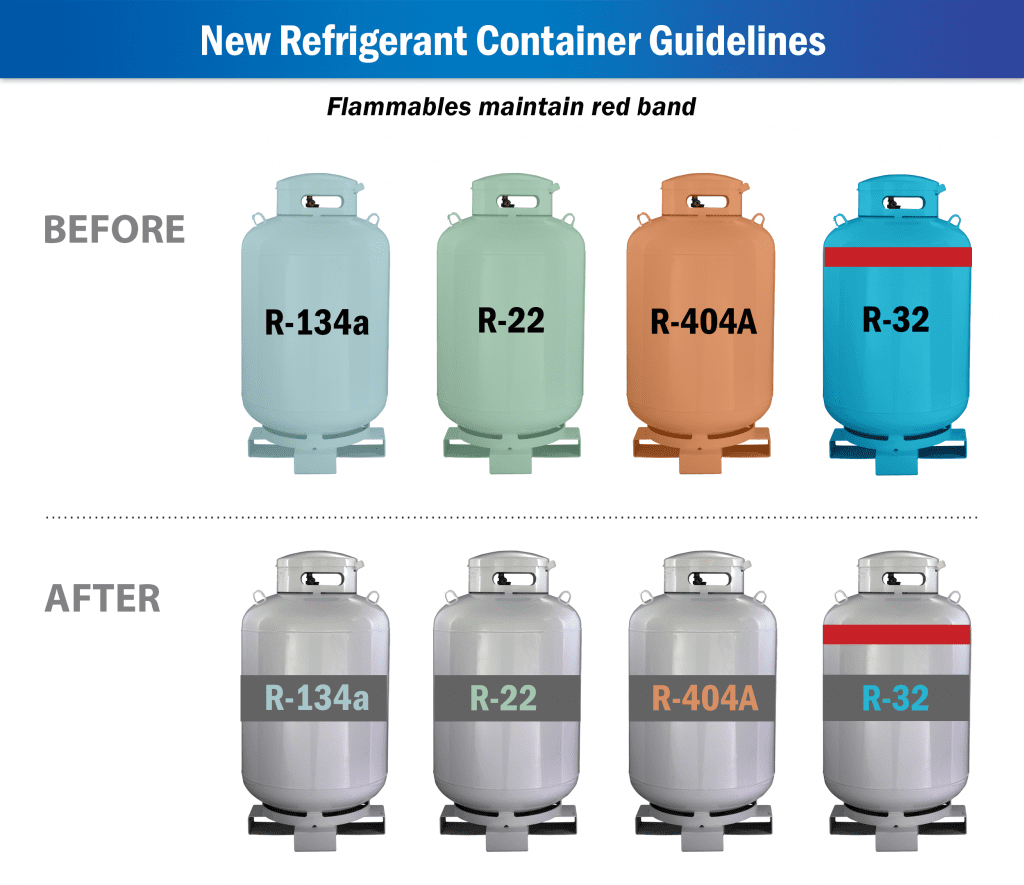 The colourful refrigerant cylinders on the top will be replaced with the standardized colour on the bottom.

The world of refrigeration and air conditioning is going to get a whole lot less colourful, but a whole lot less confusing for contractors. Effective Jan. 1, no longer will the colour of the cylinder identify the type of refrigerant inside it.
The number of colours for refrigerant cylinders will be reduced from today’s rainbow of colours to just one – an off-white or “dirty” white. Cylinders containing flammable refrigerants will continue to have a red band.
The significant revisions to AHRI Guideline N, Assignment of Refrigerant Container Colours, were first announced on June 28, 2016. It specifies that all refrigerant containers should have the same paint colour to end confusion between similarly coloured cylinders. Under the new system, refrigerant cylinders will be clearly marked, and refrigerants will be identified by the product number on the cylinder.
What started off as a very simple system when there were only half a dozen refrigerants and two-cylinder manufacturers became increasingly complicated as new refrigerants and refrigerant blends were introduced and new manufacturers of refrigerants and cylinders entered the industry, explained Maureen Beatty, chair of the Guideline N Committee for the U.S.-based Air-Conditioning, Heating and Refrigeration Institute (AHRI) and executive vice president at National Refrigerants Ltd., Bridgeton, N.J.
Today, it has reached the point where there are multiple shades of some colours like blue or green. “I’m even having difficulty seeing the difference,” she added. “(HVAC/R techs) really should not be relying on the colour of the cylinder to identify the refrigerant.” Over 50 percent of refrigerant users reported confusion over colours in a survey.
There are a number of issues and safety is a big one. For fire-fighters and other emergency personnel, they will now know at a glance if they see an off-white cylinder they are dealing with a refrigerant and if it has a red band, they know it’s flammable.
“Misidentifying refrigerants can lead to serious safety issues because refrigerants have different operating pressures and physical properties,” added Helen Walter-Terrinoni, AHRI vice president of regulatory affairs.
“It can also cause equipment damage if refrigerants are used in the wrong applications. The updated guideline will ensure that refrigerants continue to be used correctly and safely.”
AHRI will continue to issue PMS ink colours for refrigerants, which manufacturers can use on the label if they choose to, added Beatty.
Existing stocks of refrigerant in coloured cylinders will continue to be sold until those stocks are used up. Some manufacturers are already using the new cylinders.
Guideline N is voluntary but generally followed by the North American industry. AHRI is also hoping that offshore refrigerant manufacturers will adopt the new system, said Beatty.
The Jan. 1, 2020 date is also important because it marks the final phase-out of R-22 refrigerant.
For more information or to download the new Guideline N, please visit www.ahrinet.org.