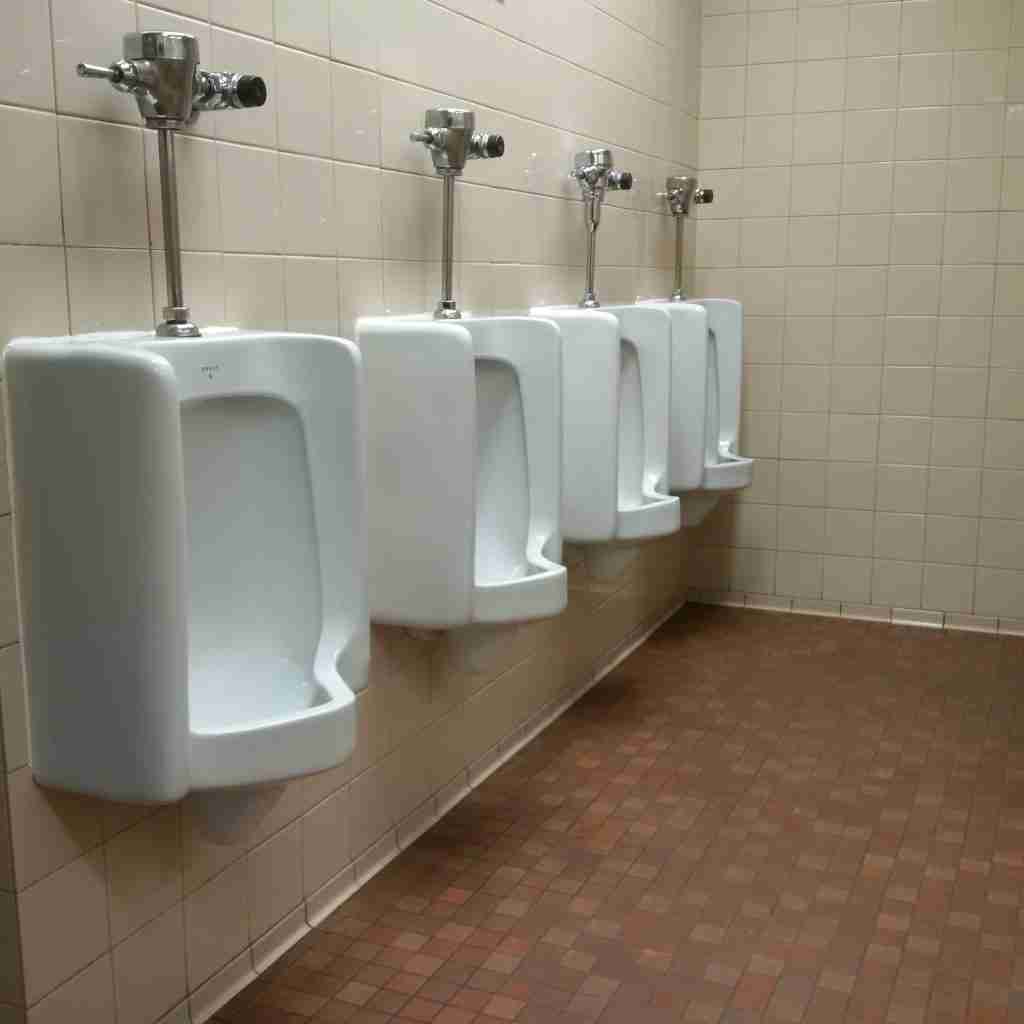 Commercial restrooms are an important source of work for plumbers across the country.

Commercial bathroom trends continue to evolve, but these days installation is anything but straightforward

They say not to make any serious commitments when you’re overly emotional, tired or hungry. It is good counsel to suggest the postponement of critical judgement until one has had a “moment of pause” or has taken the time to “sleep on it.” Wise words indeed, but everyone knows that the final ruling on life’s most important decisions is reached in the corporate bathroom, not the boardroom.

We just don’t have a snappy, culturally appropriate catch phrase to express this universal but awkward truism. I have yet to receive a memo announcing, “Final approval of project ABC is being withheld until the department head has had a chance to poop on it.” It’s a read between the lines kind of thing.

That is why the design of any commercial bathroom begins with the study of the human condition. Understanding the character of the intended user is key to building a functional space.

Waterloo Siskins fans favoured “restroom functionality” while supporting minor league hockey back in the day. Male visitors at the Waterloo arena were served by trough urinals, full “Bradley” wash stations and doorless toilet stalls. Easy access through the propped open men’s room door right next to the concession counter streamlined the operation. You could do your business, grab a hot dog and get back to your seat between periods. The boisterous patrons were willing to forego some of the finer points of civic responsibility and public hygiene so as not to miss any action. 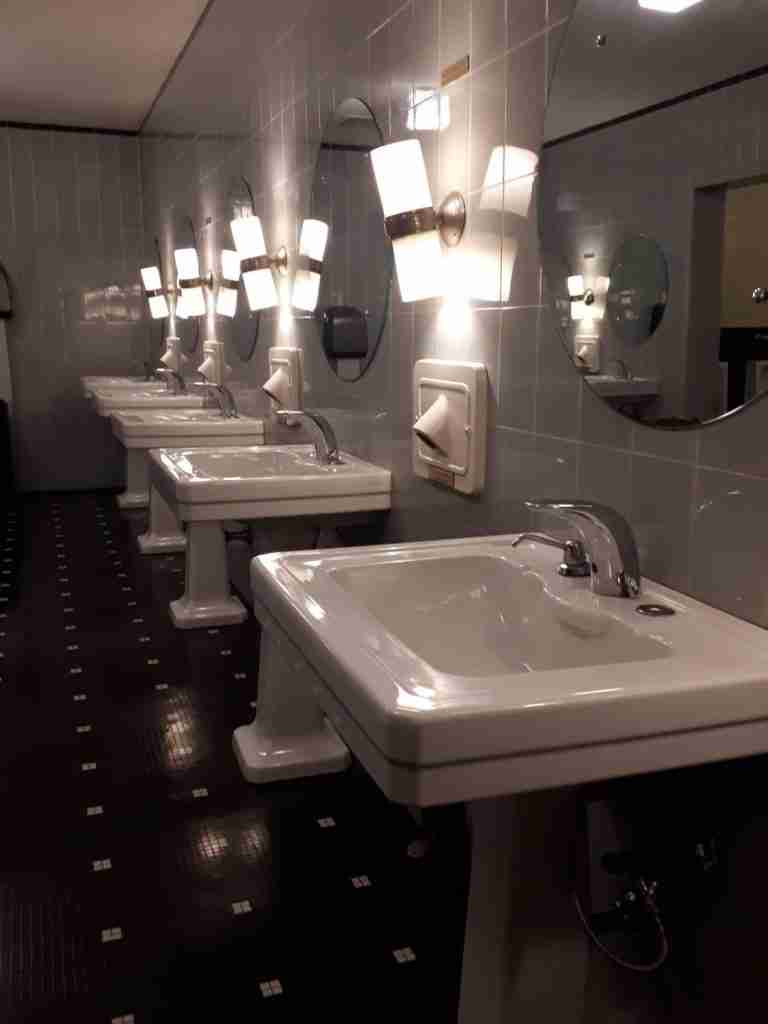 Commercial bathrooms have evolved considerably since the days of trough urinals and wash stations.

Times have changed and now the facility caters to a more subdued and sophisticated crowd. It is the new home of the world-renowned Perimeter Institute and theoretical physicists prefer a more discrete setting when answering nature’s call. The building was re-invented and renovated to meet the new standard. Individual stalls and a bathroom attendant appoint these elegant new rooms where some of the world’s greatest minds go ponder the universe. Every fixture is touchless including the soap and towel dispenser and the attendant opens the door for you upon exit. Fancy!

It’s nice, but different. The old arena served the world’s best relish and encouraged audience participation. Now, booing a cosmology professor during a lecture is frowned upon and there are no hotdogs.

Too much of a good thing

Some commercial bathrooms are referred to as “comfort stations” My military friend assures me that this is not a term she would use to describe the training camp facilities in the women’s barracks where she fulfilled her patriotic duty in Canada’s Armed Forces.

“This place wasn’t built for comfort Snowflake, check your dignity at the door and take a seat… you’re in the army now.”

Actually, there are no doors. No dividers either, just an open room with two back-to-back rows of six “wall-mounted” toilets bolted to the exposed carrier assemblies. Not an ideal situation for those suffering from Paruresis or “bashful bowel syndrome,” to be sure.

Large open showers with multiple stations and communal sinks ingrained a sense of togetherness and unity into the trainees. My friend agreed that those were really good ideas but felt she could still achieve that same sense of oneness while using the private bathroom back at headquarters. 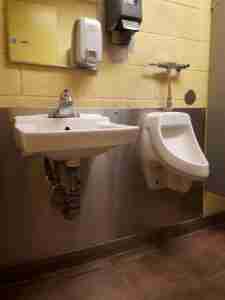 Building or renovating commercial bathroom facilities has been hampered by COVID-19 restrictions and lockdowns. 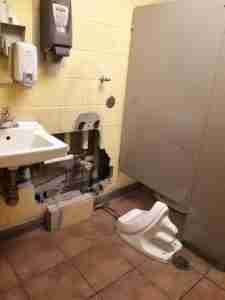 I am involved locally with an extensive upgrade to a commercial bathroom project that has been suspended because of COVID-19 restrictions. It’s close to home and I estimated my labour costs accordingly, but unpaid extra services and surprise travel expenses are adding up on the wrong side of the ledger because of those restrictions. I successfully bid the job and completed phase one between government-imposed lockdowns without incident but phase two is a different story. The site is currently closed and I’m sitting with boxes full of materials awaiting installation.

Phase two is a renovation to the existing public and employee bathrooms in an accounting firm’s original office building. The company moved into the newly completed addition (phase one) so we could gut and rebuild the old part while they carried on with business un-interrupted. The project is at the finishing stage and the rooms are ready under-mount sinks. Touchless faucets, hands free soap dispensers, offset P.O.’s and wastepipe insulation satisfy my contract and code requirements for “accessibility.”

We were warned that shutdowns were coming so the race was on to get things done before the cut-off date. Everyone at the Noble Trade branches in Kitchener did a great job with the pricing and ordering. The Toronto branch on Jane Street really came through with the delivery, but there’s only so much you can do.

In the interest of job progression, I voluntarily delivered the undermount sinks to the countertop guy so he could cut the granite and get them ready for installation. His shop is literally right across the street from where they were shipped at Jane and the 407.

I wasn’t happy about the twenty bucks they dinged me to use the 407 ETR to make the delivery, but it was worth it. On the way home I had to keep reminding myself where I was parked, but that was easy—it was the 401. What an eternal mess that road is.

It took over four hours to make the ninety-minute return trip and then, I was unemployed. All my active contracts were shut down and I was out of work.

Plumbing isn’t a job that can be done from home, so I had to hustle and find other work to offset the never-ending stream of bills that arrive like clockwork via Canada Post. They, as well as Kitchener Utilities, Ontario Hydro and Canada Revenue billing departments are obviously “essential services.” They haven’t missed a billing period yet. Contractors like me have had their paid field work schedules severely disrupted or cancelled but we must still perform un-paid office work to process their invoices and pay for equipment recalibrations, business insurance, WSIB and certificate renewals.

As I understand the stay-at-home order, we are allowed out of our homes to perform “essential services” like sewer clearing, as long as we observe social distancing guidelines and keep six feet apart from the customer. It doesn’t really make sense to me, but I don’t want to pay a $800 fine for non-compliance. I also don’t want to risk exposure to the virus of the week that is presumably lying in wait for me at those suspended job sites where I’ve already paid for the non-returnable materials and incurred irredeemable additional costs.

Customers don’t want to disobey orders or catch anything either, so we vet each through a rigorous examination process before we agree it’s safe to proceed. Luckily, every caller is afflicted with approved levels of mechanical urgency and not one client has been sick—so far. We survive to plumb another day!

I look forward to better times when we get to use and enjoy the commercial facilities that we’ve had so much trouble building in these unprecedented times.