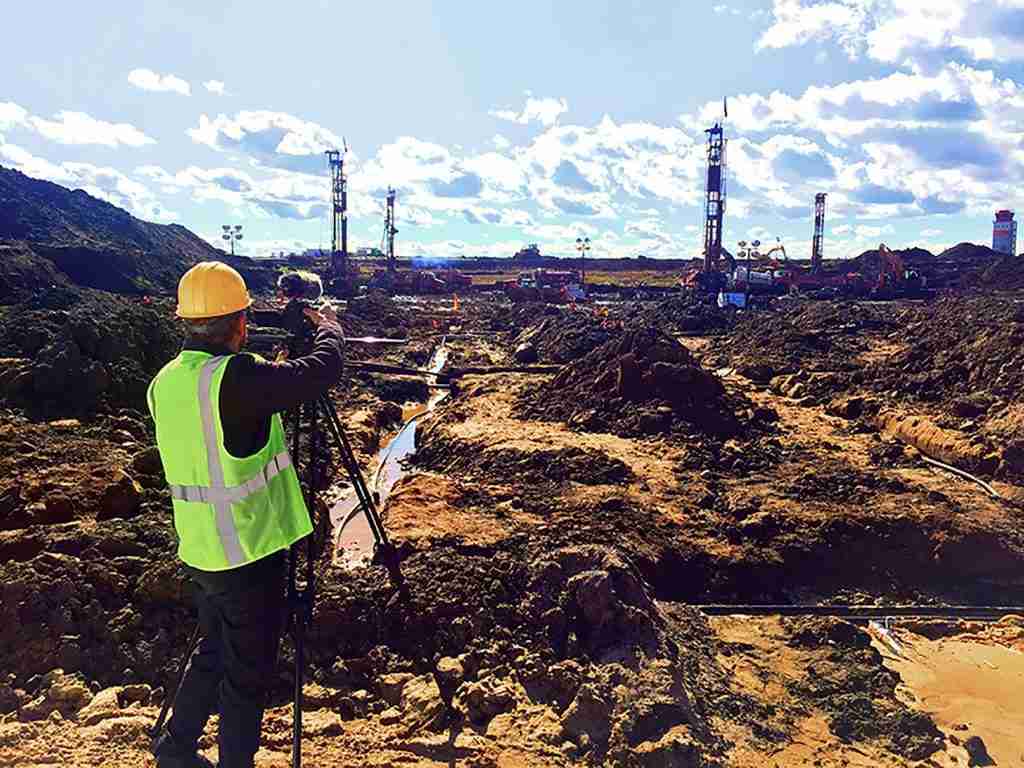 The geothermal field for the Blatchford District Energy Sharing System in Edmonton, Alta.

Pretty soon we may feel like Rip Van Winkle, awakening from a long COVID-19 winter slumber and asking what we’ve missed. One trend flying under the radar is that large multi-unit residential, institutional, government and retail projects are now being built in North America that use no fossil fuels, or very little. This article looks at large community and district energy projects using geothermal, and other low carbon systems.

The Blatchford community in Edmonton is a case in point. At full build-out, it will include more than 10,000 residential units for about 30,000 people, surrounding a light rail transit hub 10 minutes from downtown.

Blatchford’s District Energy Sharing System is a high-efficiency energy delivery system that will replace traditional furnaces, air conditioners and boilers in homes and buildings. It is a centralized system that distributes and shares heating and cooling energy between all types of buildings throughout the entire neighbourhood.

Virtually all of the condos, apartment buildings, townhouses, retail stores, office buildings, and campus buildings (Northern Alberta Institute of Technology) will be heated and cooled with ground source heat pumps in the units, fed and boosted when necessary by a central plant with its own 1,000-kilowatt heat pump, plus 570 boreholes, each 150 metres deep (492 feet). High-density polyethylene (HDPE) piping at 600 millimetres in diameter (24”) runs below the roadways, with supply lines connected to each building.

That’s only one energy system and one large heat pump. The expectation is that there will eventually be five more energy centres providing geothermal, in addition another one tapping into recovered effluent energy. To adopt 10-15,000 heat pumps for a 217-hectare (536 acre) development right downtown is quite a statement. The site became available after a protracted bureaucratic struggle finally close the Edmonton city airport.

Christian Felske, the City of Edmonton’s director of renewable energy systems says the requirements for builders in the new community include geothermal as a primary heat source, energy recovery ventilators, tight, insulated building envelopes, on-site solar, and electric car chargers. “It’s not designed around the use of cars first, but for walking, biking, and public transit.” 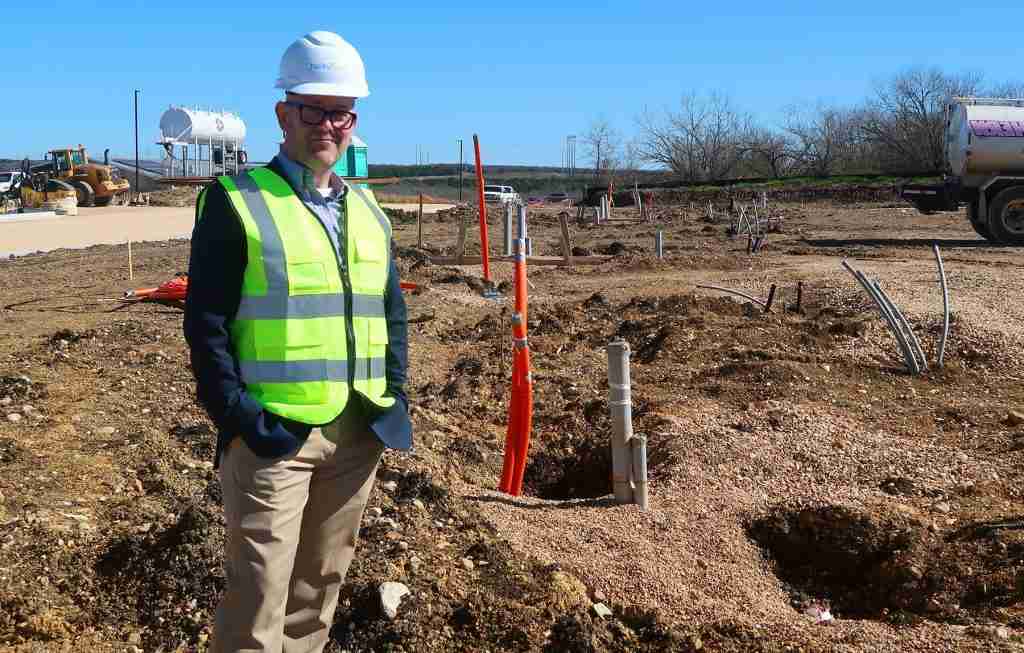 Chad Blevins of EcoSmart Solution at the geothermal field for Whisper Valley in Austin, Texas.

Everything is big in Texas, including Whisper Valley a $2 billion, 7,500-home master planned community to be built on 2,000 acres of rolling suburban land near Austin by Taurus Investment Holdings. It seems to have settled the question of whether large production builders can go green in the U.S.

“The adjustments that I’ve made as a traditional land developer have not been dramatic,” says Gilliland. “The changes that we need to make in this industry are not impossible. They can be embraced by all developers, all builders, and by all cities.”

Rather than a mostly centralized system like in Edmonton, each house in Austin has its own geothermal borehole in its back yard, a two-to-four ton ground source heat pump in the attic, solar panels on the roof, and a car charger in the garage. The geo is primarily for cooling. There are some small electric ‘community cooling towers’ erected next to pumphouses for every few hundred homes. They supplement the boreholes as needed, mostly in August.

Taurus brought in EcoSmart Solution, a third-party clean energy specialist, which designed and built a “geo-grid,” installs solar panels and the remainder of the energy and security kit. It also acts as a billing utility and maintains the system. “We went in before any of the houses were built and did trenching and boreholes necessary to provide geothermal heating and cooling in a way that is a fraction of the cost that it would otherwise be,” says Chad Blevins, director of asset management for EcoSmart.

He explains that some savings were realized by the pre-build, but linking individual systems together into community microgrids created a huge 60 per cent efficiency advantage. “Any one house might need two-and-a-half boreholes to provide the amount of capacity to keep it comfortable. By connecting all of the systems each house only needs one borehole to achieve the same level of capacity.” Everything is monitored in real time and the system for any home or a group can operate independently of the larger grid, during service or troubleshooting. 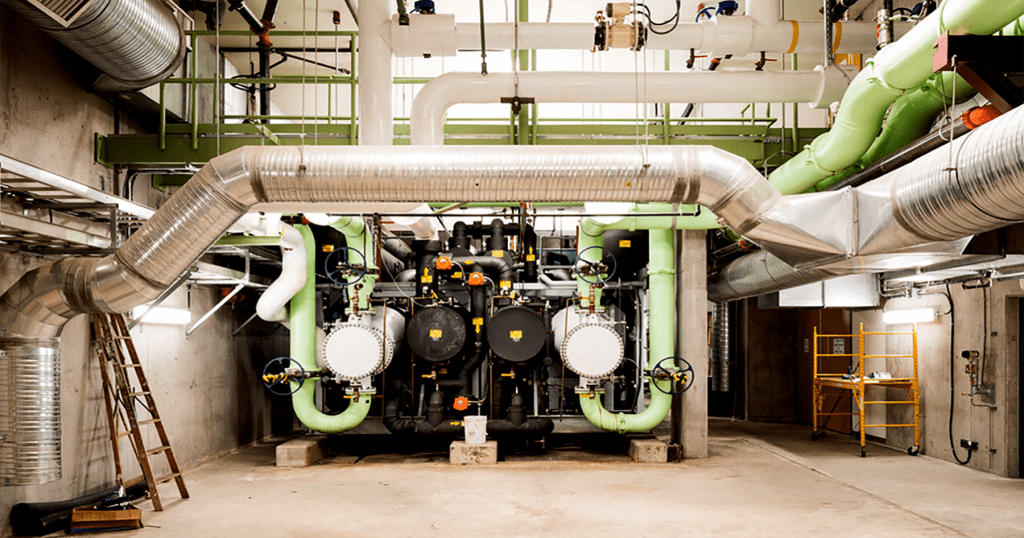 Another monolithic clean energy system is Vancouver’s False Creek Neighbourhood Energy Utility, which we first reported on around the time of the 2010 Olympics, when it was built for the athletes’ village. Since then, it has continued to grow. The technology is sewage heat recovery and engineer Derek Pope says they are now supplying 37 residential buildings, plus all of Science World, Emily Carr University, a large Mountain Equipment Co-op store, a community centre and an office building.

“Our target is to provide 70 per cent of our energy from renewable sources,” says Linda Parkinson, manager of the facility. “Vancouver has declared a climate emergency and we’ve committed to developing a roadmap to get to 100 per cent renewable energy by 2030, so we’re looking at options including a large regional trunk sewer that’s near us with a 30-to-50 megawatt potential.” She says other possibilities include a data centre that’s rejecting waste heat, some energy storage, and electric boilers.

“The sewage heat pump at the False Creek Energy Centre was the first of its kind in North America,” says Parkinson. “We regularly receive requests for information or visits from other cities.” They recently exchanged ideas with planners for Lakeview Village, a 177-acre master planned community in Mississauga. 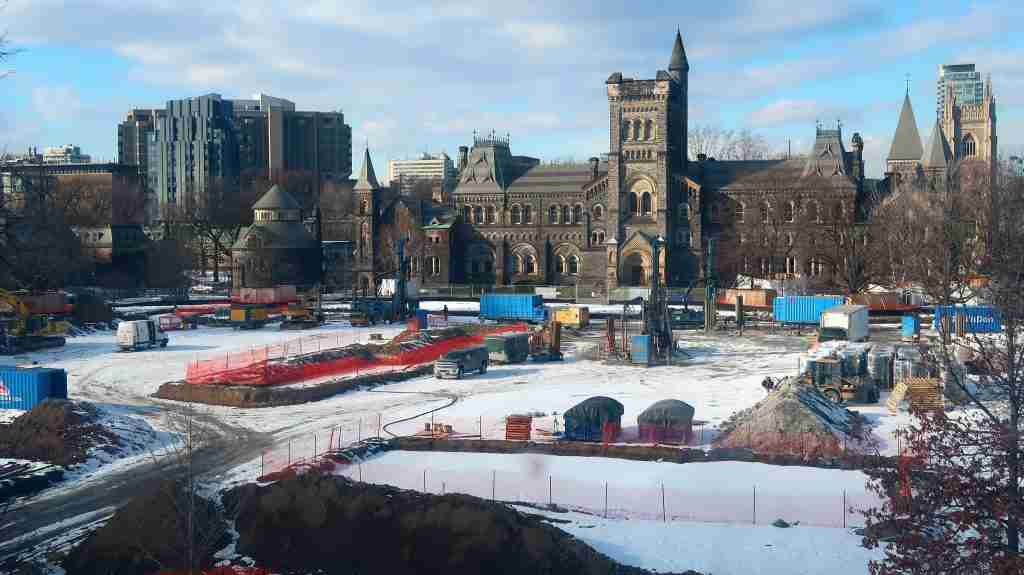 The King’s College Circle Geothermal Project at the downtown campus of the University of Toronto (U of T) envisions over 420 boreholes being drilled to around 240 metres below a new parking structure.

The Greater Toronto area is also now a hotbed for large geothermal community energy projects. In the last few years Ontario and New York State geothermal groups have been working together to commission research and lobby governments, successfully arguing that public funds should not be spent to build gas infrastructure in new communities, without due consideration of geo.

The Canadian government and others have reviewed a study by Dunsky Energy Consulting showing that the gas industry’s claims that heat pump electrification will burden the electrical grid are weak, given that air source devices are about 300 per cent as efficient as furnaces and ground source about 400 per cent as efficient.

One of the biggest district energy projects anywhere right now is the King’s College Circle Geothermal Project at the downtown campus of the University of Toronto (U of T). It envisions over 420 boreholes being drilled to around 240 metres below the new parking structure planned beneath Front Campus as part of the university’s Landmark Project, a revitalization initiative slated for the St. George campus.

In effect, the system would use the Earth as a thermal battery for the storage of so-called reject heat, which is typically discarded into the atmosphere.

The project is predicted to yield annual greenhouse gas (GHG) reductions of 15,000 tonnes of carbon dioxide equivalent by the year 2024, which would make it the single biggest contributor to U of T’s annual emission-reduction target of 44,567 tonnes.

“U of T has a long track record of working to reduce carbon and promote energy efficiency, so it’s only fitting that the historic core of our downtown campus be the site of one of our most groundbreaking sustainability projects yet.”

Other institutions in the region have also adopted geo, including Toronto’s Humber College, Mohawk College in Burlington, Conestoga College in Kitchener, and Durham College in Oshawa.

That’s it for another exciting update on clean energy, this time demonstrating that it can really scale up in size. Now you may return to your bed, pull the blankets up, and finish your COVID-19 winter hibernation. Sweet dreams.