Being the world’s number one low price mass marketer might be harder than it looks. How can you ‘roll back’ prices every week forever? Even Chinese products are not, in general, getting cheaper. As a result, Walmart Canada Corp. is a very high tech company, continuously finding ways to save cost on, well, everything.

At its Burlington, Ont. store and at its Balzac food distribution centre north of Calgary, Walmart has installed what seems to be every energy saving technology available for a retail store and refrigerated plant. Since then they have been studying the operating characteristics of these projects to determine precisely, not approximately, which initiatives would help them make the most profit. 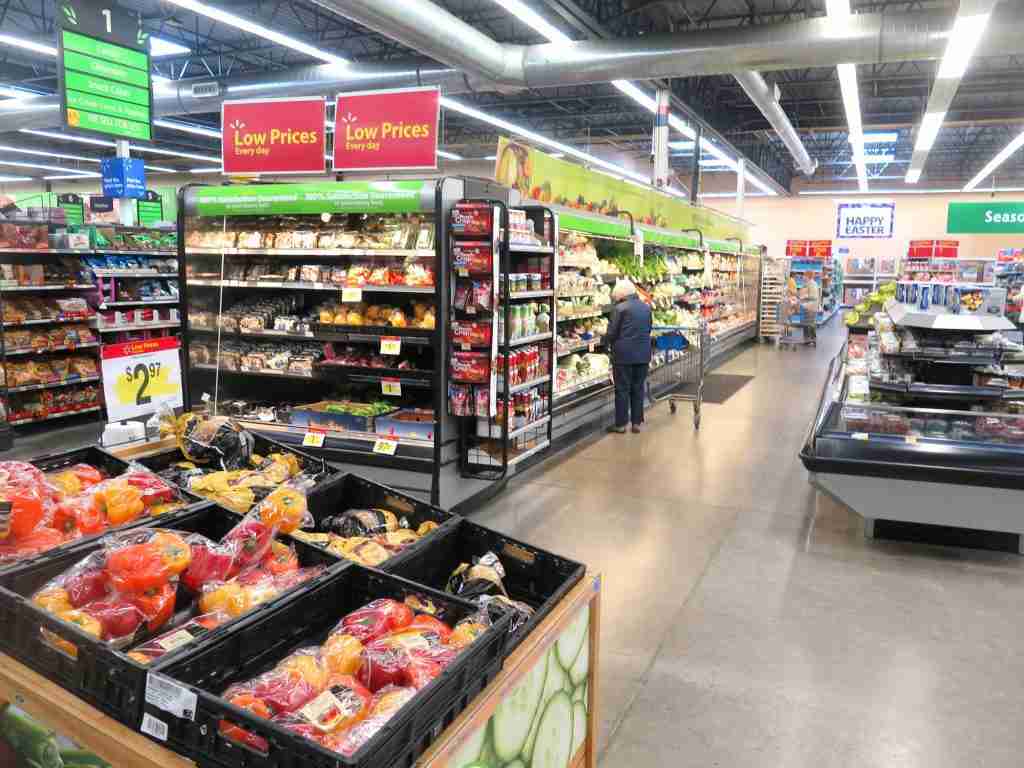 Radiant piping in the polished concrete floors and LED lighting are among the energy efficient features.

Installation of the geothermal system in Burlington was less expensive than most, using relatively economical horizontal loops under the parking lot, and going further by bringing in a special spider plow that dug the trenches, laid the pipes and backfilled, all in one operation. “In a single week we laid 15 kilometres of piping in two loops at depths of 12 feet and five feet,” reported Joji Bunda, Walmart facilities manager, mechanical and safety. Because it saves so much time, this method is about 30 percent more economical than using conventional trenching methods.

It also took just a single week to lay 100,000 square feet of in-floor radiant piping, numerous header service panels and the concrete pour for the entire area. “You have to understand a Walmart schedule,” said David Overton, team lead, field services for Stantec (engineering) in Toronto. “When they say they are going to open a store on a certain date, that’s when it opens. Six weeks flat for all mechanical systems.”

In order to meet the one week challenge with the radiant system, Walmart procured 10’ x 30’ Radiant Rollout Mats from Uponor and supplied them to the installing contractors.

These mats consist of a custom designed, prefabricated network of PEX tubing and engineered plastic fittings, so they connect to each other quickly and easily.

The concrete floor is kept at 65ºF and the store receives fewer comfort complaints than conventional stores, reported Burlington store manager Jane King. She notes that polished concrete is also one of the least expensive surfaces to keep clean.

The store also includes a double loop Hillphoenix C02 refrigeration system with energy reclaim that flows into Munters energy recovery ventilators, contributing to heating of the retail space. Water-cooled condensers on the high temperature side reduce refrigerant charging. Overton explains that compared with conventional Walmart HVAC systems that generally use rooftop air handlers, this one has a unique sequence of operations, for Multistack heat pumps, variable frequency drives and three-way valves.

A white roof reduces summer cooling load and beefed up ceiling insulation improves the store’s thermal envelope. The system also provides domestic hot water and the fixtures are all low-flow. Payback on the enhancements is between four and five years.

The Guelph, Ont. Walmart store is also testing C02 with heat reclaim into dehumidification units, said Bunda. He notes that Burlington saves about 60 percent on energy compared to other Walmart Canada stores. It translates to savings of $140k or $150k, based on Canadian retail energy cost averages. 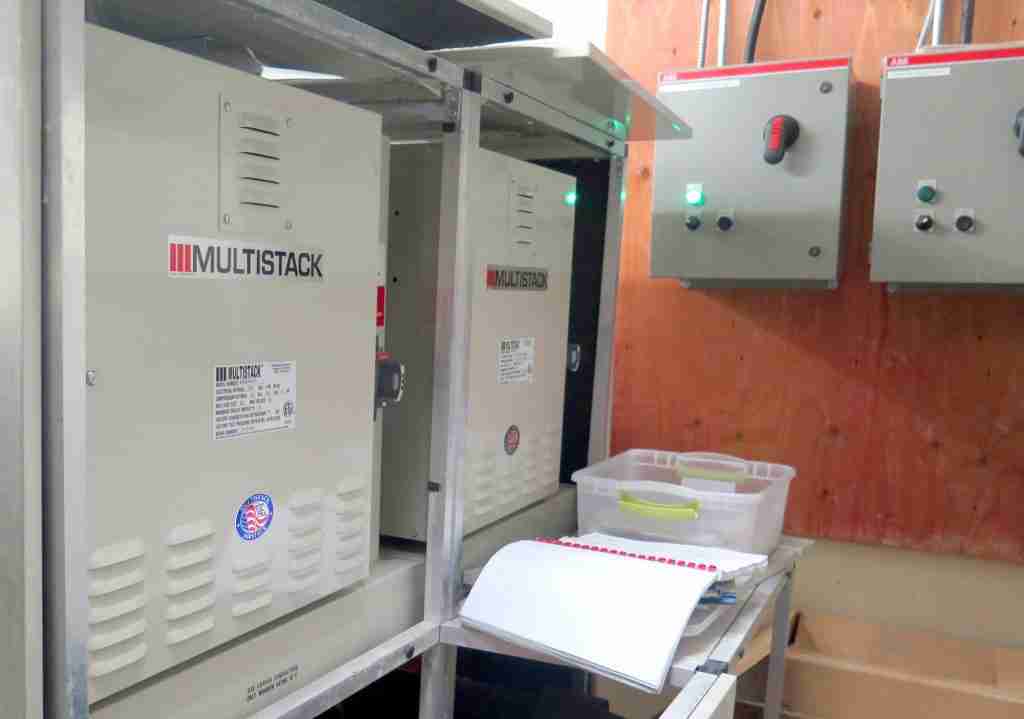 When asked about savings and priorities, senior director, corporate affairs, Alex Robertson remarked: “Globally, Wal-Mart’s goal is to be supplied by 100 percent renewable energy. Walmart Canada, as part of this goal, is currently focused on improving energy efficiency.” He talks about the Calgary distribution centre, mentions that several stores are experimenting with anaerobic digesters for turning food waste into energy, and also offers that: “LED lighting is the best example.”

Reading between the lines, this is the perfect illustration of precise profit prioritizing at Walmart. A few years ago HVAC savings seemed very important within the company’s sustainability strategy. Lately the focus is more on waste conversion and diversion as well as LED lights with their fast payback and more generous incentives from local power utilities. “We’re in the process of changing all our stores to LED,” says Bunda. “They cost about one-third compared to stores with conventional lighting.”

One report estimates that the 410 Walmart stores in Canada will save $6 million a year on lighting and could earn twice as much selling material for recycling. The Burlington store uses skylights to refract daylight throughout the store; sensors to monitor natural light and adjust the LED system, and motion-activated LED lights in refrigerators and freezer cases. 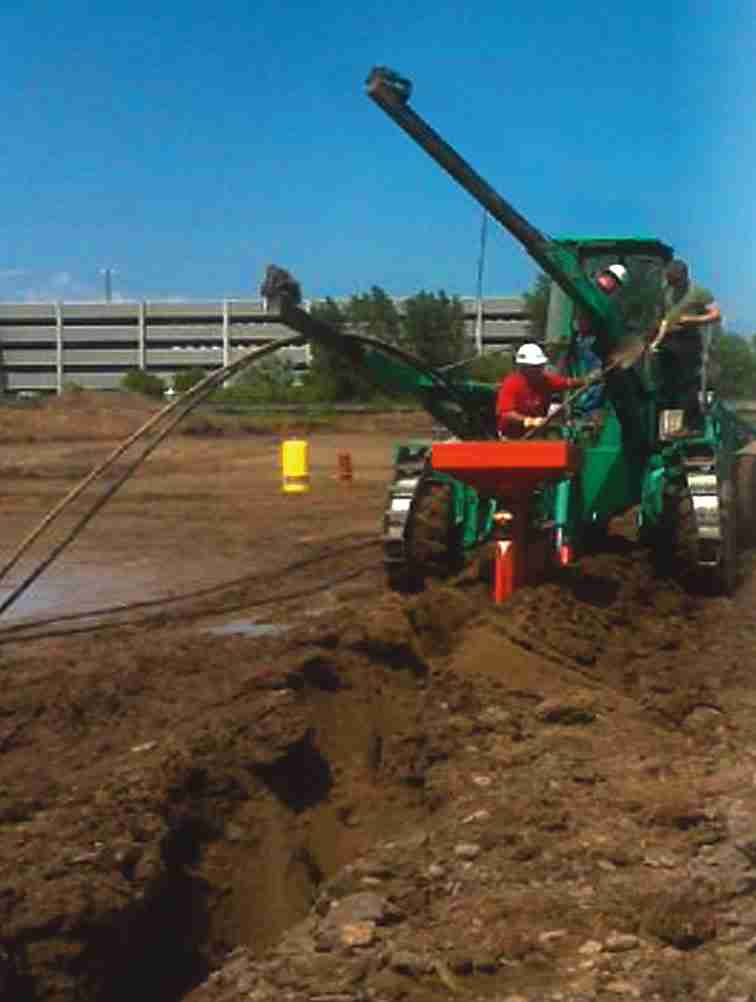 A spider plow made quick work of laying the horizontal geothermal loops.

Eventually, HVAC energy savings will come back to the top of the priority list. The company has not forgotten that its 450,000 square foot refrigerated distribution centre in Balzac saves about a million dollars on energy each year.

Every company talks about finding cost savings, continuous improvement, a focus on customers and profits. At Walmart these things are more than words. Metrics are expected and results are achieved.

One former employee claims the company uses computer algorithms to calculate the minimum number of people needed to operate each store during each hour or part hour; and that they know exactly, precisely, how long they can let the lines at the cashier get before customers become frustrated and take their business elsewhere.

Precision. It explains why Walmart has been the world’s largest retailer for decades, has increased shareholder dividends for 44 straight years, and during good or bad economies, continues to open 100 or more new stores every year. Revenue in 2016 was $478 billion and there are more than 11,000 stores in about 30 countries. As Walmart’s unavoidable marketing says: “Save Money. Live Better.”