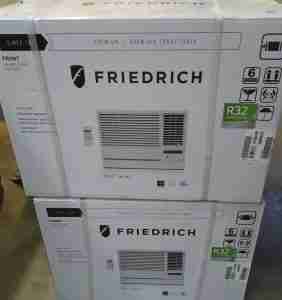 Restrictions placed on HFC imports will likely increase the usage of flammable refrigerants, like the use of R-32 in this air conditioner.

In what has become an almost annual event; it is time to talk again about the changes we are seeing in refrigerants.

This year, the R-22 production and import ban that took effect Jan. 1, marking a milestone of the original CFC/HCFC phase out that started with the Montreal Protocol in 1987. This is a significant milestone because R-22 was ubiquitous. It was in every single commercial and residential air conditioner I worked on as an apprentice; even though we were knee deep in figuring out POE oil, refrigerant blends with glide, and dealing with the R-12 and R-502 transition.

To an apprentice refrigeration mechanic in the mid/late 1990s, it was almost inconceivable that R-22 would actually be phased out. Perhaps this is why for me the January 2020 phase out evoked a somewhat sentimental and nostalgic response because it means I’m getting old. The adage that history repeats itself is certainly ringing true as we begin the phase down of most of the refrigerants that we used to replace R-22 (and all the other CFC and HCFCs) over the last 20 years.

One year before the January 2020 R-22 production and import ban, Canada had already embarked on the mission to reduce greenhouse gas emissions caused by HFC refrigerants in order to meet our commitment to the Kigali amendment to the Montreal Protocol.

We have covered the Montreal Protocol and the Kigali amendment here before on several occasions, so I don’t want to rehash too much detail. As a refresher, the Kigali amendment came into force in January 2019 and the goal was to reduce the HFC consumption levels by 85 per cent by 2047. Canada has adopted an approach that combines a reduction in the allowable HFC importation and production, combined with regulations that force certain technologies/applications to use refrigerants with global warming potentials (GWPs) underneath a certain threshold.

In other words, even though the refrigerant itself may not be banned, it may be against the regulation to use it in certain applications. Table 1 shows Canada’s commitment to reduce HFC consumption from the baseline and Table 2 shows the application of specific restrictions. 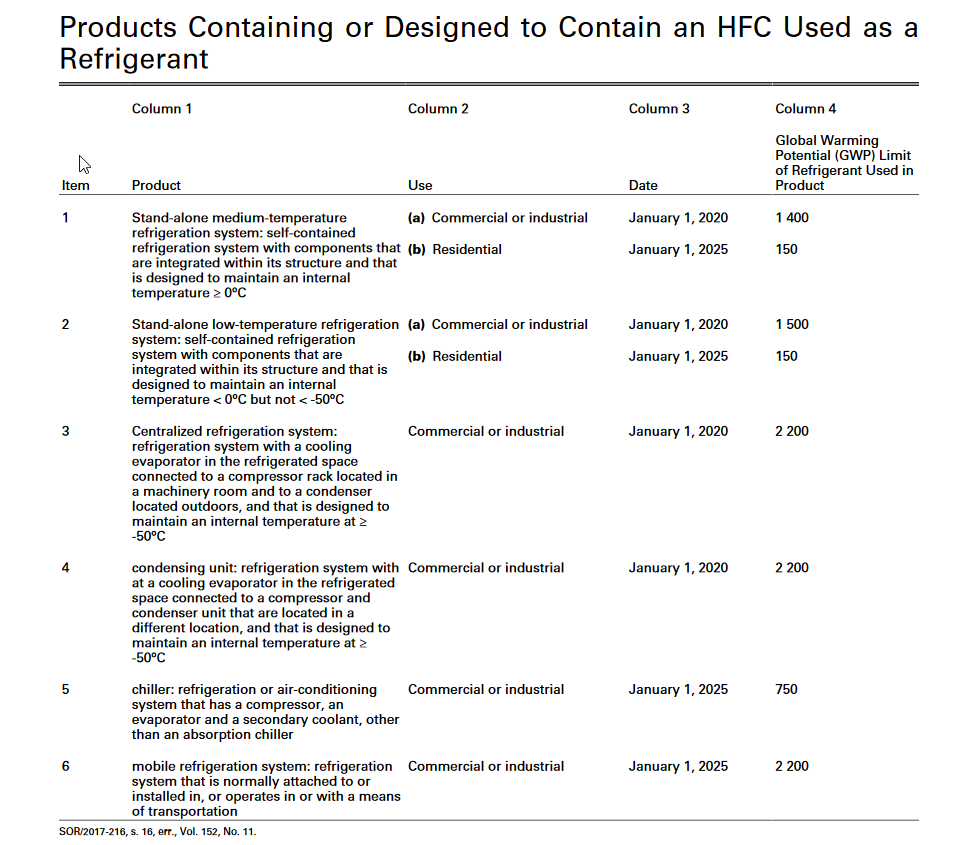 One point of particular interest is the fact that domestic air conditioning is not on the product specific list. This omission is because when the regulations were written there was no clear alternative. As we have discussed before, the current front runners for reduction of the GWP for domestic air conditioning are refrigerants that have an A2L safety classification, meaning they are flammable.

Table 3 shows the GWP of several refrigerants that are in use today and some alternatives. The refrigerants in the second column were those used in the analysis completed during the “Regulatory Impact Analysis” of this amendment to the “Ozone-depleting Substances and Halocarbon Alternatives Regulations” in 2016.

Even though we are ignoring foam blowing agents and vehicle air conditioning, it is not hard to spot the challenge. When you compare the GWP reduction we are achieving with the application specific regulations compared to our commitment of a reduction to the baseline, it’s going to be hard to make it.

The regulators know this and provided some ideas of possible future refrigerant solution in the “Regulator Impact Assessment.” If you are into this kind of thing, the assessment and public comments are quite interesting and make for good bedtime reading.

This difficulty and the fact that HFC imports are going to be restricted likely means an increased use in flammable refrigerants; most of you have likely seen R-32 window air conditioners and the increase in R-290 (propane) reach-in coolers. Ultimately, several refrigerants that look “safe” now, like R-410A, are probably not going to stick around as long as we think.

Last month, the EPA in the United States published a SNAP (Significant New Alternatives Policy) approval for R-448A and R-449A for use in stand alone refrigeration but made it subject to narrowed use. This means that it can only be used in very specific cases if the manufacturer properly documents the reasons and efforts they made to choose an alternative. In other words, there are lower GWP alternatives. Contrast this with the impression that I get in the industry when I speak with service technicians who are just adopting R-448A/R-449A.

In Canada, we have a federal policy and regulation guiding this process. In the U.S., individual states are picking up the slack caused by a host of recent deregulation and more ambitious climate targets. California, for example, is on pace to achieve Kigali level reductions in less than 10 years. Since our economies are closely tied and equipment availability is interconnected, the U.S. regulations can influence Canada significantly.

If one thing is clear, it’s that the new transition is just the beginning and we have many years of uncertainty to look forward to. Hardly a week goes by where I am not asked what to do with R-22 equipment and I’ve also had several companies start discussions on how to transition air conditioning equipment away from R-410A. Before you discount this, there are already several “drop-ins” for R-410A in development and on the market. R-470A, for example, is not flammable and has a GWP of 909, less than half of R-410A. The uncertainty makes deciding what refrigerant to use quite hard. 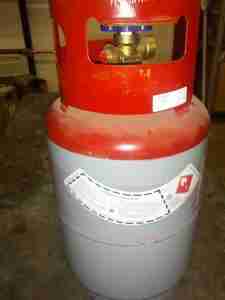 If the charge limits for hydrocarbon refrigerants increase, larger reach-in and display cases will be available that use propane.

In direct expansion air conditioning, there are no easy options at the moment since the A2L refrigerants are not readily available and our safety codes haven’t kept pace to allow their use, but in custom built refrigeration equipment the choice sometimes feels endless. The low GWP refrigerants are not always easy to get, our safety standards have not been updated to allow the use of A2L refrigerants and there is not a lot of knowledge in the technician and contractor base about the alternatives. This means that we sometimes choose refrigerants today that we know are not going to be the best choice next year.

It is not surprising that we are seeing more and more marketing material geared toward the use of natural refrigerants for commercial and residential applications. Hydrocarbons, CO2, and ammonia are seeing a resurgence and there is serious merit in considering them for many applications.

There is also a movement afoot to increase the current charge limits for hydrocarbon refrigerants; if this limit increases, larger reach-ins and display cases will be available that use propane or isobutane.

There is no easy one size fits all choice (yet?) and the consumer’s frustration with the synthetic refrigerant merry-go-round is understandable. I still remember quite vividly getting yelled at by a grocery store owner when I told him I had to replace his R-401A (MP39) that he’d just put in a couple years before to replace the R-12 because the R-401A was now being phased out. At the time, HCFCs like R-401A were marketed as interim replacements. It’s starting to feel like all refrigerants are just interim replacements.