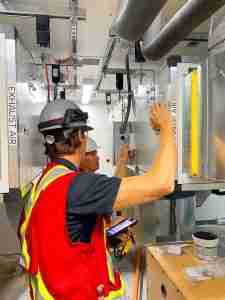 Technicians from Oxygen8 installed a new ventilation system at the Monashee student residence at the University of British Columbia in Kelowna.

Researchers say the pandemic has accelerated an existing trend toward more remote work. This will likely affect the design of homes, workplaces and new conditioning devices.

In this article, we focus on projects and products related to the first two, ventilation and heat recovery. In the past, energy recovery ventilators (ERVs) and heat recovery ventilators (HRVs) have mostly been separate units. Some are now packaged into heat pump combos that provide heating, cooling, fresh air ventilation and optimized energy efficiency in one smaller, smarter appliance that is integrated with other electronic building systems. 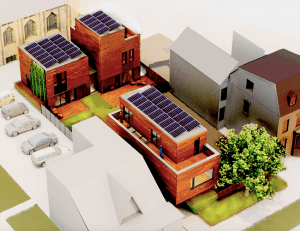 “I think this project really checks a lot of boxes when it comes to modern approaches for city buildings,” says Rob Blakeney, one of the pioneers in the Ontario building decarbonization movement. “It’s an urban infill project, and a laneway project built to the Passive House Standard. The mechanical system consists of a conditioning energy recovery ventilator (CERV) from Build Equinox, a cold climate inline duct heater, and an earth tube.”

The university owns enough property to build up to 40 more laneway houses near its downtown campus. Most are old single-family homes rented over the years by faculty or student families. The school is trying to develop a prototype model for their revitalization with BSN Architects, Guelph Solar and Blakeney’s firm, Local Impact Design. In this case, two dilapidated houses were replaced with a daycare playground and three new homes, one fronting on Huron Street at 2,100 square feet and two in the category of laneway houses on the same site at 1,100 and 900 square feet respectively. 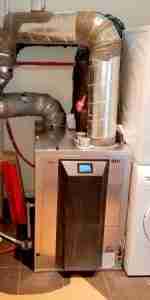 The CERV2 units use es a high-efficiency heat pump to exchange energy between incoming supply and outgoing exhaust air.

The homes will use just 30 per cent as much energy as a home built to the existing building code. Energy Use Intensity (EUI) will be 46 per cent of what would be permitted under ASHRAE Standard 90.1 and they will use 51 per cent less water. Energy use and air tightness for all three structures meet Passive House requirements.

In addition, when one of the old houses was being demolished and the basement backfilled for the playground, an earth tube was installed at the foundation level to provide pre-warming or pre-cooling, which accounts for approximately 30 per cent of the energy reductions.

Although it’s part of the name, Build Equinox’s conditioning energy recovery ventilator (CERV) does not employ an ERV or HRV core. Instead, it uses a high-efficiency heat pump to exchange energy between incoming supply and outgoing exhaust air. Both the condenser coil and evaporator coil are located indoors, boosting efficiency in some regions. We reported on the CERV a few years ago, but he CERV2, has some new features.

It uses an 18W UVGI (Ultraviolet Germicidal Irradiation) light source that produces broadband 250-260nm UV-C without ozone production. This delivers over 5W of UVGI for a single pass kill efficiency of 85 per cent. UVGI radiation disrupts genetic material in microorganisms, providing an additional layer of protection to efficiently destroy microbes in the air as it circulates through a CERV ventilation system. These microbes contribute to allergies, poor indoor air quality, and airborne disease transmission, but also can impede system efficiency and clog condensate lines.

The CERV2 can adjust and optimize efficiency with its variable-speed compressor and fan control. It can also shut down motorized dampers connected to outdoor grilles, circulating only indoor air. Or it can bypass heat recovery and use only the fans. “It’s like opening the windows when it’s nice outside,” says Blakeney. On Huron Street, they added on the CERV inline duct heater (1.0, 2.5 or 5 kW) which provides occasional backup heat in cold climates. 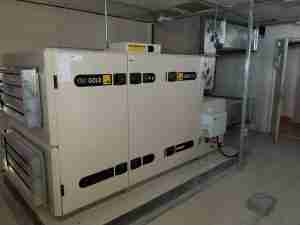 A Swegon Gold RX air handling unit in a Windsor high-rise provides air flows up to 16,300 cfm and temperature efficiency up to 85 per cent.

Such was the case with a 1975 20-storey residential apartment building in Windsor, Ontario. Previously, a project might have been levelled rather than retrofitted, when costs were different and embedded carbon was rarely discussed. The retrofit cost $69 per square foot, compared with $273 per square foot for new construction.

They installed new windows, patio doors, exterior mineral wool insulation, cladding and kitchen hoods; and reduced the number of residential apartments from 303 to 299, freeing up some areas to house a Swegon air handling unit. They left the electric baseboard heaters in place for backup and improved sealing around existing through-wall AC units. Operational savings are 65 per cent on energy, or about $300,000 per year. Tenant comfort is greatly improved, and emissions have been cut by 64 per cent.

The Swegon Gold RX provides air flows up to 16,300 cfm and temperature efficiency up to 85 per cent. The rotary heat exchanger is also available in a sorption version (RECOsorptic), which increases the energy efficiency further through the product dehumidifying or recovering moisture depending on the conditions and needs.

James Dean, an ERV equipment design veteran and CEO of Oxygen8, says the changes at Monashee, a 186-student residence at the University of British Columbia in Kelowna, are typical in a world that is now more focused on indoor air quality. The 1992 building’s poor ventilation had been deteriorating for years, and suddenly became a priority.

The company’s products are designed for compact places in a multi-unit project., They fit in an elevator, which helped with the complete replacement of the ventilation system through Reinbold Engineering between April and September of last year.

Dean says Oxygen8 will soon launch products with even higher efficiency and establish a second assembly plant in Ontario, to complement their existing west coast plant.

As we emerge from the pandemic, more big changes are likely coming. Innovative technology solutions, such as the following can help with different buildings, better buildings, clean energy and healthy indoor air. 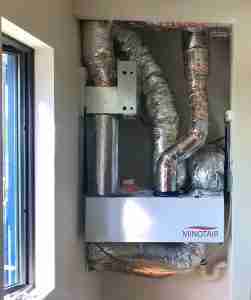 The Minotair Pentacare-V12 compact air treatment unit is being used in tight envelope single-family homes and condo units in Ontario, Quebec and elsewhere. It controls ventilation, temperature, humidity, and provides MERV 13 filtration at 20 to 180 cfm of fresh air in air exchanger mode, 80 to 250 cfm of filtered air in recirculation mode.

The Ventacity is a commercial size, high-velocity unit that was recently installed during a retrofit of a warehouse into law offices in Tarrytown, New York. Nine ageing rooftop packaged units were replaced with four Ventacity VS1000 heat recovery ventilators and a VRF system, while the lighting, windows and building envelope were also upgraded. EUI dropped by 71 per cent, from 57.4 to 19.4 kBTU / ft2 / year.

A 16,000 square foot Seattle airport building for passengers from 200,000 flights per year was also retrofitted, in this case, with three RT units and a new VRF heating and cooling system. It cut costs and EUI from 152 to 48 kBTUH / ft2 / year, and improved indoor air quality.