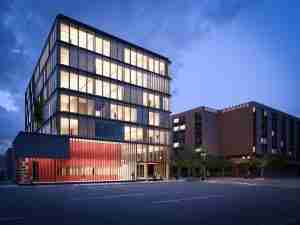 The Wood Innovation and Design Centre (WIDC) in downtown Prince George, B.C., is constructed using a repeatable and expandable system to use on other building types and sizes. B.C. was the first province to allow for 12-storey mass timber construction. Image provided by Province of British Columbia.

Alberta has added variances to the Alberta Building Code to allow encapsulated mass timber construction (EMTC) of buildings up to 12-storeys.

“A variance provides an alternative solution of approximately equivalent or greater safety performance to the prescriptive requirements of the codes. Any construction that complies with this variance is permitted just as if the building was constructed under code requirements,” the Alberta government said in a Standata released on Feb. 19.

The upcoming code provisions will also include additional requirements for fire protection during construction and ongoing maintenance.

Alberta has announced it will automatically enforce the national codes with minimal provincial variations 12-months from the publication date. “In order to advance the use of EMTC in Alberta, this variance will permit EMTC up to 12-storeys in building height anywhere in Alberta provided the conditions in this variance are complied with,” said the Standata.

“The combustible/non-combustible construction classification system was introduced in the National Codes over 50 years ago and is increasingly being regarded as being outdated and unnecessarily restrictive,” the Standata noted.