Ottawa, ON — The battle for which province/territory ranks as the most energy efficient has come to an end and the results are in. Each year,  Efficiency Canada releases its Canadian Energy Efficiency Scorecard, which assesses energy efficiency policies introduced or implemented by provinces. The 2022 scorecard was based on data collected between January 2021 and June 2022.

The fourth annual rankings are as followed:

This is the first year that the Yukon was included in the scorecard. “For the first time, we were able to include the Yukon in our full analysis of energy efficiency policy outcomes and policy, and we continue to work toward full inclusion of Northwest Territories and Nunavut in future years,” according to the report.

One of the biggest impacts on energy efficiency in 2021 was the official release of the federal government’s 2020 model building codes. Although it is still too early for any province to have adopted the new codes and few have put in place plans to adopt the new codes on accelerated timelines, according to the scorecard.

At the time of writing, no province has adopted the 2020 model codes, though some have given indications of adoption more quickly than suggested by the Construction Codes Reconciliation agreement.

It should also be noted that only British Columbia, PEI, and Yukon have included commitments to have net zero energy-ready building codes in place by a specific date.

Although New Brunswick published a climate plan in September 2022, which sets commitments for net zero energy codes by 2030 and for the province to adopt the 2020 codes in 2023. This was not included in the scorecard as it was published out of its 18-month scope.

Over the past year, there were several major events that were highlighted by the province, via the scorecard. Each province or territory was then broken down based on strengths and opportunities.  See the table for more details. 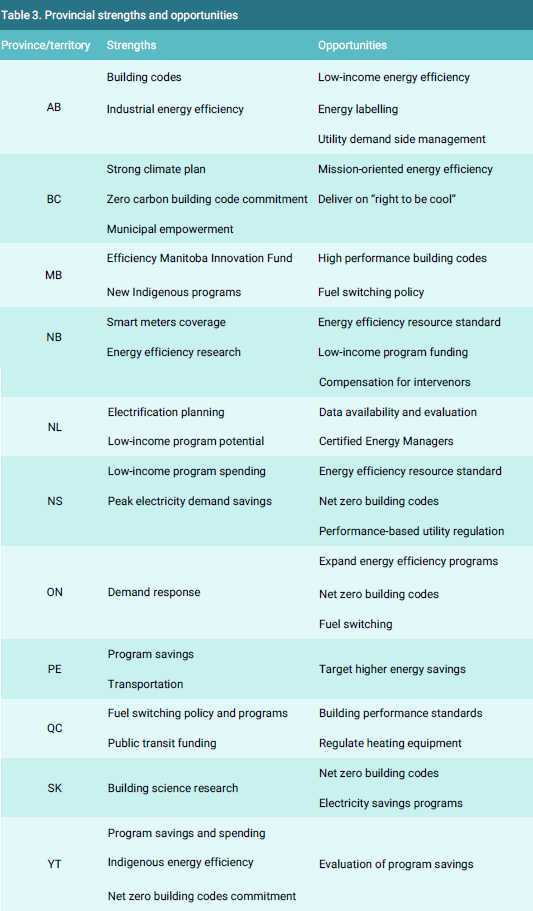 As part of the scorecard, Efficiency Canada considered the role federal policy has in supporting better provincial energy efficiency performance. For this year’s report, there were five key areas for action — expanding the scale and scope of low-income energy efficiency, mandating efficient and zero-carbon heating, defining net zero building performance standards, integrating with provincial programs to “crowd in” more funding, and creating targets and expectations for provinces.

As mentioned prior, British Columbia, Nova Scotia, and Québec retained the top three spots. British Columbia has remained on top since the introduction of the scorecard in 2019. This is the first year that Nova Scotia has reached the silver medal slot, having increased its position on the scorecard from fourth in 2019 and then bronze in 2020 and 2021.

According to the report, British Columbia continues to lead in enabling policies and buildings. Quebec placed first in transportation and industry this year, while Nova Scotia’s performance in the programs section helped boost it to first in that policy area and second overall.

“Prince Edward Island and Ontario traded places. Prince Edward Island improved its performance in the programs area, and its net zero energy ready buildings by 2030 commitment helped to boost it slightly ahead of Ontario (which also improved in electricity savings),” according to the scorecard.

Efficiency Canada’s previous scorecard determined a decline in national energy savings, which peaked in 2017. However, data from the 2021 program suggests this trend has been reversed, with net annual incremental energy savings rebounding at 30.5 per cent over 2020 levels, hitting a total of 18.7 petajoules.

Natural gas savings also increased by approximately 1.3 petajoules or 19 per cent. As was the case last year, electricity savings in Ontario are the principal reason for the reversal, though savings also jumped substantially in Alberta.

Efficiency Canada states that the federal government acted upon all recommendations made in last year’s scorecard.