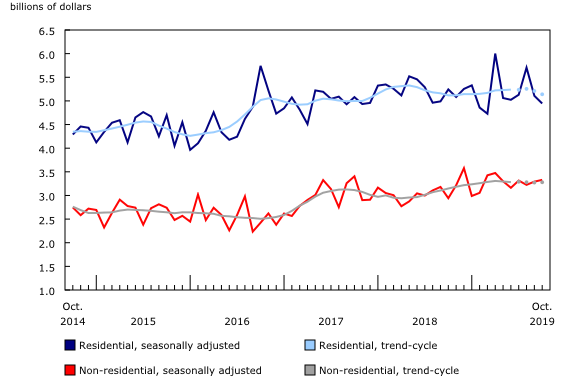 Value of building permits for the residential and non-residential sectors.

The total value of building permits issued by Canadian municipalities decreased by 1.5 per cent to $8.3 billion in October. This was the result of five provinces reporting declines, with the largest decrease in British Columbia, which was down 21.2 per cent to $1.3 billion. Quebec offset some of the decline with a significant increase of 12.3 per cent to $1.7 billion.

The institutional sector saw a sizable increase of 24.9 per cent to $765 million in October. This was largely due to gains in Manitoba and Ontario – $79 million and $72 million, respectively.

It was a good month for Manitoba, which reported gains in all categories of permits in October. The province saw the total value increase 74.3 per cent to a record high of $438 million. This increase was largely attributed to a high value of permits issued in Winnipeg. The mixed-use development True North Square in the heart of downtown drove gains in both multi-family and commercial permits.

Institutional permits reached their highest value since April 2003, largely due to an expansion at Red River College.

Major upgrades to a water treatment plant in Brandon, Man. significantly contributed to the value of industrial permits, which more than doubled compared with the previous month.