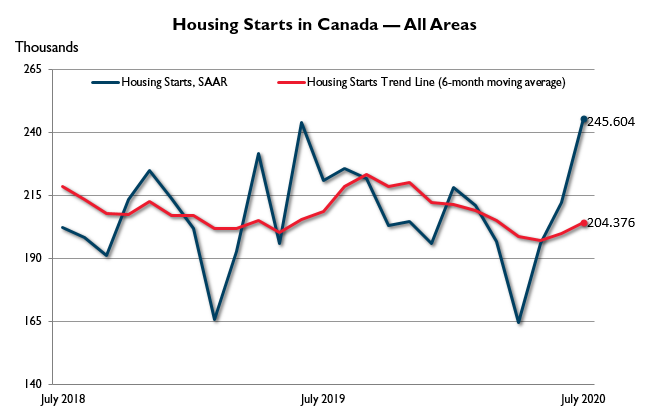 Ottawa, ON — Following declines in previous months from COVID-19 measures, housing starts in Canada rose in July, according to the Canada Mortgage and Housing Corporation (CMHC). This trend measure is a six-month moving average of the monthly seasonally adjusted annual rates (SAAR) of housing starts.

Rural starts were estimated at a seasonally adjusted annual rate of 13,609 units.

According to CMHC’s chief economist, higher activity in June and July leaves the trend in housing starts in line with the long-run average level of housing starts. “Higher multi-family starts in major urban areas, including Toronto, Vancouver and oil-producing centres in the Prairies drove the national increase,” said Bob Dugan. “We expect national starts to trend lower in the near term as a result of the negative impact of COVID-19 on economic and housing indicators.”

In Toronto, housing starts jumped 22 per cent to 48,466 units on an annualized seasonally adjusted basis. New construction also climbed in more affordable areas outside of Toronto, such as Hamilton and the St. Catharines-Niagara area.

In Calgary, Edmonton and Saskatoon, cities that have suffered from two oil price crashes in a decade, new construction jumped from June to July, but remained below pre-pandemic levels. In Atlantic Canada, housing starts more than doubled in Halifax, Saint John and Moncton.