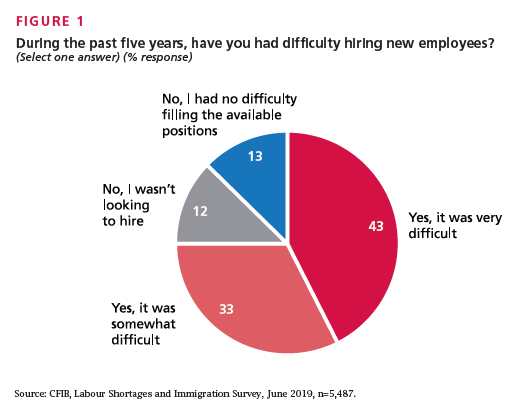 The Canadian Federation of Independent Business (CFIB) is calling upon the government to make changes to the immigration system to help employers connect with workers. They are asking the government to create an “Introduction to Canada Visa” as a pathway to permanent residency for foreign workers in high demand sectors.

The current immigration system is not meeting the needs of small and medium-sized employers who are facing labour shortages, reports CFIB. “Our immigration system does not make it easy for smaller employers and immigrants to connect and work together,” said Corinne Pohlmann, CFIB’s senior vice-president of national affairs.

“Employers who use the immigration system to fill a vacancy face a complex web of red tape and high costs, especially if they are hiring a temporary foreign worker. Once workers are in Canada and have become integrated in their communities and workplaces, it can be extremely difficult to retain them because there are limited pathways to permanent residency, especially for those with lower skill levels.” A full report titled “Workers without borders: Addressing SME labour shortages through immigration,” was released by CFIB on the issue.

The majority of labour shortages in small businesses are for jobs that require a college diploma or apprenticeship (46 per cent), or a high school diploma or on the job training (31 per cent).

Small business owners who cannot find a worker locally may turn to the Temporary Foreign Worker (TFW) Program, reports CFIB. When working through this system, employers must fill out several forms, pay non-refundable fees, and wait six to 12 months or more to receive approval before they can begin recruiting.

“When small business owners turn to the immigration system to fill a vacant position, it’s because they have tried everything else and run out of options,” explains Emilie Hayes, senior policy analyst at CFIB and lead author of the report. “The cost and stress they have to go through to recruit a foreign worker wouldn’t be worth it if this wasn’t their last resort to keep their business operational, and sometimes keep their Canadian workers employed as well.”