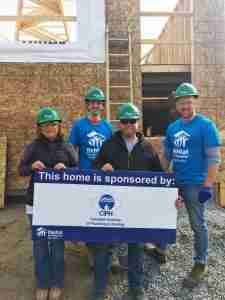 In 2019, CIPH sponsored a build in Nova Scotia.

The Canadian Institute of Plumbing & Heating (CIPH) and Habitat for Humanity Canada are celebrating a 25-year partnership that might be described as a “perfect marriage” – over-used as that phrase may be. But in this case, it really is.

“We have always looked at Habitat as a partner that fits so perfectly with our industry,” said Brent Cornelissen, president of OS&B, Oakville, Ont. and 2018-19 CIPH Charity Committee chair.

“It’s been a great partnership and one that has provided leadership to some of our other partnerships,” added Rob Voisin, senior vice president, operations, for Habitat for Humanity Canada, Toronto.

The organization builds homes for Canadian families that would not otherwise be able to afford one. CIPH members have donated over $14 million in cash and products and CIPH has also sponsored 14 Habitat builds, one of which was a 13-unit townhouse complex.

Elected to the CIPH board of directors in June 1993, he suggested that CIPH adopt Habitat for Humanity Canada as a national charity. “I’d watched a PBS documentary on Habitat and how it started in Manitoba around that time. It really inspired me. I thought, what a great thing they do because it’s a ‘hand up, not a hand-out,’ but, more importantly, I realized that these guys needed plumbing products. The board agreed on one condition; ‘if you want to do an industry-wide fundraiser, you get the job of chairing it.’ That was their way of welcoming a new member!”

The group started in 1994 and held its first CIPH Habitat Gala in Support of Habitat for Humanity at the Royal York Hotel in downtown Toronto on the eve of the CMX Show. It was a black-tie event and drew industry leaders from across Canada. Comedian Don Harron donated his time to entertain in his role as farmer Charlie Farquharson.

“Our goal was $100,000 and we ended up with $125,000, but most of that was product.” For de Jong, the goal was to make the campaign self-sustaining. “I think at the beginning that dinner really helped because a lot of the manufacturers went. The next time around it was a lot easier to ask for donations.”

Support for the campaign grew. “It was slow in the first and second year, and then it just took off,” remembers de Jong. Industry people are competitive. If one faucet manufacturer wanted to do all the faucets that Habitat needed, a competitor would want to do more. 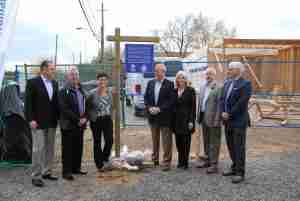 There were three stainless steel sink manufacturers. “We actually split the sinks three ways,” recalls de Jong. “If their budget was 150 homes, we each supplied 50 sinks.”

This created a problem. Habitat couldn’t store 150 sinks. Around 1997, CIPH launched a certificate program, where each Habitat build would receive an envelope with certificates for the different plumbing and mechanical products needed on each build. They could then redeem them at a local CIPH wholesaler for products as they needed them.

But often Habitat has special needs. “CIPH is always open to us providing materials take-off lists and special requests. They go back to their membership and they are often able to support us,” said Voisin. “We could certainly use more in the HVAC space than we’ve got, especially when it comes to things like furnaces and HRVs.”

CIPH brought the Electro Federation of Canada and the Heating, Refrigeration and Air Conditioning Institute of Canada (HRAI) into the Habitat program to help source equipment not supplied by CIPH members.

Over the past two years, the Canadian Mortgage and Housing Corporation (CMHC) has also come on board, bringing $32.4 million over three years from 2019 to 2021 to build affordable housing.

CIPH members wanted to do more. “We always wanted to do a build and, at that time, you needed a $75,000 cash donation to have a build put in your name, so it took us a couple of fundraisers before we had that kind of cash,” said de Jong.

“CIPH has supported us (financially) and also brought a ton of product and tradespeople to these builds,” remarked Voisin.

The first CIPH build took place in 2003 in Niagara Falls, Ont. Members attending the CIPH Annual Business Conference that year took a bus to the home to watch the handover of the keys to the family. “It was a very special moment,” recalled de Jong.

Habitat has also developed a retail operation to raise money. Today it operates 110 ReStore locations across Canada. “With CIPH, we are here to support them with their obsolete or problem inventory and we can mobilize 160 trucks at any given time,” said Voisin. The donor receives a “recognition and acknowledgement” receipt.

But that raises a question. If a member donates its unsold stock, do they end up competing against their own products? Habitat works hard to prevent that, said Voisin, diverting products away from certain markets at the donor’s request.

“They don’t really look at it like that because once it’s gone, it’s gone,” added Cornelissen. Two years ago, OS&B donated 2,000 toilets. “The word got out and everybody knew that, if you wanted a cottage toilet, go pick one up at ReStore – it’s 50 bucks.”

Sometimes a CIPH company will contact their local ReStore directly to donate product. Cornelissen urges members to let CIPH know so that it can be added to the fund-raising tally.

Not surprisingly, this year’s COVID-19 pandemic created challenges for CIPH and Habitat.

“The good news is, we were able to exceed our (fund-raising) target,” reported Cornelissen. When the final number was in, CIPH members had donated $2,140,000 against a goal of two million, with $1.5 million of that in product for ReStores.

However, the 2020 CIPH Habitat Gala was cancelled, as was the CMPX Show. “It was disappointing because it’s the 25th anniversary for the (CIPH partnership) with Habitat for Humanity,” said Cornelissen. All is not lost, however. The committee plans to auction off the items donated for the Gala in a virtual silent auction before the end of July and that money will be credited back to the 2018-19 campaign.

Habitat builds have also been pushed back. Voisin expects home completions to be down 25 percent in 2020. “We will probably start the same number we intended, but because of the timelines we probably won’t get them all done in this calendar year.”

The relationship between the Canadian Institute of Plumbing & Heating and Habitat for Humanity remains strong.

“To get the thing started and tap into the innate goodness of people is one thing, but to see it become a machine that rolls on its own, it inspired people and through that inspiration it just built and built. That’s where its been for the last decade and I don’t see it going anywhere else but continuing,” said de Jong.

Cornelissen isn’t sure where the partnership will be in 25 years. “It’s not so much that I can see CIPH changing, but I can see Habitat changing.” They may take a different approach to builds, he added. “But as long as they continue doing things the way they are, the relationship will remain strong.”

“I see the relationship continuing to grow. The need for affordable housing in Canada is growing, not shrinking. CIPH continues to be the gold standard for our organization in what partnerships mean and look like and our goal is, as we build more, to have our partnership grow more,” said Voisin.