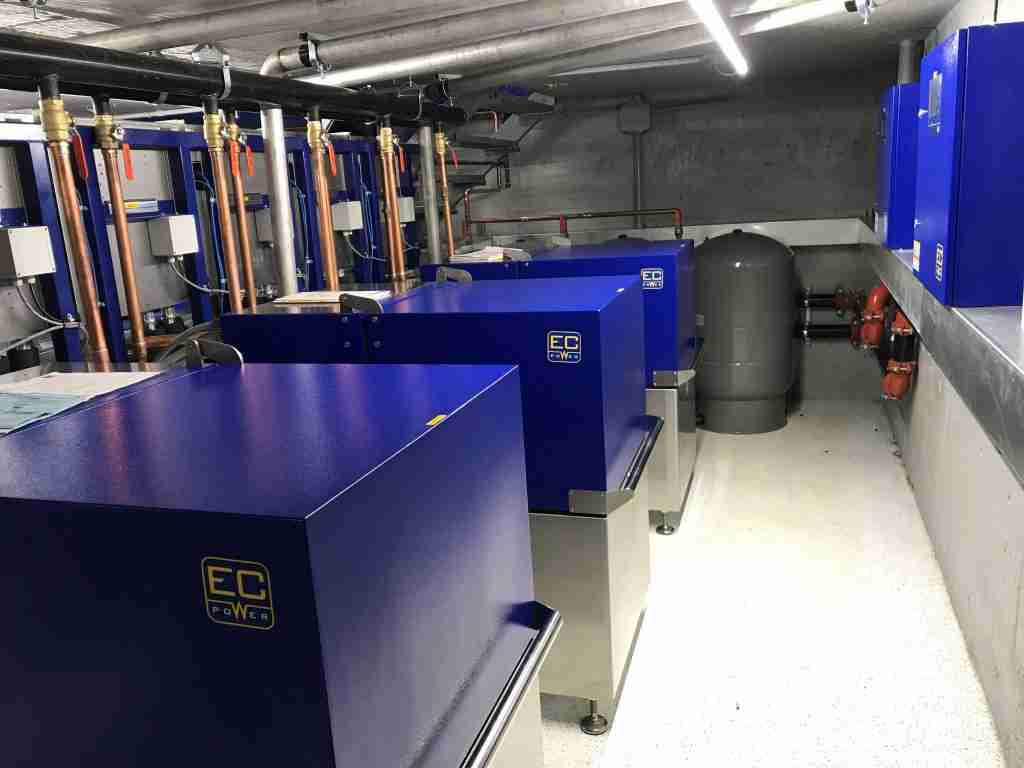 Combined heat and power systems are not new, but they are getting smaller to cover more applications. New to the North American market are micro-CHP systems, producing up to 50 kilowatts of electricity, aimed at small commercial and institutional applications. Already widely used in Europe, at least two manufacturers are marketing micro-CHP units in North America and others are sure to follow.

“The ability to get supplemental power while at the same time getting hot water is something we’re looking at because there are a lot of areas in Canada and the U.S. where the grid is stressed. We need supplementary power and we need to do it with clean energy,” remarked Tommy Olsen, market segment manager for Lochinvar, Lebanon, Tennessee.

And as governments and utilities look to reduce greenhouse gas emissions while electrical utilities want to reduce stress on the grid during peak periods, combined heat and power systems have a number of things going for them.

“This is a new direction for Lochinvar,” noted Olsen. “One of the things that we’ve looked at is our boilers are 96 to 98 percent efficient, we’ve got sophisticated electronics and 25-1 modulation. The question came up, where do you go from there?”

For the past five years, Lochinvar has been exploring micro CHP technology. The result was a partnership with EC Power in Denmark announced in April 2018.

As a result of this collaboration, on Jan. 14 Lochinvar introduced its XRG125 micro-CHP unit. “It was a good fit with our product line and our customer base,” said Olsen. “The long-term goal is to offer alternatives to our customers that go beyond the traditional heating of hot water with a boiler.”

Yanmar launched its CHP business in 1998 with a 9.8 kW model. Today it offers natural gas and propane-powered models in five and 10 kW versions and a 35 kW natural gas version.

There are a number of companies that offer micro CHP systems in Europe but haven’t yet brought the technology to North America.

“Viessmann does manufacture and sell micro and commercial CHP units in parts of Europe.  There are currently no immediate plans for market introduction of these products here in Canada,” reported Jerry Leyte, director, sales and marketing, for Viessmann Canada.

How do they work?

A combined heat and power system is simple in principle. A natural gas (or propane)-fueled internal combustion engine drives a generator or alternator to create electricity. Waste heat from the engine, the exhaust, and the electrical components are used to heat hot water, either directly or through a heat exchanger.

Micro cogeneration plants – up to 50 kW – fit into the most popular DHW heater market for small commercial buildings – replacing the 100-gallon 200,000 Btu/h tank type. “Our system is putting out 163,000 Btu’s, so it will fit into the most widely used product range in the market,” reported Olsen.

As a result, the target market is hotels, colleges, multi-family, agricultural buildings, etc. or “any place that has a constant demand for hot water.

Every building has a steady load for hot water, whether it’s DHW, hydronic heating, snow melting, etc. “With this (micro CHP) system we are providing a baseload of heat to that building while simultaneously giving some 24 kW’s of electricity and producing that heat from a single gas source,” said Olsen

Designed to integrate seamlessly with current mechanical and electrical systems, current installations use a small backup boiler for peak applications, he added. “If the demand goes beyond that of the co-gen system, we can use a backup boiler to provide that supplemental heat.” 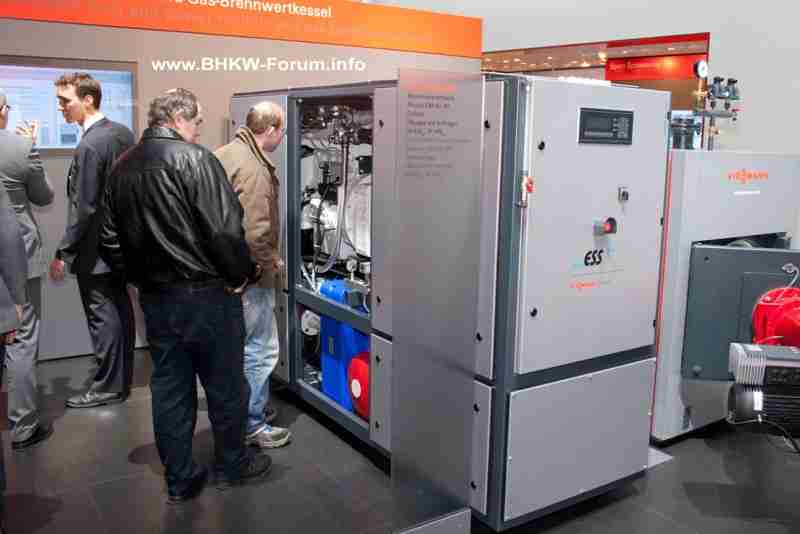 The backup on the electrical side is the grid. The Lochinvar system is an induction system, as opposed to a “black start” system that uses a backup generator to start the system in a power failure. That means it doesn’t have the expense of a backup generator, capacitor bank and/or battery bank.

“The utilities are more favourable to this system because if the grid goes down, we go down, so there’s no risk of us putting power back into the grid while they are working on the system.”

The system at Steeple High Farm uses Yanmar’s blackout start option, avoiding the need for a backup generator in the event of a power failure. The customer runs the 10 kW unit in blackout mode continuously which allows continuous heat and power even if the grid is down, the company reported.

The electricity bill is reduced because the micro co-gen plant can produce power at a lower cost due to better efficiency. There are no transmission losses. But that’s not the only factor. “The other thing is that it reduces what’s called demand charges or ratcheting charges. The power companies look at the operation of a building in 15-minute increments and find out in what increment your building uses the maximum amount of power and they peg your demand charge there because they have to be prepared at any given moment to provide that amount of electricity… When we’ve looked at electrical use in buildings 50 percent of their cost could be in demand charges, so we can reduce that peak demand by providing supplemental power,” said Olsen.

Sophisticated engines and controls minimize natural gas use. Lochinvar uses a four-cylinder Toyota internal combustion engine that is certified as a stationary engine. “The stationary engine standards for a mechanical room are very similar to that of a boiler,” noted Olsen. “So, we don’t have any issues with the building codes.” The entire micro-CHP unit is certified to ECL, UL, CSA and IEEE standards.

A typical installation in a 160-room hotel, for example, might look like this: “You could put two of these co-gens in and produce 350,000 Btu’s of hot water for heat and at the same time about 48 kW of power. With a 300,000 Btu/h backup boiler, you’ve got 650,000 Btu’s of heat, and that 48 kW is going to supply power for the common area lighting, the lobby lighting system, parking lot lighting and things like that, so it’s going to help reduce the bill,” said Olsen.

The contractor will find that, on the water side, the installation is similar to a boiler. Plumbing connections are the same – it’s just a different heat source. On the electrical side, with the Lochinvar unit, a licensed electrician is needed to run a 480-volt line from the power panel to the control panel and the power unit. “If you need a different voltage, we can transform it, said Olsen. The 480 volts starts the generator – it acts as a starter for the engine and, once the natural gas engine gets up to 1,850 RPM, the generator begins transmitting electricity into the building’s grid, back through the control and the same 480-volt line into the building’s power panel. Venting is stainless steel up to 150 feet vertical.

There needs to be space around it to perform routine maintenance. Maintenance intervals on the Lochinvar unit are every 4,000 to 6,000 hours, or once a year. The unit is designed to go 60,000 hours or more between engine overhauls – or about 10 years if the unit is running 16 hours per day. Annual maintenance is primarily for the engine – oil and filter changes, spark plugs, etc.

While micro CHP units are extremely new to the Canadian market, they seem to be catching on quickly. At the time of writing, Lochinvar had about 20 units operating in Ontario and another 10 in the West, reported Olsen. Most of the units operating in Ontario are for multi-family buildings while those in the West have been installed in agricultural buildings, he added.

With that kind of success, it’s probably only a matter of time until manufacturers that already have micro CHP units on offer in Europe bring them to the North American market. It’s a technology that contractors and engineers need to familiarize themselves with.