Combination space heating and hot water equipment has improved dramatically since the launch of a new CSA standard five years ago. But manufacturers are wondering why the provinces have been so slow to incorporate it into their building codes.

“Why do we have to fight and go to the government and say: ‘please put this in your building code?’” remarked Ramzi Handal, president of Tempco Heating and Sheet Metal Inc., Scarborough, Ont., a wholesaler, and founder of air handler manufacturer iFLOW HVAC Inc.

CAN/CSA-P.9-11 (R2015) – Test method for determining the performance of combined space and water heating systems (combos) – created a third party test method for determining the efficiency of combination systems that combine a condensing water heater with an air handler to provide space heating and DHW. Since it was first published in 2011, numerous manufacturers have had their products tested and the result has been a dramatic increase in both the performance and efficiency of these units.

“They’ve done all the work, but they are competing against stuff that is inefficient and doesn’t meet the performance standards in the manufacturer’s own brochures,” remarked HVAC designer Dara Bowser, owner of Bowser Technical Inc., Brantford, Ont. Every other heating device – furnaces, boilers, water heaters, etc. – have to meet strict performance standards, so why not combo systems? There have been many problems with these systems. Thousands have been installed and there have been so many consumer complaints that CTV’s W5 program did a special feature on the issue.

“The problem is that when you put two systems together – an air handler and a regular water heater – they perform differently than they do individually. People didn’t understand and did not have enough information on what happens when you put them together,” said Handal.
“Since the P.9 standard came manufacturers invested a lot of money to improve their product (so that it would pass the test). I don’t think it should be allowed to go to waste (by failure to incorporate the P.9 Standard in building codes),” he added. 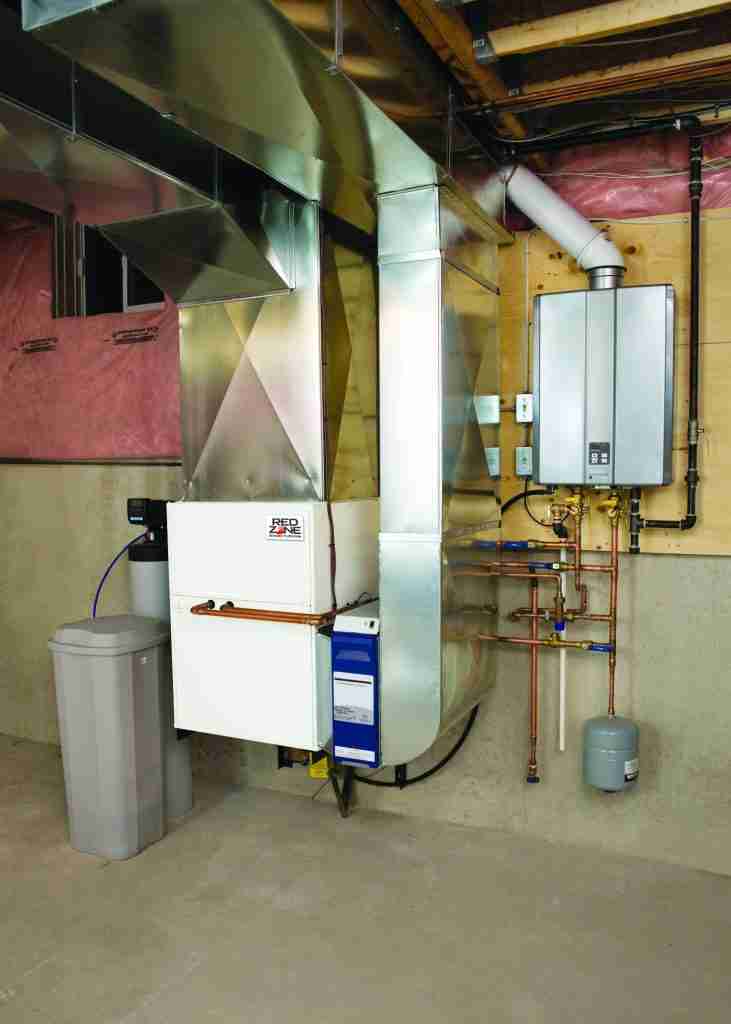 In this RedZone installation, a forced air furnace and water tank were replaced with a combo system to free up space.

While the standard is referenced in the National Building Code (Clause 9.36.3.10), only B.C. has added it to its provincial building code to date. Natural Resources Canada (NRCan) requires that integrated mechanical systems be tested to the P.9 Standard under its Energy Star for New Homes program (Sect. 4.3.2) and some provinces have picked up on that, remarked Chris Jakobson, product manager for RedZone, Mississauga, Ont., an air handler manufacturer.

“Other provinces seem to be starting to harness the idea of P.9 testing. Even though they may not request high scores, they are at least stating that a minimum must be met. That keeps a lot of the ‘me-too’ manufacturers out – those that put any old heat generator and air handler together and say they’ve got a combo system.”

He added that a number of municipalities in B.C. are requiring a thermal performance factor (TPF) of not less than 0.65. “That forces manufacturers to get their products tested and rated so that they can play in the game.”

Natural Resources Canada (NRCan) has been publishing P.9.11 test results on the Office of Energy Efficiency web site (http://oee.nrcan.gc.ca), adding considerably more detail since April, so that it is now relatively easy for heating designers to compare the test results of different units. Prior to that, designers just didn’t have enough information to make a sound decision, noted Bowser. 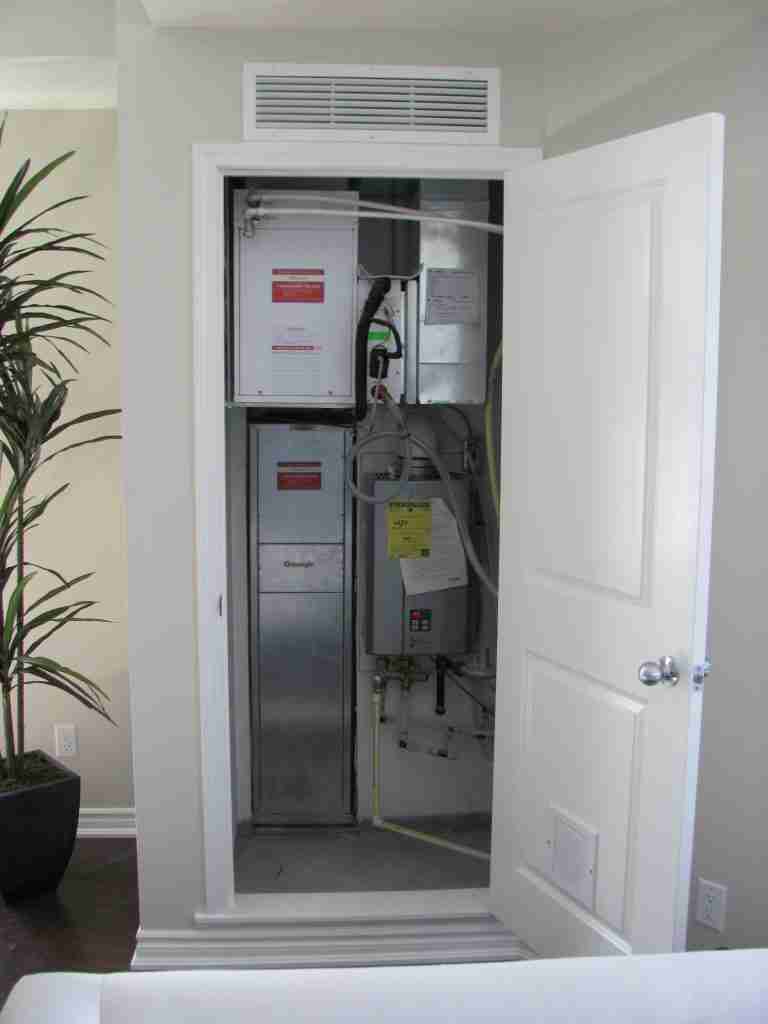 Space saving was a factor in this Ecologix installation too. The entire mechanical room – heating, AC and DHW – is located in a closet.

Bowser, with backing from a number of manufacturers, has been urging the Ontario government to reference the P.9 Standard in Supplementary Standard SB-12 of the Ontario Building Code, which covers energy efficiency. The proposal also has the support of the Heating, Refrigeration and Air Conditioning Institute of Canada (HRAI), which wrote a letter to the minister of housing.

On July 7 manufacturers won a small victory when the province published an amendment to SB-12, section 3.1.1.2, Energy Efficiency for Buildings Located in Zone 1 that lists the CSA P.9 standard as an alternate compliance path for builders. But it’s only an option, not a minimum standard, remarked Jakobson. “It’s been referenced, but nothing more to it than that. It recognizes its existence, but it just doesn’t feel like it’s being embraced.”

The first SB-12 compliance path allows a water heater with a minimum energy factor (EF) of 0.80, an AFUE of 90 percent “or of the condensing type.” However, a water heater with a 0.80 EF is typically a non-condensing unit. “There is almost four scenarios that can be met here to justify the use of a system,” said Jakobson. “It still seems like it’s an easy way out, to get that combo system in without a P.9 score.”
The vague wording will cause problems, agreed Bowser. “The use of the term “condensing type” to denote a minimum efficiency is indefinite and not referenced by any test standard, rating method or any accepted industry definition.”

There is still hope, however. “The ministry plans to conduct extensive public and technical consultations on any changes to the 2102 Ontario Building Code,” commented Ont. Ministry of Municipal Affairs spokesperson Conrad Spezowka in an e-mail. He added that details of the previous round of consultations, which closed Nov. 30, would be released shortly.

“Ministry staff continue to engage with stakeholders in regard to the implementation of Supplementary Standard SB-12 and the government’s energy efficiency objectives and climate change action plan and are available to meet with groups who may have information concerning the CAN/CSA P.9 Standard and its implementation.”

Tighter homes are among the factors driving the move to combo systems. “These systems are going to get more and more popular. For a thousand square foot house today, you need maybe less than 20,000 Btu/h for heating,” remarked Handal. At the same time, there is considerable space savings with the small size of the air handler and the small high velocity ducts that can be concealed within walls.

Much has changed since combo systems started appearing on the market 20 or so years ago. In the past, combo system manufacturers were primarily air handler manufacturers. It was up to the designer or contractor to figure out what to use for a heat source.

The P.9 test has driven partnerships between air handler and water heater manufacturers. “The P.9 process has allowed us to bridge the communications gap and the research and development between not only the air handler, but the heat generator,” said Jakobson.

RedZone, for example, has been working with Bosch. “They’ve enhanced their product to cater to our air handler… at the end of the day there’s only so much that can be done with the fan and the box.”

Sophisticated electronic controls, some with outdoor reset, and ECM motors are driving efficiencies like never before. In the new combo systems, as in other heating systems, the ability to match firing rates to demand is resulting in substantial energy savings. iFLOW will soon introduce an air handler with full modulation of both the pump and the blower motor. 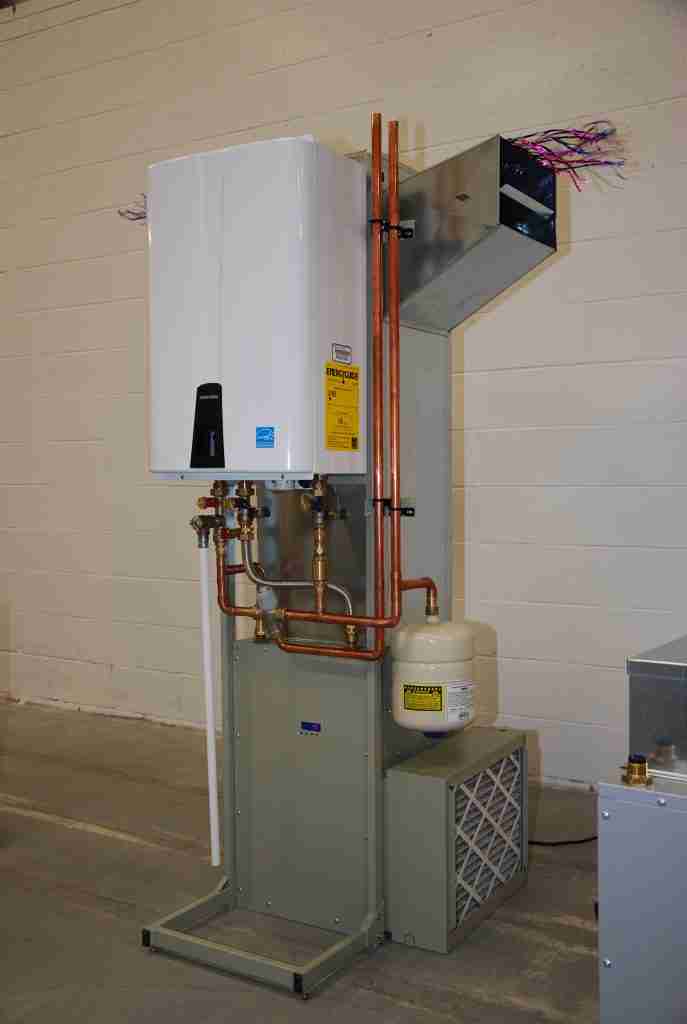 There are numerous options for zoning, either with hydronics, with a separate air handler for each zone or with zoning dampers in the air handler.

Of course, cost is always a factor. If building codes don’t require this level of sophistication, the builders won’t install it. In a retrofit, some homeowners will appreciate the comfort, efficiency and space savings.

The industry needs support from governments. Incorporating the P.9.11 standard into provincial building codes would change the market substantially because it would weed out the inadequate systems, giving the provinces an easy way to put an end to the numerous consumer complaints about combo systems, said Bowser.

“Everybody has known about this for 20 years and nobody has done anything about it. It’s time to do something. If the minister(s) want it to change, it will happen.”